1. “The marks humans leave are too often scars.” -John Green 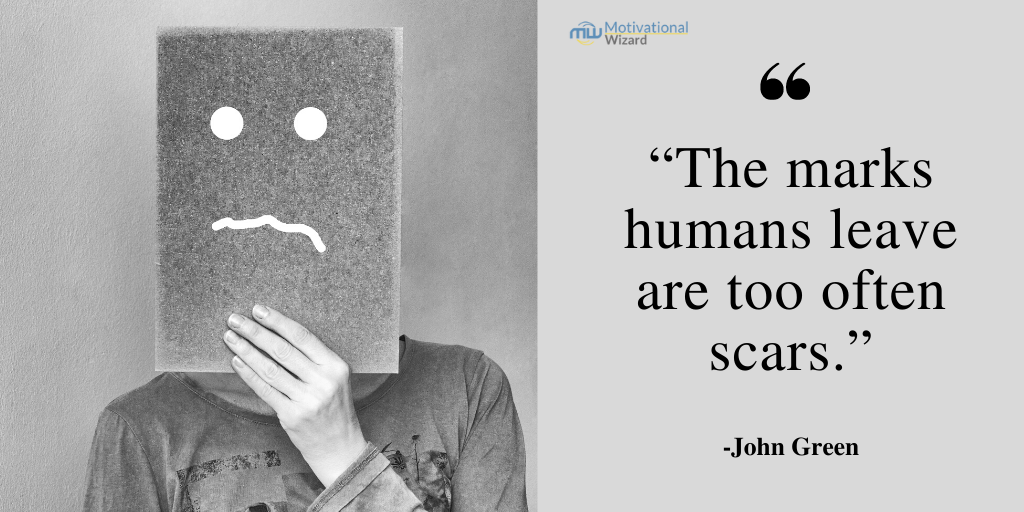 2. “It’s so hard to forget pain, but it’s even harder to remember sweetness. We have no scar to show for happiness. We learn so little from peace.” -Chuck Palahniuk

3. “Numbing the pain for a while will make it worse when you finally feel it.” -J.K. Rowling

5. “Life is pain, highness. Anyone who says differently is selling something.” -William Goldman 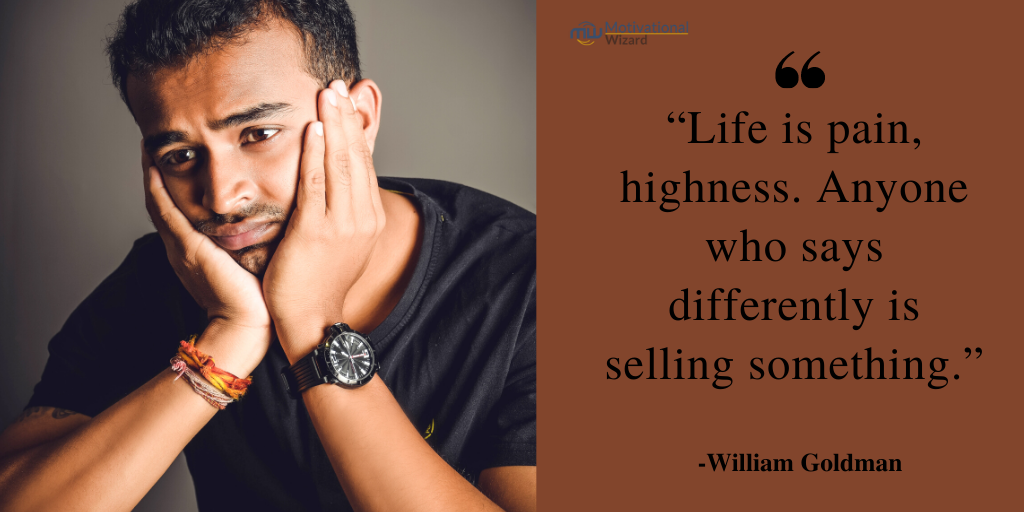 6. “The worst part of holding the memories is not the pain. It’s the loneliness of it. Memories need to be shared.” -Lois Lowry

7. “There are wounds that never show on the body that are deeper and more hurtful than anything that bleeds.” -Laurell K. Hamilton

9. “The most painful thing is losing yourself in the process of loving someone too much, and forgetting that you are special too.” -Ernest Hemingway 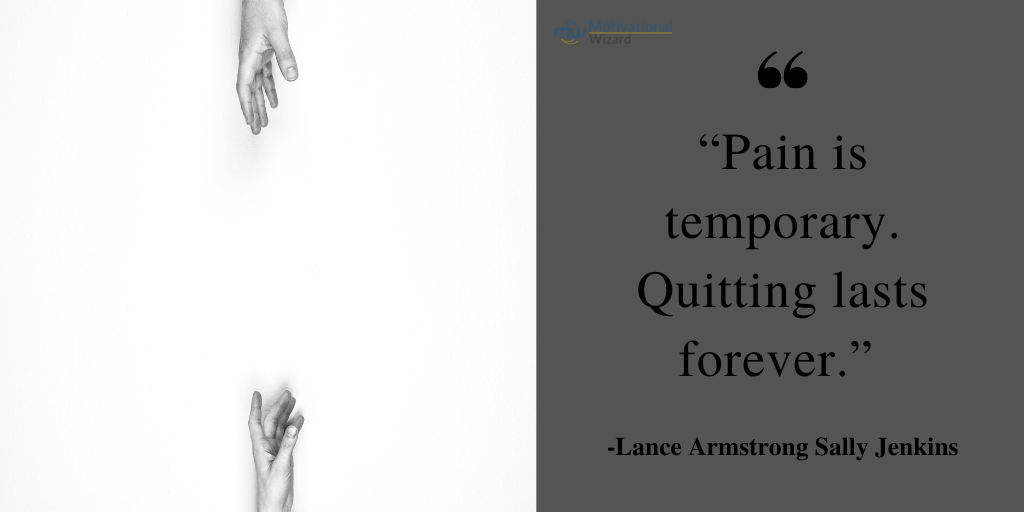 11. “It has been said, ‘time heals all wounds.’ I do not agree. The wounds remain. In time, the mind, protecting its sanity, covers them with scar tissue and the pain lessens. But it is never gone.” -Rose Fitzgerald Kennedy

12. “Imagine smiling after a slap in the face. Then think of doing it twenty-four hours a day.” -Markus Zusak

13. “Tears shed for another person are not a sign of weakness. They are a sign of a pure heart.” -José N. Harris

14. “Pain insists upon being attended to. God whispers to us in our pleasures, speaks in our consciences, but shouts in our pains. It is his megaphone to rouse a deaf world.” -C.S. Lewis

15. “One thing you can’t hide – is when you’re crippled inside.” -John Lennon 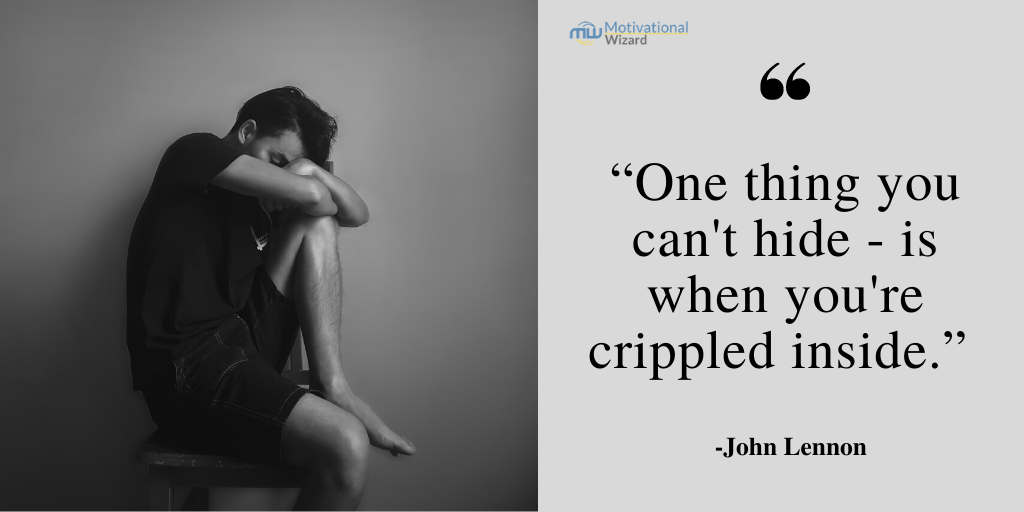 17. “Time was passing like a hand waving from a train I wanted to be on.I hope you never have to think about anything as much as I think about you.” -jonathan safran foer

18. “One word Frees us of all the weight and pain of life:That word is love.” -Sophocles

19. “Behind every beautiful thing, there’s some kind of pain.” -Bob Dylan

20. “You care so much you feel as though you will bleed to death with the pain of it.” -J.K. Rowling 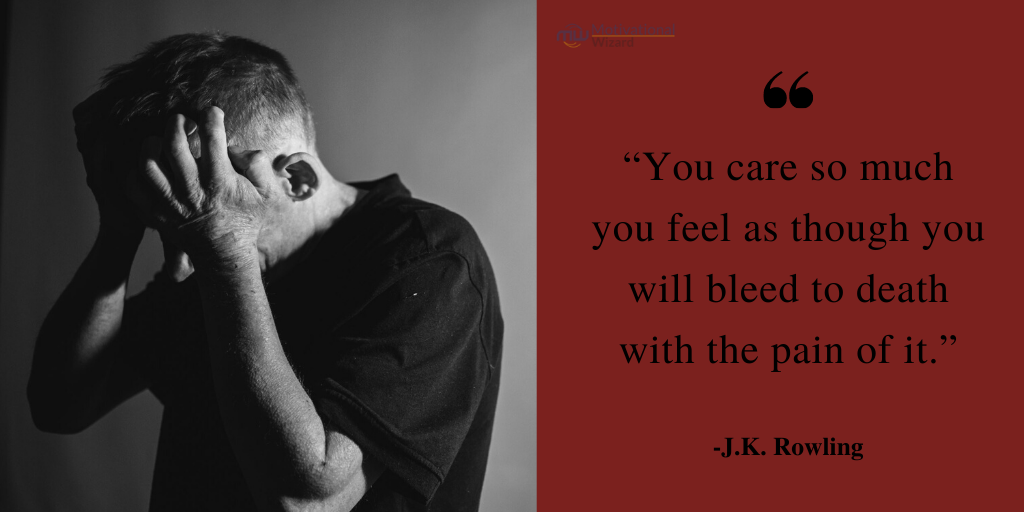 22. “I imagine one of the reasons people cling to their hates so stubbornly is because they sense, once hate is gone, they will be forced to deal with pain.” -James Baldwin

23. “There is a saying in Tibetan, ‘Tragedy should be utilized as a source of strength.No matter what sort of difficulties, how painful experience is, if we lose our hope, that’s our real disaster.” -Dalai Lama

24. “Do you not see how necessary a world of pains and troubles is to school an intelligence and make it a soul?” -John Keats

25. “Face your life, its pain, its pleasure, leave no path untaken.” -Neil Gaiman 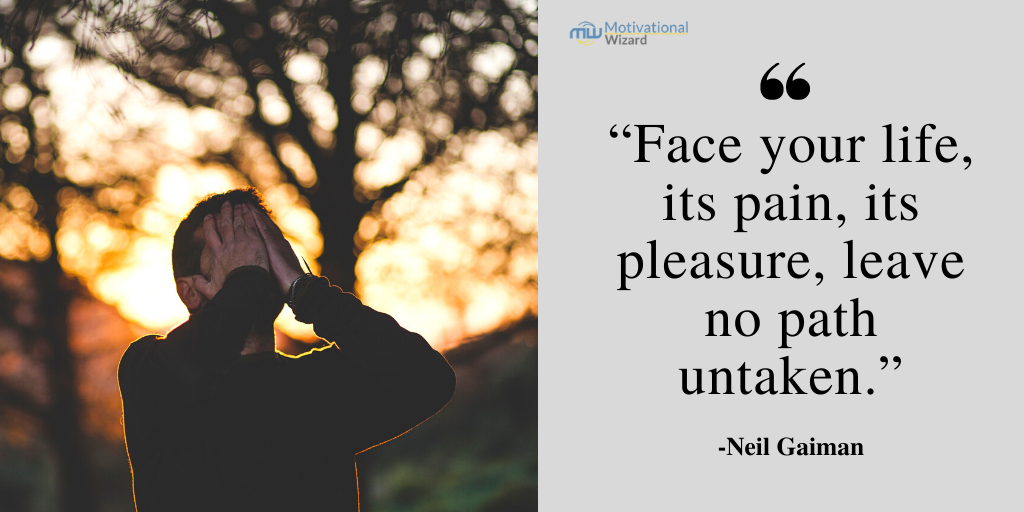 26. “Another secret of the universe: Sometimes pain was like a storm that came out of nowhere. The clearest summer could end in a downpour. Could end in lightning and thunder.” -Benjamin Alire Sáenz

27. “If you are distressed by anything external, the pain is not due to the thing itself, but to your estimate of it; and this you have the power to revoke at any moment.” -Marcus Aurelius

28. “But who can remember pain, once it’s over? All that remains of it is a shadow, not in the mind even, in the flesh. Pain marks you, but too deep to see. Out of sight, out of mind.” -Margaret Atwood

29. “You,” he said, “are a terribly real thing in a terribly false world, and that, I believe, is why you are in so much pain.” -Emilie Autumn

30. “Our wounds are often the openings into the best and most beautiful part of us.” -David Richo 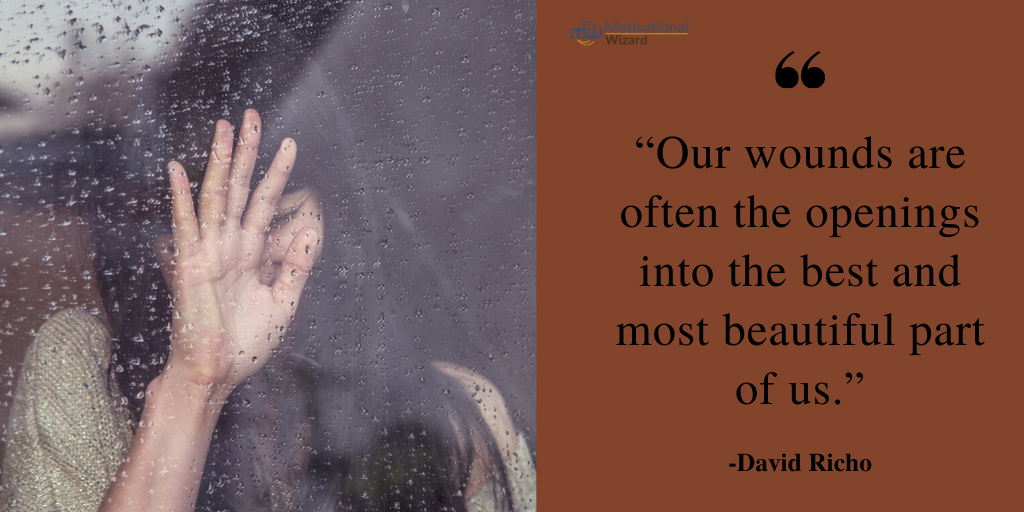 31. “If you spend your time hoping someone will suffer the consequences for what they did to your heart, then you’re allowing them to hurt you a second time in your mind.” -Shannon L. Alder

32. “I can bear any pain as long as it has meaning.” -Haruki Murakami

34. “The pain of parting is nothing to the joy of meeting again.” -Charles Dickens

35. “Don’t be scared…Women can handle the worst kind of pain. You’ll find out one day.” -Gayle Forman 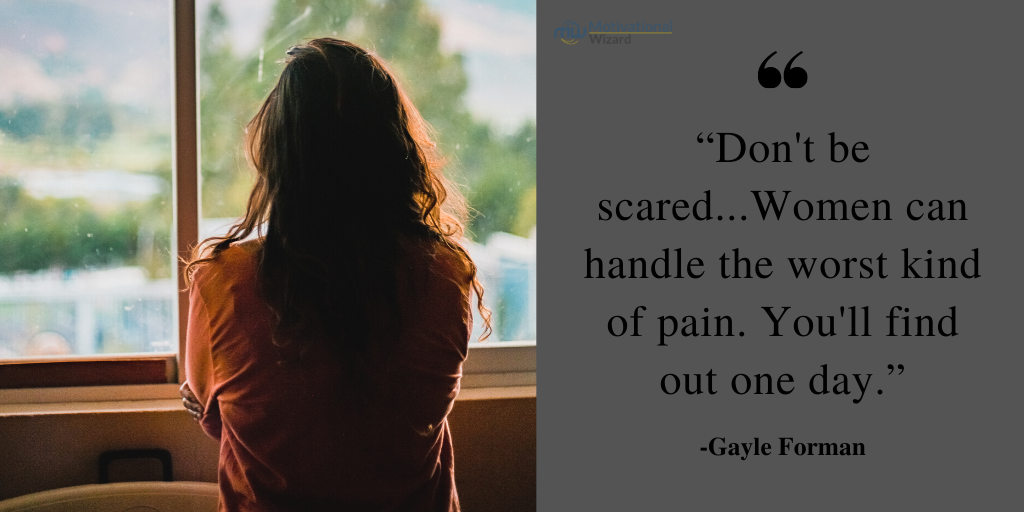 36. “There are ships sailing to many ports, but not a single one goes where life is not painful.” -Fernando Pessoa

37. “Anger, resentment and jealousy doesn’t change the heart of others it only changes yours.” -Shannon Alder

38. “Never hide things from hardcore thinkers. They get more aggravated, more provoked by confusion than the most painful truths.” -Criss Jami

39. “Most misunderstandings in the world could be avoided if people would simply take the time to ask, “What else could this mean?” -Shannon L. Alder

40.  “The unendurable is the beginning of the curve of joy.” -Djuna Barnes 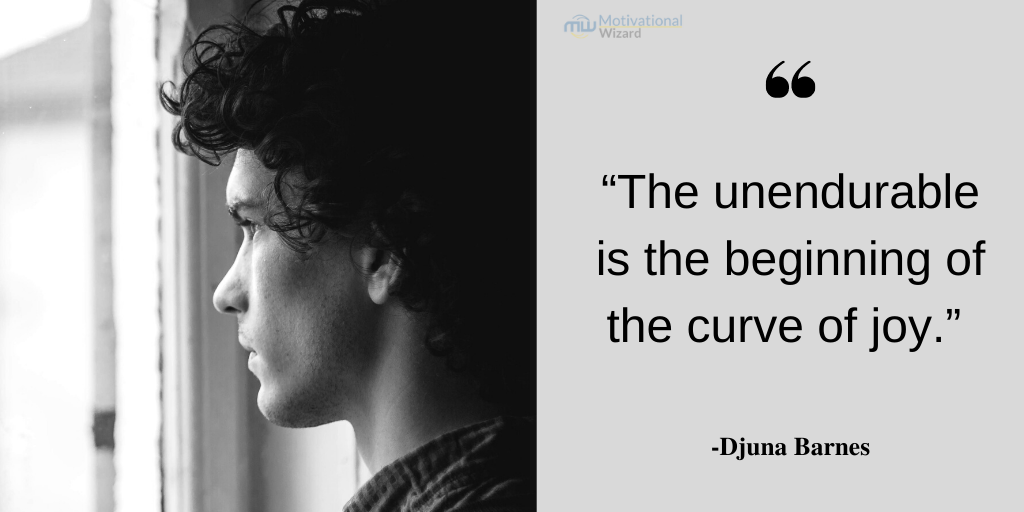 41. “Listen to God with a broken heart. He is not only the doctor who mends it, but also the father who wipes away the tears.” -Criss Jami

42. “There is a thin line that separates laughter and pain, comedy and tragedy, humor and hurt.” -Erma Bombeck

44. “He took his pain and turned it into something beautiful. Into something that people connect to. And that’s what good music does. It speaks to you. It changes you.” -Hannah Harrington

45. “If you are silent about your pain, they’ll kill you and say you enjoyed it.” -Zora Neale Hurston 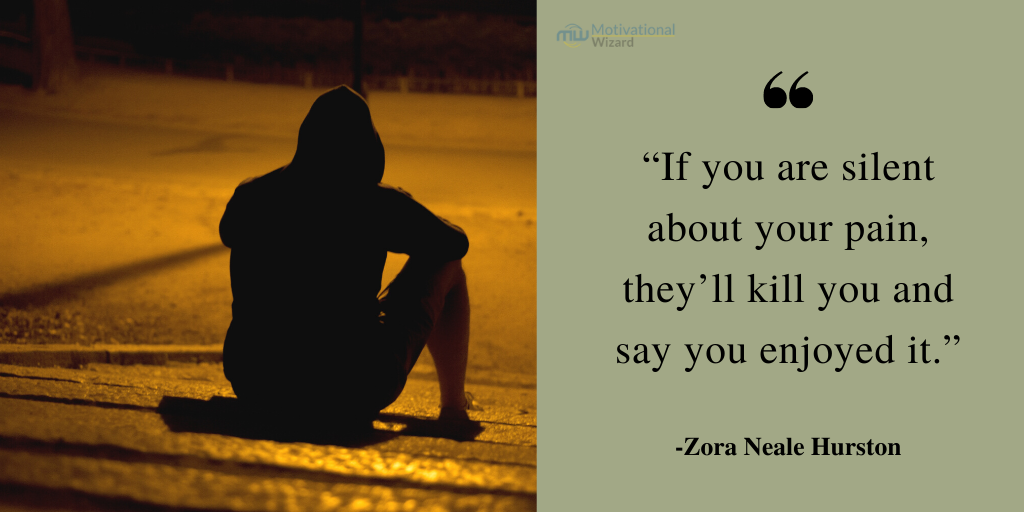 46. “Waiting hurts. Forgetting hurts. But not knowing which decision to take can sometimes be the most painful.” -José N. Harris

48. “I always hated when my scars started to fade, because as long as I could still see them, I knew why I was hurting.” -Jodi Picoult

49. “I could never hurt him enough to make his betrayal stop hurting. And it hurts, in every part of my body.” -Veronica Roth

50. “These pains you feel are messengers. Listen to them.” -Rumi 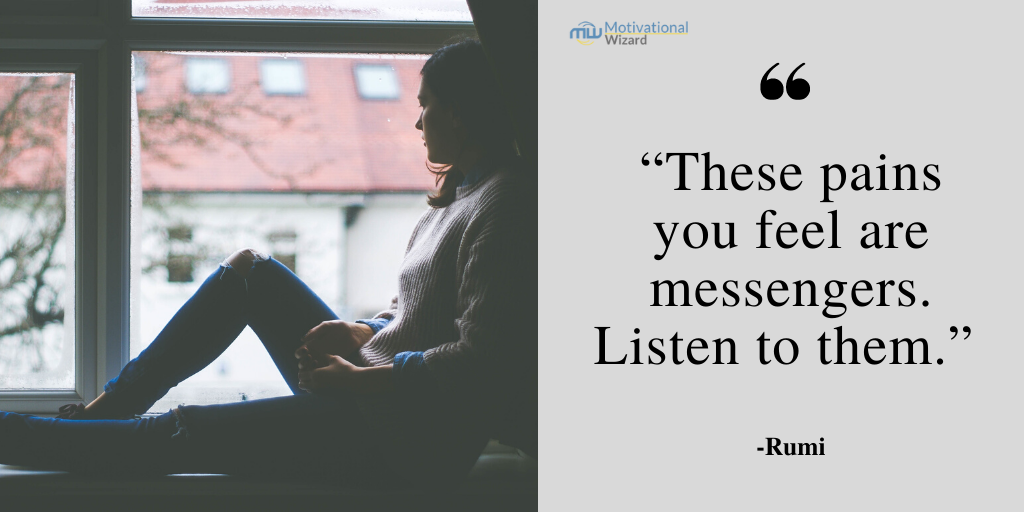 50 Mean Girls Quotes That Will Definately Make You Laugh

Discover Our Selection Of God Quotes To Strengthen Your Faith