1. “She would rather walk alone in darkness than follow anyone else’s shadow.” -R. G. Moon 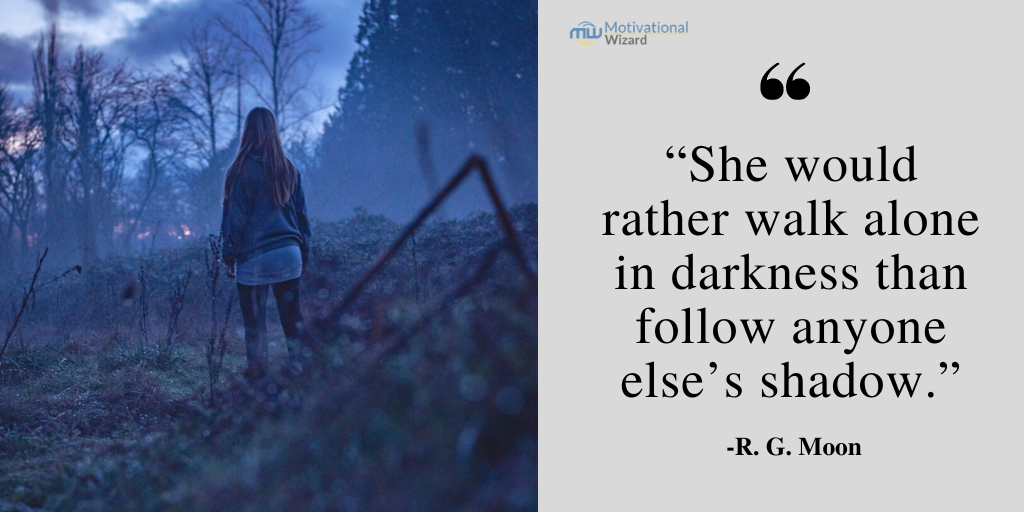 2. “She may be broken for a while, but that’s ok. She’s working on her, cause she’s not one to leave a mess lying around.” -JMSTORM

3. “She is a queen. Her soul is royalty.” -ADRIAN MICHAEL

5. “The most dangerous woman of all is the one who refuses to rely on your sword to save her because she carries her own.” -R. H. SIN 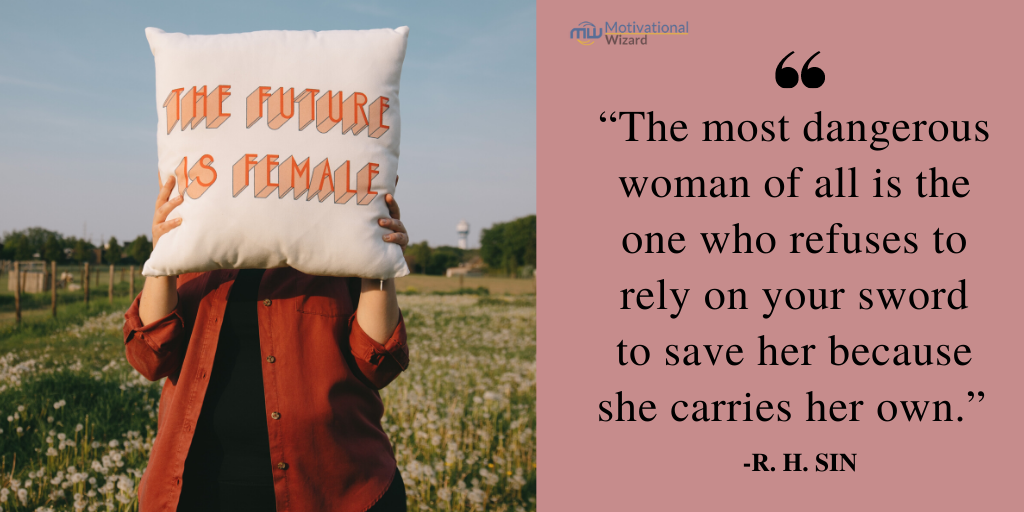 6. “What made her strong was despite the million things that hurt her, she spoke of nothing. Nothing but happiness.” -J. A.

9. “She overcame everything that was meant to destroy her.” -SYLVESTER MCNUTT III

10. “Her damaged petals are what made her more beautiful than all the other flowers.” -A. J. LAWLESS 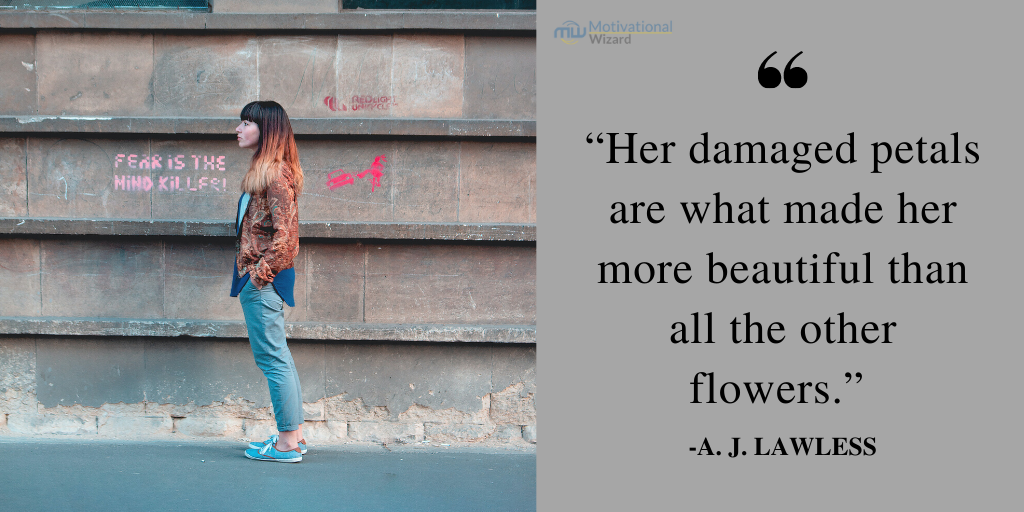 Read these Michelle Obama quotes that will inspire you

12. “She is a beautiful piece of broken pottery, put back together by her own hands. And a critical world judges her cracks while missing the beauty of how she made herself whole again.” -JMSTORM

13. “She is kind but strong, and that is where so many mistake her. They interpret her kindness for weakness and force her to show her strength.” -JMSTORM

15. “She is full of wounds riddled with scars, but she is still standing and she is still beautiful.” -R. H. SIN 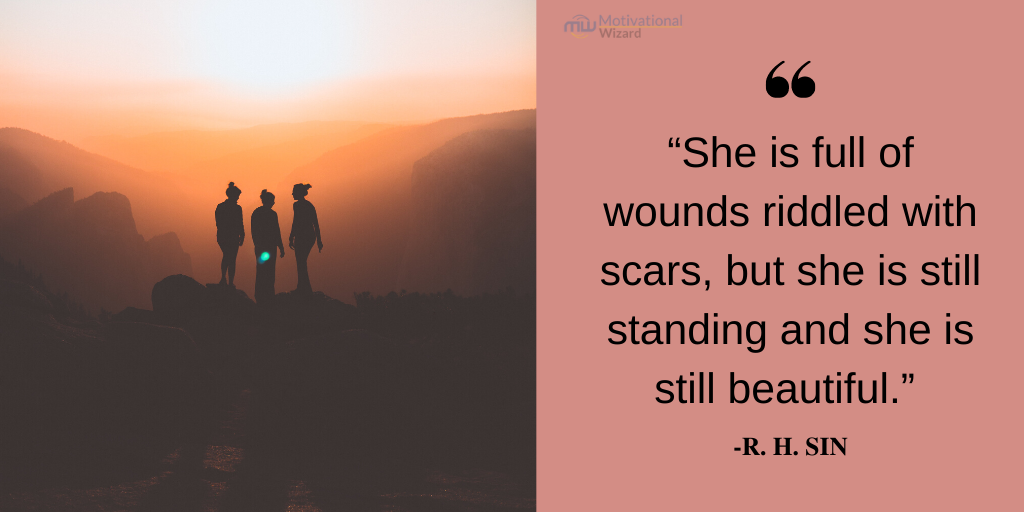 16. “And one day she discovered that she was fierce, and strong, and full of fire, and that not even she could hold herself back because her passion burned brighter than her fears.” -MARK ANTHONY

17. “The world needs strong women. Women who will lift and build others, who will love and be loved. Women who live bravely, both tender and fierce. Women of indomitable will.” -AMY TENNEY

18. “Give a woman pain and she’ll turn it into power. Give that woman chaos and she’ll create peace.” -R. H. SIN

19. “Do not tame the wolf inside you just because you’ve met someone who doesn’t have the courage to handle you.” -BELLE ESTRELLER 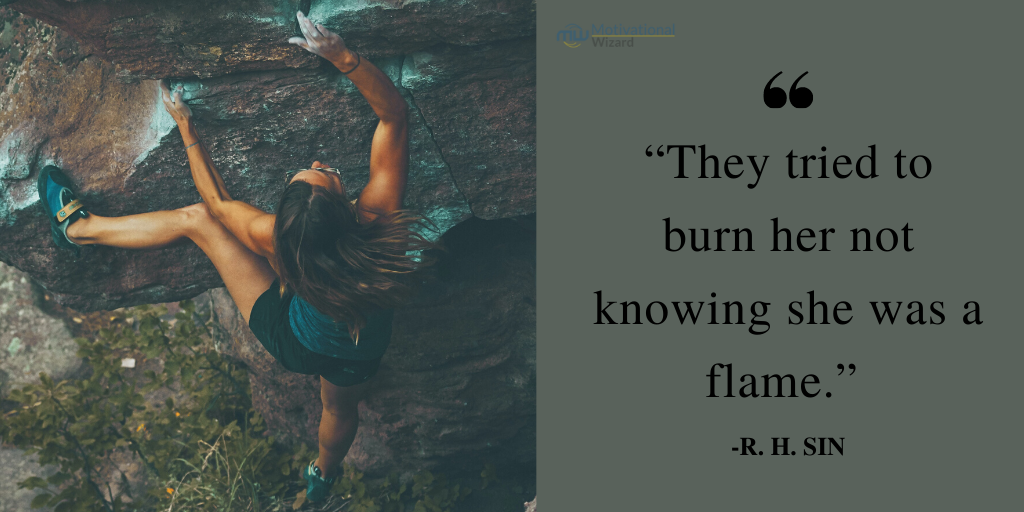 21. “And you, you scare people because you are whole all by yourself.” -LAUREN ALEX HOOPER

24. “There’s fire in her… If loved correctly, she will warm your entire home. If abused, she will burn it down.” -ANONYMOUS 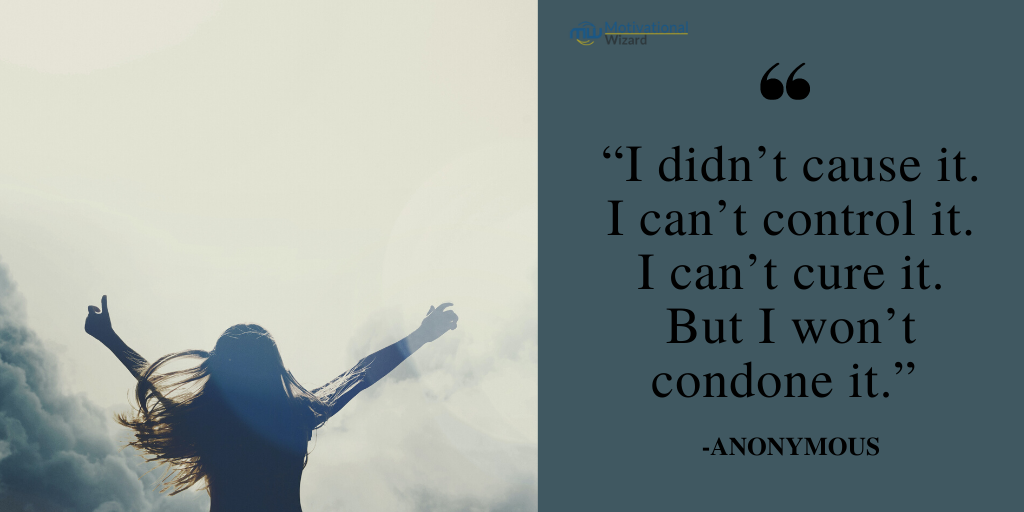 26. “You have to fight through some bad days to earn the best days of your life.” -ANONYMOUS

29. “A storm was coming, but that’s not what she felt. It was adventure on the wind and it shivered down her spine.” -ATTICUS

30. “She is water. Soft enough to offer life, tough enough to drown it away.” -RUPI KAUR

31. “A strong woman will automatically stop trying if she feels unwanted. She won’t fix it or beg, she’ll just walk away.” -ANONYMOUS

32. “Sometimes the smallest step in the right direction ends up being the biggest step of your life.” -ANONYMOUS

33. “If you ever find yourself in the wrong story, leave.” -MO WILLEMS

35. “Work hard at being the BEST version of yourself.” -ISADORA DUNCAN 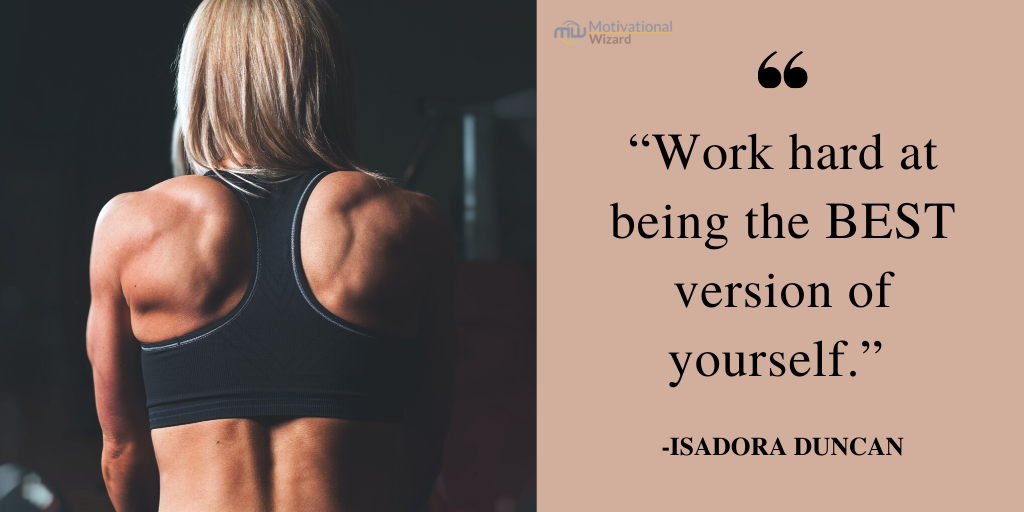 36. “Yes! You are stronger than you think.” -HEATHER A. STILLUFSEN

37. “Rainy days are good for the soul.” -ANONYMOUS

38. “Don’t let a little stormy weather get you down, there is always sunshine on the other side.” -HEATHER A. STILLUFSEN

39. “You must know this, there is always something out there that you can keep fighting for. So don’t give up.” -HEATHER A. STILLUFSEN 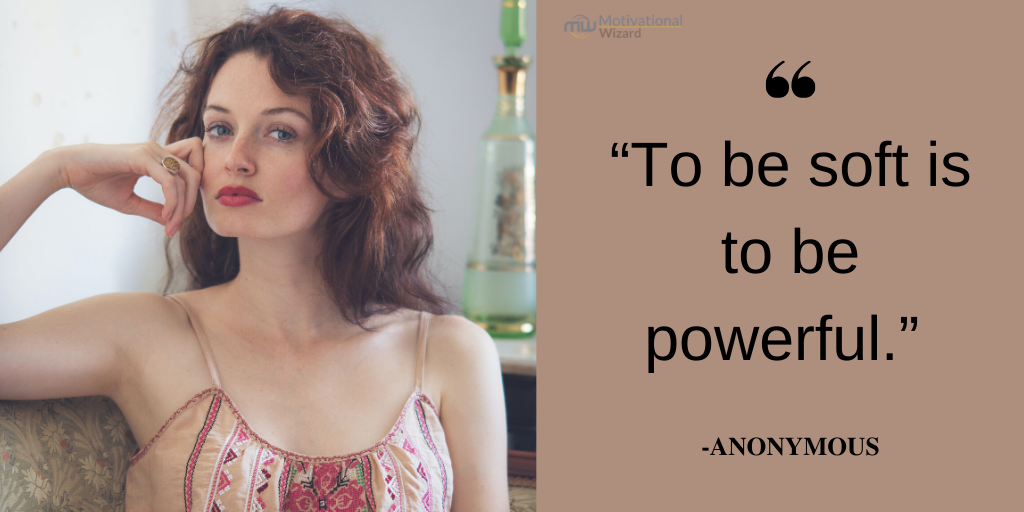 41. “Our backs tell stories no books have the spine to carry.” -RUPI KAUR

43. “We are made of all those who have built and broken us.” -ATTICUS

44. “She wasn’t born herself. She found herself over a long and treacherous road. And the more treacherous the road became, the more of herself she found.” -ATTICUS

45. “The bravest thing she ever did was to stay alive each day.” -ATTICUS 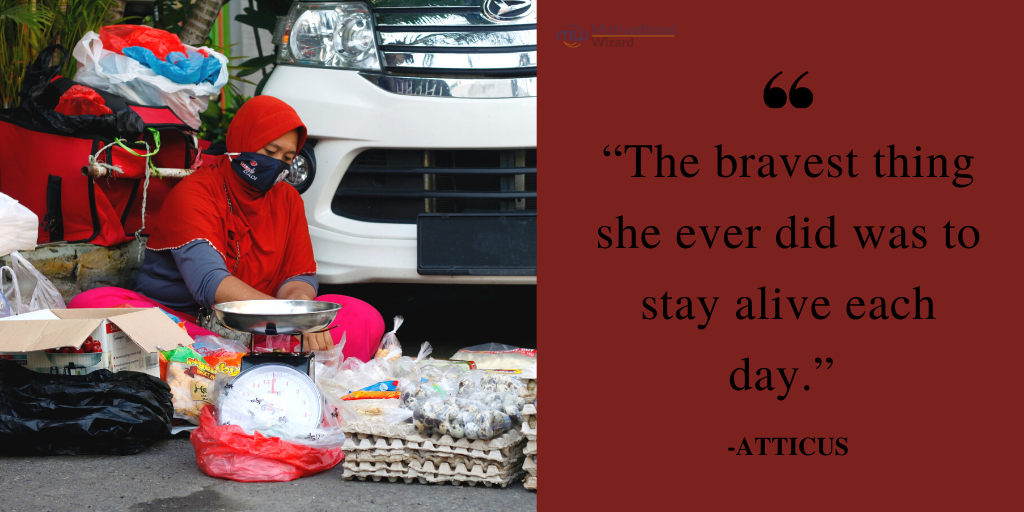 46. “You may not be everything you thought you’d be by now, but you can be the one who loves, serves, and gives her all, and waters and nurtures every plant in the garden that God has already given her.” -MORGAN HARPER NICHOLS

47. “Be strong enough to stand alone, smart enough to know when you need help, and brave enough to ask for it.” -ANONYMOUS

48. “Never ever mistake her silence for weakness. Remember that sometimes the air stills, before the onset of a hurricane.” -NIKITA HILL

49. “Chin up, child. In my experience, when a life seems to be falling to pieces, it is usually falling into place.” -BEAU TAPLIN

50. “Beautiful girl, you were made to do hard things so believe in yourself.” -ANONYMOUS 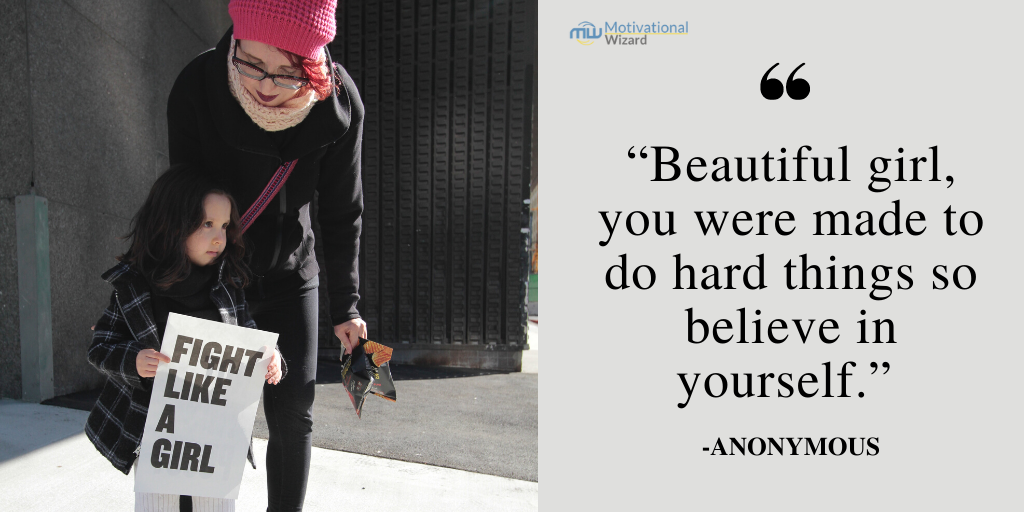 51. “A strong woman knows she has strength enough for the journey, but a woman of strength knows it is in the journey where she will become strong.” -ANONYMOUS

54. “A woman without a man is like a fish without a bicycle.” -GLORIA STEINEM

55. “She was a wild one; always stomping on eggshells that everyone else tip-toed on.” -Kaitlin Foster 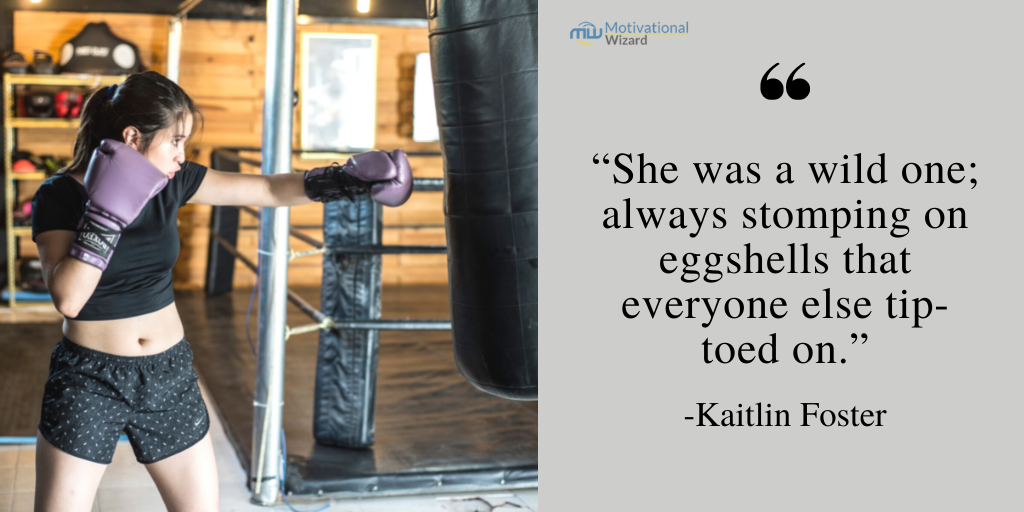 56. “Life is tough, my darling, but so are you.”  -Stephanie Bennett-Henry

57. “Women are like tea bags. You never know how strong they are until they are in hot water.” -Eleanor Roosevelt

58. “If you live for people’s acceptance, you’ll die from their rejections.” -Lecrae

59. “Strong women don’t have ‘attitudes’, we have standards.” -Marilyn Monroe

60. “The woman who doesn’t require validation from anyone is the most feared individual on the planet.” -Mohadesa Najumi 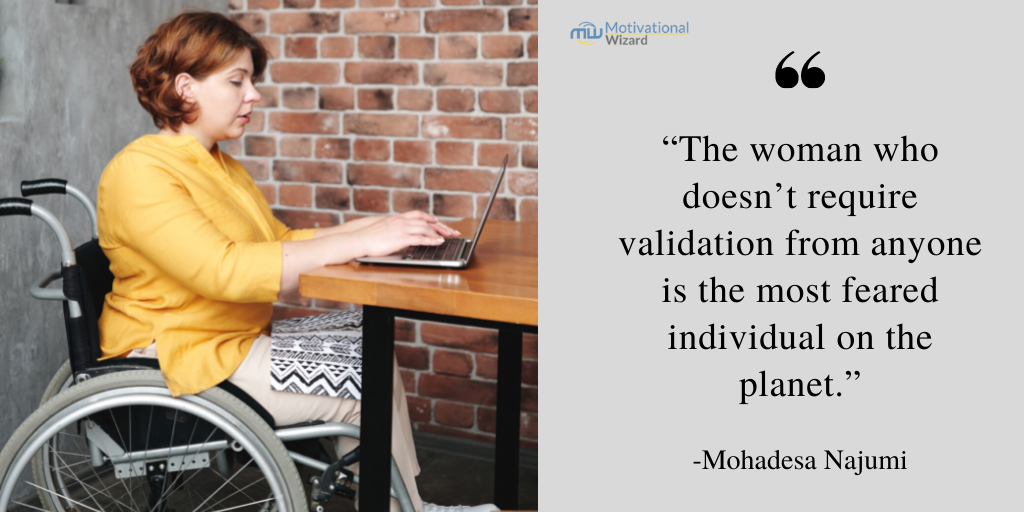 61. “A strong woman loves, forgives, walks away, lets go, tries again, and perseveres … no matter what life throws at her.” -ANONYMOUS

62. “I keep my ideals, because in spite of everything I still believe that people are really good at heart.” -Anne Frank

64. “You can say a lot of things about me, but you cannot say I don’t work hard.” -Kim Kardashian

65. “I am a woman with thoughts and questions and sh*t to say. I say if I’m beautiful. I say if I’m strong. You will not determine my story — I will.” -Amy Schumer 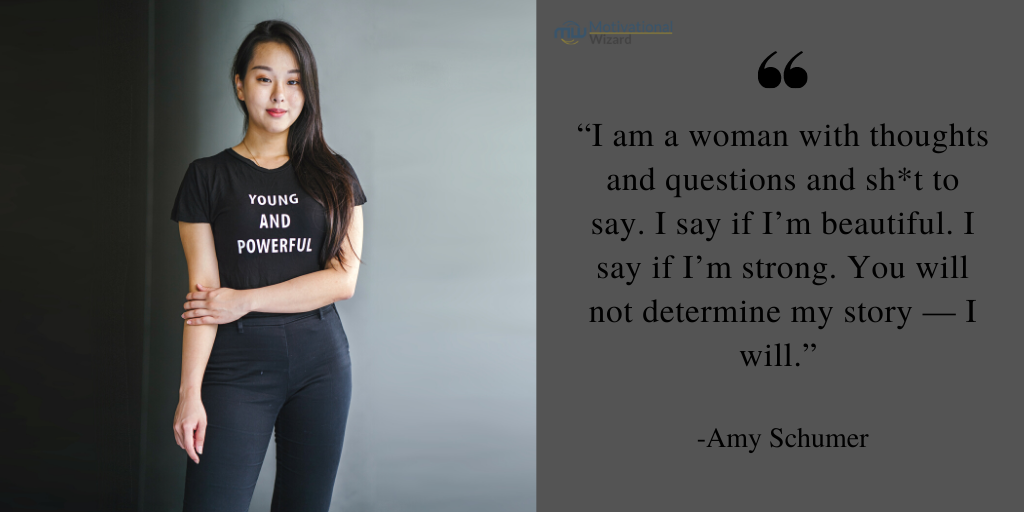 67. “She’s a strong cup of black coffee in a world that is drunk on the cheap wine of shallow love” -Jm Storm

70. “Woman is the dominant sex. Men have to do all sorts of stuff to prove they are worthy of a woman’s attention.” -Camille Pagla 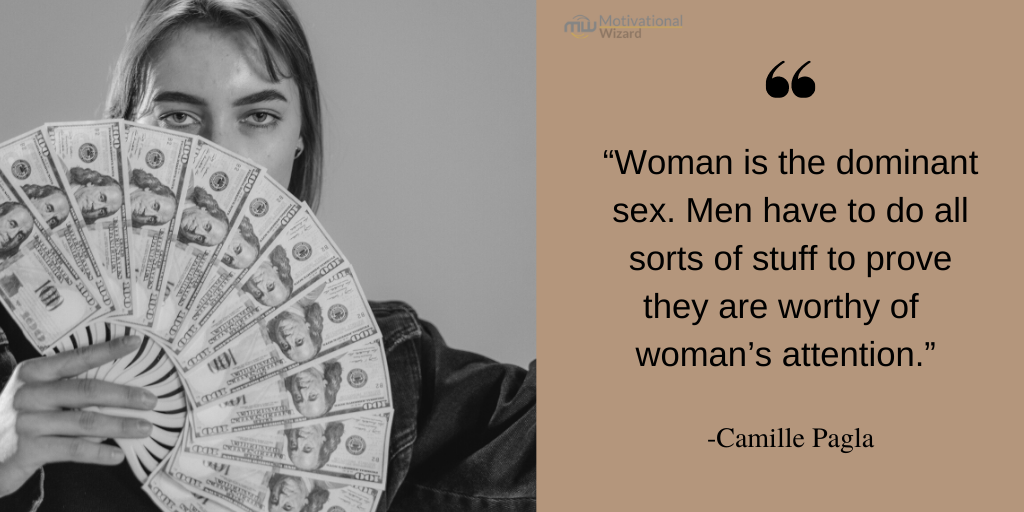 71. She is water. Strong enough to drown you, soft enough to cleanse you, and deep enough to save you.” -Rupi Kaur

72. “Girls should never be afraid to be smart.” -Emma Watson

74. “As for my girls, I’ll raise them to think they breathe fire.” -Jessica Kirkland

75. “We are made of all those who have built and broken us.” -Atticus 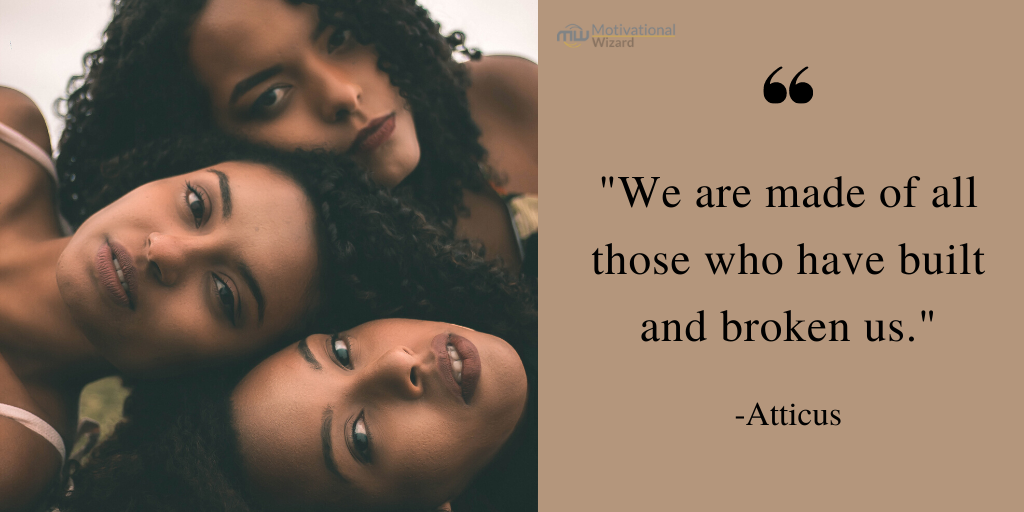