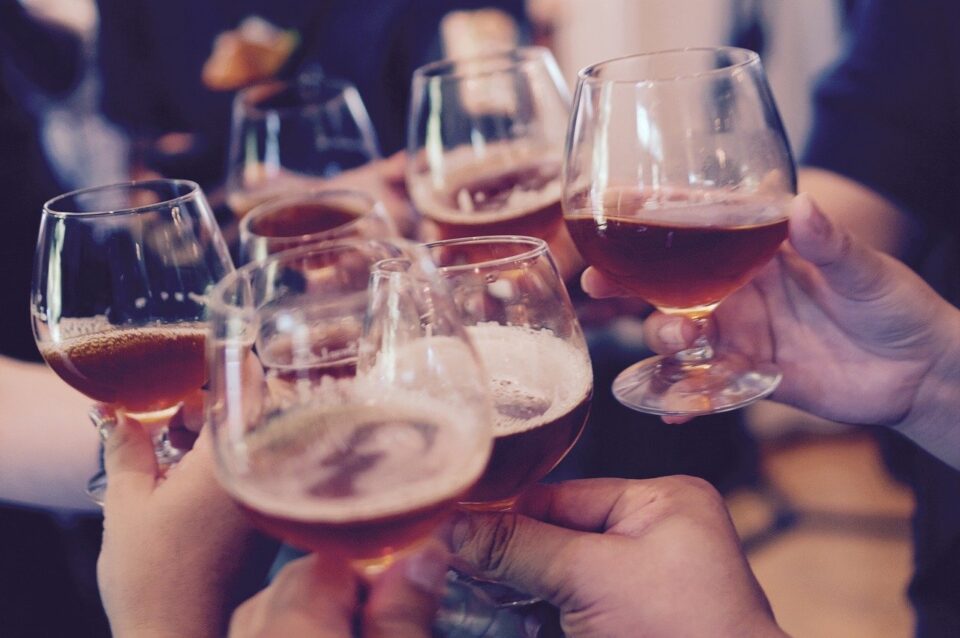 Drinking alcohol signifies celebration, enjoyment and relief. It unites people to have fun and live up life’s happiest moments to the fullest.

Sometimes we all need a little break from our hectic schedules to have fun with our friends, colleagues or relatives. If you like groovy parties with some drinks, we have a great collection of some brilliant alcohol quotes that you can use while partying.

Drinking alcohol brings out our crazy side which leads to louder laughter and absolute entertainment. However, do not forget to drink responsibly and have a ball in moderation. Whenever you have plans to drink with your friends, share these drinking alcohol quotes with them to set the bar high for the party.

1. The first thing in the human personality that dissolves in alcohol is dignity.-unknown

2. O God, that men should put an enemy in their mouths to steal away their brains! that we should, with joy, pleasance, revel, and applause, transform ourselves into beasts!-William Shakespeare

4. Alcohol impairs calcium absorption by affecting the liver’s ability to activate vitamin D. Vitamin D is important in the metabolism of calcium. The more alcohol you drink, the more you hinder your body’s ability to build up and maintain healthy bones.-Harvey & Marilyn Diamond

5. There is this to be said in favor of drinking, that it takes the drunkard first out of society, then out of the world.-Ralph Waldo Emerson

6. Drunkenness is nothing but voluntary madness.-Seneca The Younger

7. Reality is an illusion created by a lack of alcohol.-N.F. Simpson

8. When you stop drinking, you have to deal with this marvelous personality that started you drinking in the first place.-Jimmy Breslin

9. It’s like gambling somehow. You go out for a night of drinking and you don’t know where you’re going to end up the next day. It could work out good or it could be disastrous. It’s like the throw of the dice.-Jim Morrison

10. Fill up the goblet and reach to me some! Drinking makes wise, but dry fasting makes glum.-William R. Alger

11. No substance in nature, as far as yet known, has, when it reaches the brain, such power to induce mental and moral changes of a disastrous character as alcohol. Its transforming power is marvelous, and often appalling. It seems to open a way of entrance into the soul for all classes of foolish, insane or malignant spirits, who, so long as it remains in contact with the brain, are able to hold possession.-Timothy Shay Arthur

12. The sway of alcohol over mankind is unquestionably due to its power to stimulate the mystical faculties of human nature.-William James

14. Drinking is an emotional thing. It joggles you out of everyday life, out of everything being the same. It yanks you out of your body and your mind and throws you against the wall. I have the feeling that drinking is a form of suicide where you’re allowed to return to life and begin all over the next day. It’s like killing yourself, and then you’re reborn. I guess I’ve lived about ten or fifteen thousand lives now.-Charles Bukowski

15. I would not put a thief in my mouth to steal my brains.-William Shakespeare

17. It is sad that people need alcohol to make them happy.-Habeeb Akande

18. To a drinker the sensation is real and pure and akin to something spiritual: you seek; in the bottle, you find.-Caroline Knapp

19. Drunkenness is temporary suicide: the happiness that it brings is merely negative, a momentary cessation of unhappiness.-Bertrand Russell

20. Alcohol is the anaesthesia by which we endure the operation of life.-George Bernard Shaw

21. Then trust me, there’s nothing like drinking, So pleasant this side of the grave; It keeps the unhappy from thinking, And makes e’en the valiant more brave.-Charles Dibdin

22. I have taken more out of alcohol than alcohol has taken out of me.-Winston Churchill

23. Herb is the healing of a nation, alcohol is the destruction.-Bob Marley

25. Alcohol doesn’t console, it doesn’t fill up anyone’s psychological gaps, all it replaces is the lack of God. It doesn’t comfort man. On the contrary, it encourages him in his folly, it transports him to the supreme regions where he is master of his own destiny.-Marguerite Duras

26. Alcohol is barren. The words a man speaks in the night of drunkenness fade like the darkness itself at the coming of day.-Marguerite Duras

27. Alcohol is necessary for a man so that he can have a good opinion of himself, undisturbed be the facts.-Finley Peter Dunne

28. Wine makes a man better pleased with himself; I do not say that it makes him more pleasing to others.-Samuel Johnson

29. There is a devil in every berry of the grape.-The Koran

30. Wine sets even a thoughtful man to singing, or sets him into softly laughing, sets him to dancing. Sometimes it tosses out a word that was better unspoken.-Homer

You may say I’m a dreamer, but I’m not the only one. I hope someday you’ll join us and the world will live as one

30 Haters Quotes That Will Motivate You