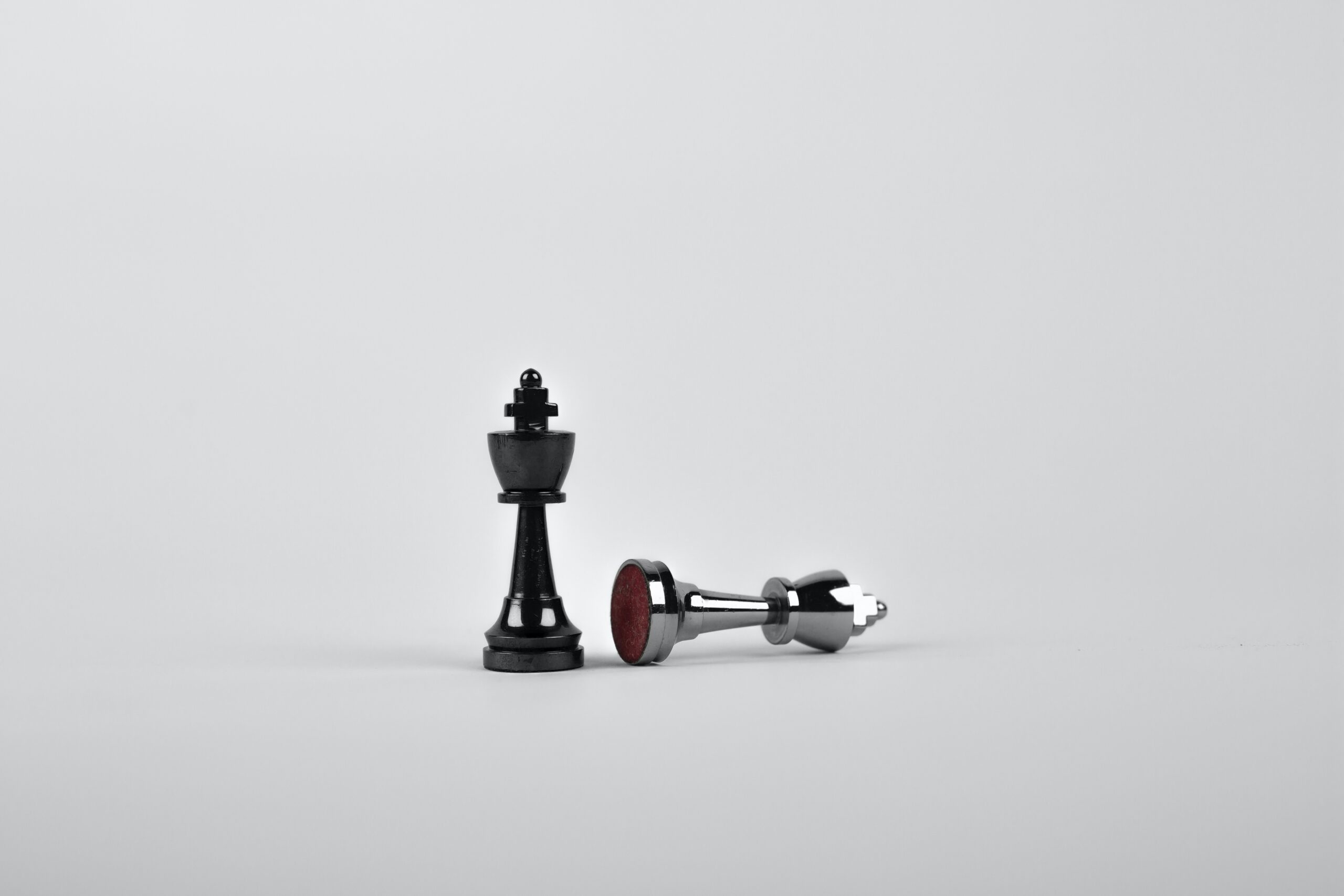 Sacrifice is a complicated phenomenon of offering material possessions or the lives of animals or humans to divinity in the form of worship. It is evident that the ritual of animal sacrifice has been practiced for a very long time.

The term Sacrifice suggests,” “doing without something” or “giving something up”. However, metaphorically it means doing good for others or taking little loss against gaining great powers, similar to the game of chess.

1. “Great achievement is usually born of great sacrifice, and is never the result of selfishness.” -Napoleon Hill 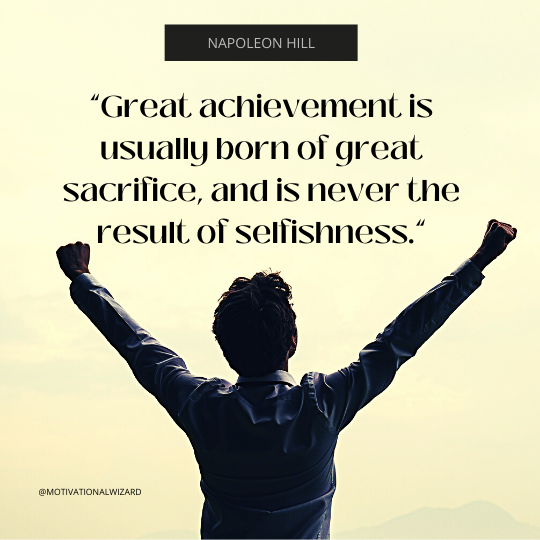 2. “You will come to know that what appears today to be a sacrifice will prove instead to be the greatest investment that you will ever make.” -Gordon B. Hinckley

3. “Success is no accident. It is hard work, perseverance, learning, studying, sacrifice and most of all, love of what you are doing or learning to do.” -Pele

4. “Follow your passion, be prepared to work hard and sacrifice, and, above all, don’t let anyone limit your dreams.” -Donovan Bailey

5. “True love is selfless. It is prepared to sacrifice.” -Sadhu Vaswani

6. “Let us sacrifice our today so that our children can have a better tomorrow.” -A. P. J. Abdul Kalam

7. “You can’t achieve anything in life without a small amount of sacrifice.” -Shakira

8. “Teamwork requires some sacrifice upfront; people who work as a team have to put the collective needs of the group ahead of their individual interests.” -Patrick Lencioni

10. “You have to fight to reach your dream. You have to sacrifice and work hard for it.” -Lionel Messi 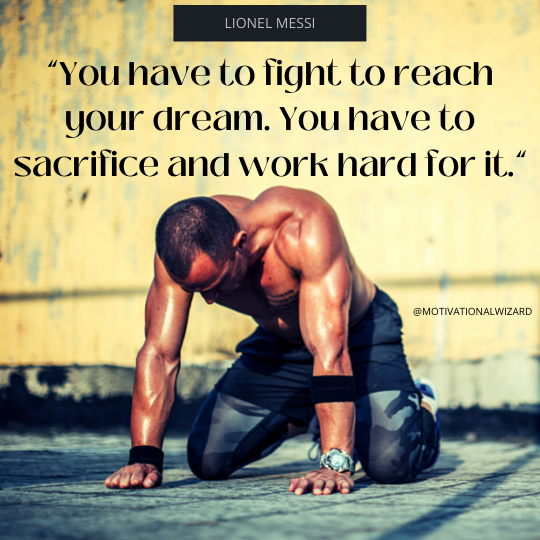 11. “The important thing is this: to be able, at any moment, to sacrifice what we are for what we could become.” -Maharishi Mahesh Yogi

13. “To give anything less than your best is to sacrifice the gift.” -Steve Prefontaine

14. “Sustainability can’t be like some sort of a moral sacrifice or political dilemma or a philanthropical cause. It has to be a design challenge.” -Bjarke Ingels

15. “We don’t have to sacrifice a strong economy for a healthy environment.” -Dennis Weaver

16. “When bad men combine, the good must associate; else they will fall one by one, an unpitied sacrifice in a contemptible struggle.” -Edmund Burke

18. “For me, no ideological or political conviction would justify the sacrifice of a human life. For me, the value of life is absolute, with no concessions. It’s not negotiable.” -Edgar Ramirez

19. “One life is all we have and we live it as we believe in living it. But to sacrifice what you are and to live without belief, that is a fate more terrible than dying.” -Joan of Arc

20. “A team will always appreciate a great individual if he’s willing to sacrifice for the group.” -Kareem Abdul-Jabbar 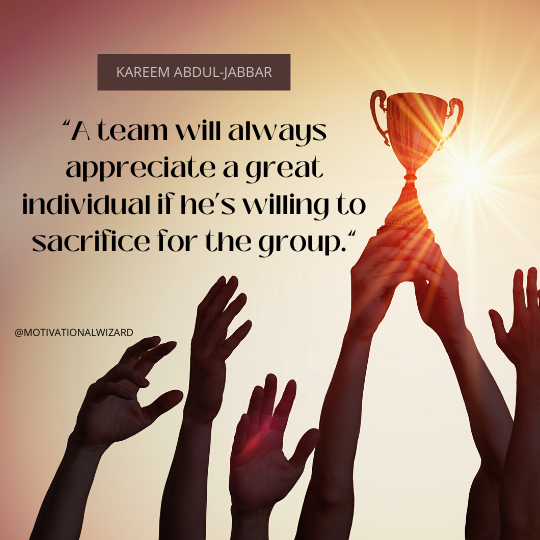 21. “The journey has definitely not been easy, but all the sacrifice has paid off very well in terms of my performance on-court.” -Rohan Bopanna

22. “The willingness of America’s veterans to sacrifice for our country has earned them our lasting gratitude.” -Jeff Miller

23. “Dreams do come true, if we only wish hard enough, You can have anything in life if you will sacrifice everything else for it.” -James M. Barrie

24. “Brotherhood means laying down your life for somebody, really willing to sacrifice yourself for somebody else.” -Tim Hetherington

25. “There is no moral authority like that of sacrifice.” -Nadine Gordimer

26. “Too long a sacrifice can make a stone of the heart. O when may it suffice?” -William Butler Yeats

27. “The idea of redemption is always good news, even if it means sacrifice or some difficult times.” -Patti Smith

28. “There is no decision that we can make that doesn’t come with some sort of balance or sacrifice.” -Simon Sinek 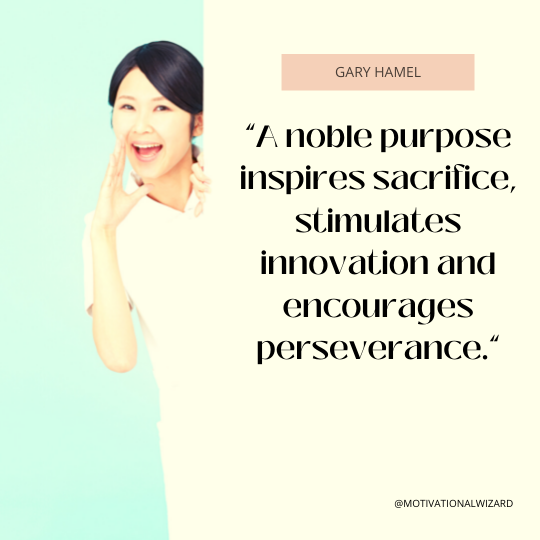 32. “I am a member of a team, and I rely on the team, I defer to it and sacrifice for it, because the team, not the individual, is the ultimate champion.” -Mia Hamm

33. “We all naturally want to become successful… we also want to take shortcuts. And it’s easy to do so, but you can never take away the effort of hard work and discipline and sacrifice.” -Apolo Ohno

34. “In the military, they give medals for people who are willing to sacrifice themselves so that others may survive. In business, we give bonuses to people who sacrifice others.” -Simon Sinek

35. “You aren’t going to find anybody that’s going to be successful without making a sacrifice and without perseverance.” -Lou Holtz

36. “Life is only a long and bitter suicide, and faith alone can transform this suicide into a sacrifice.” -Franz Liszt

37. “At the end of the day, we all want to win, so everybody has to sacrifice when you want to be a part of something special.” -Jayson Tatum

39. “Every wish, every dream, every idea comes to existence only through blood, sweat and sacrifice.” -Ivan Moody

40. “I think that the good and the great are only separated by the willingness to sacrifice.” -Kareem Abdul-Jabbar 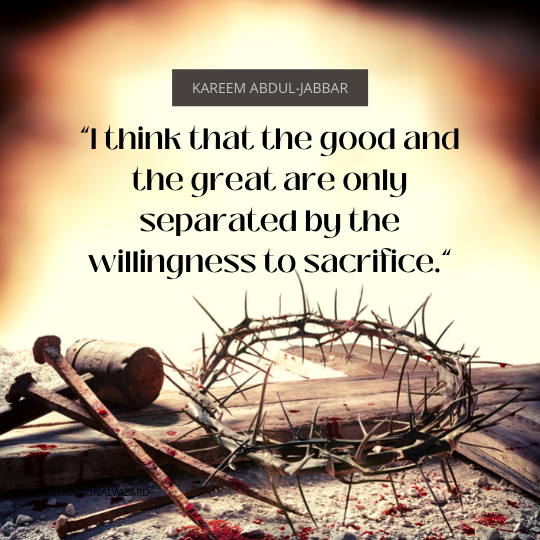 41. “Love is not a feeling of happiness. Love is a willingness to sacrifice.” -Michael Novak

42. “Sometimes when you sacrifice something precious, you’re not really losing it. You’re just passing it on to someone else.” -Mitch Albom

43. “There are memories that time does not erase… Forever does not make loss forgettable, only bearable.” -Cassandra Clare

44. “Sacrifice is a part of life. It’s supposed to be. It’s not something to regret. It’s something to aspire to.” -Mitch Albom

45. “Life is funny. Things change, people change, but you will always be you, so stay true to yourself and never sacrifice who you are for anyone.” -Zayn Malik

46. “Sometimes the prize is not worth the costs. The means by which we achieve victory are as important as the victory itself.” -Brandon Sanderson

47. “Real magic can never be made by offering someone else’s liver. You must tear out your own, and not expect to get it back.” -Peter S. Beagle

48. “Love without sacrifice is like theft.” -Nassim Nicholas Taleb

49. “There is no progress or accomplishment without sacrifice.” -Idowu Koyenikan 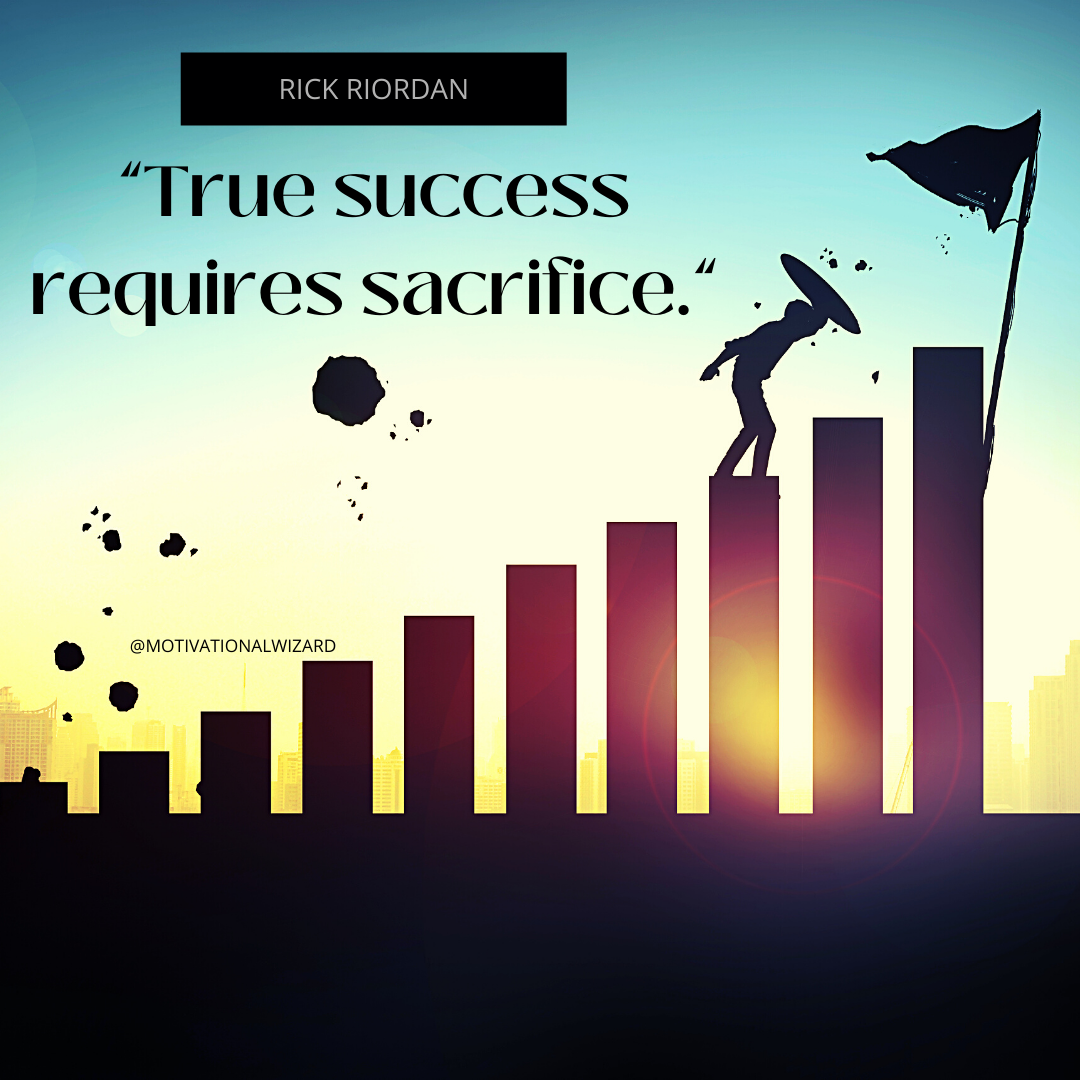 51. “What are you doing this weekend to improve your financial situation? Sacrifice made today goes a long way for a better tomorrow.” -Robert T. Kiyosaki

52. “You sacrifice the few to save the many.” -Joel Osteen

53. “Never let someone’s opinion become your reality. Never sacrifice who you are because someone else has a problem with it. Love who you are inside and out.” -Les Brown

55. “To be able, at any moment, to sacrifice what you are, for what you will become.” -Eric Thomas

56. “Sacrifice today for tomorrows betterment, you are willing to pay those payments with pain, because pain is just a message when you are fixing something that’s insufficient in your life.” -Greg Plitt

57. “Success takes an investment in time, dedication, and sacrifice. This is true education. It is a process.” -Robert T. Kiyosaki

58. “There can be no progress, no achievement without sacrifice.” -James Allen

59. “The greatest things in life all require commitment, sacrifice, some struggle and hardship. It’s not easy. But absolutely worth it.” -Robin S. Sharma 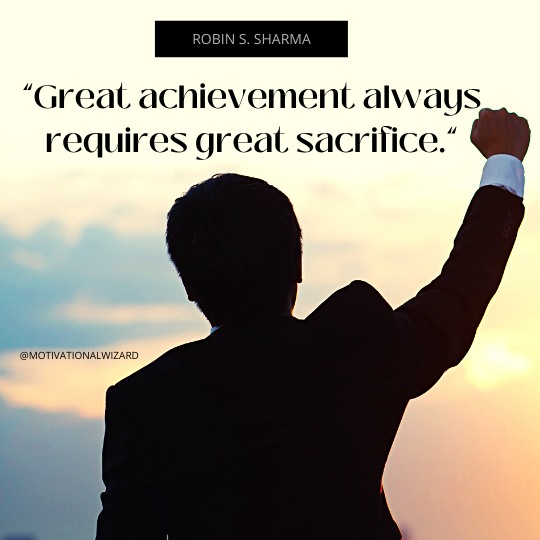 35 Greatest Cristiano Ronaldo Quotes That Will Awaken Your Inner Passion

“I Have An Adventure Every Morning.” — Brad Pitt