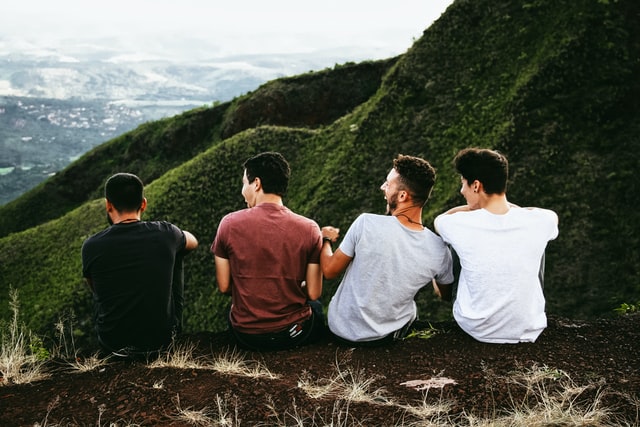 We all have to face struggles in our life. As the famous adage goes that life is not a bed of roses. Sometimes the going gets rather challenging, and at that time, we need someone to guide us out. Here we present to you Motivational quotes for men to go through when this happens.

These quotes would help you sort your life out. You can clear your mind and become much more positive in your approach. Have a look at these quotes and transform your life drastically.

How Do You Encourage A Man With Words?

1. “Stick to the basics. Do your job. Avoid stupidity. Speak for yourself. Be attentive to details. Put results ahead of being right. Go to bed smarter than when you woke up.” – Shane Parrish

2. “To be a man requires that you accept everything life has to give you, beginning with your name.” – Burl Ives

3. “The good man is the man who, no matter how morally unworthy he has been, is moving to become better.” – John Dewey

4. “If you perform the sacrifice of doing your duty, you do not have to do anything else. Devoted to duty, man attains perfection.” – Bhagavad Gita

5. “A wise man becomes free when he is ready to die at any moment.”- Diogenes 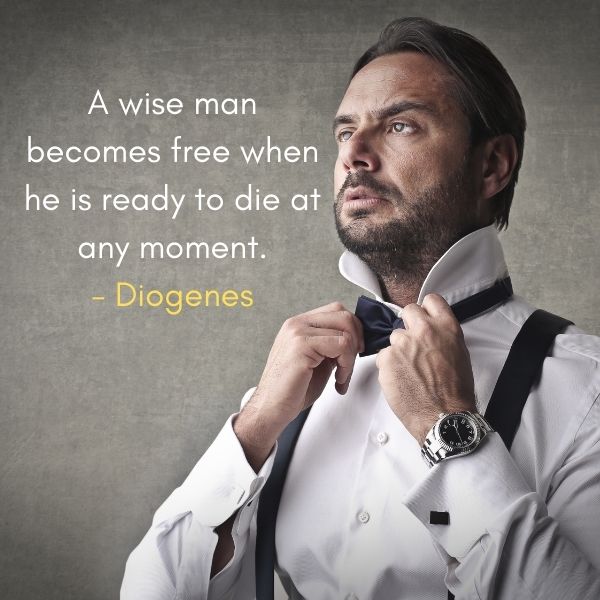 6. “It is not what he has, or even what he does which expresses the worth of a man, but what he is.” – Henri-Frederic Amiel

7. “The true measure of a man is how he treats someone who can do him absolutely no good.” – Samuel Johnson

8. “The difference between the impossible and the possible lies in a man’s determination.” – Tommy Lasorda

9. “Life is too short to be little. Man is never so manly as when he feels deeply, acts boldly, and expresses himself with frankness and with fervor.” – Benjamin Disraeli

10. “My idea of the modern stoic sage is someone who transforms fear into prudence, pain into information, mistakes into initiation, and desire into undertaking.” – Nassim Nicholas Taleb

11. “The first step to being a good man is this: You must deeply feel the burden of the stones some else [is] carrying.” – Mehmet Murat ildan

14. “Courage is not having the strength to go on; it is going on when you don’t have the strength.” – Theodore Roosevelt

15. “A man may conquer a million men in battle but one who conquers himself is, indeed, the greatest of conquerors.” – Buddha

16. “A good man’s prayers will from the deepest dungeon climb heaven’s height, and bring a blessing down.” – Joanna Baillie

17. “It takes a mighty good man to be better than no man at all.” – Dixie Carter

18. “You have to have a bunch of dimensions of yourself. You have to be able to adapt in this world. You can’t be a nice guy living in a world of savages.” – Mike Tyson

19. “But man is not made for defeat. A man can be destroyed but not defeated.” – Ernest Hemingway

20. “If there is anything that a man can do well, I say let him do it. Give him a chance.” – Abraham Lincoln

21. “You cannot dream yourself into a character; you must hammer and forge yourself one.” – James Froude

22. “Nothing deters a good man from doing what is honorable.” – Seneca the Younger

24. “I have believed the best of every man. And find that to believe is enough to make a bad man show him at his best, or even a good man swings his lantern higher.”- William Butler Yeats

25. “Real men don’t dance to other people’s tune, instead, they play for others to dance.”– Michael Bassey Johnson

What Are Some Words Of Wisdom For Men?

26. “Man is a genius when he is dreaming.”- Akira Kurosawa 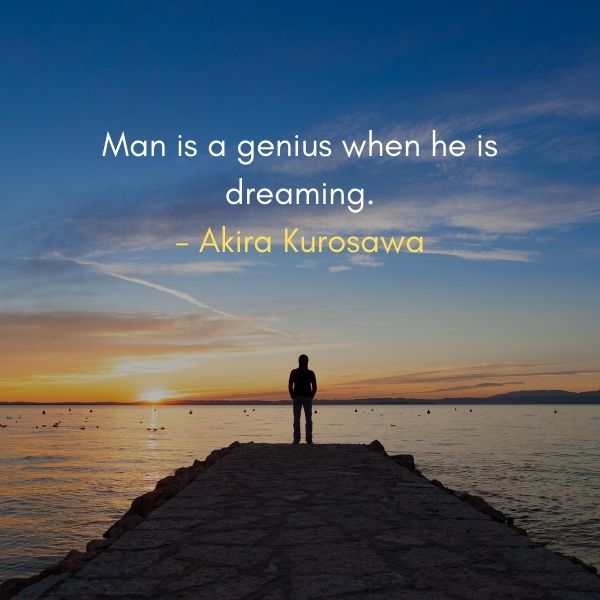 29. “It is his nature, not his standing, that makes the good man.” – Publilius Syrus

30. “If unwilling to rise in the morning, say to thyself, ‘I awake to do the work of a man.’” – Marcus Aurelius

32. “The true measure of a man is how he treats someone who can do him absolutely no good.” – Samuel Jackson

33. “A man does what he must – in spite of personal consequences, in spite of obstacles and dangers and pressures – and that is the basis of all human morality.” – John F. Kennedy

35. “Good men are not those who now and then do a good act, but men who join one good act to another.”- Henry Ward Beecher

37. “Keep away from people who try to belittle your ambitions. Small people always do that, but the really great make you feel that you, too, can become great.”- Mark Twain

39. “If a man can reduce his needs to zero, he is truly free: there is nothing that can be taken from him and nothing anyone can do to hurt him…And he or she can also be still.”– John Boyd

40. “The good man is the friend of all living things.” – Mahatma Gandhi

42. “Just remember, there are no quick fixes. But, by taking action just a little bit every day, you will build up a powerful reservoir of confidence, self-esteem, and discipline.” – Scott Allan

44. “He who Serves his fellows is, of all his fellows, greatest.” – E. Urner Goodman

45. “Keep away from people who try to belittle your ambitions. Small people always do that, but the really great make you feel that you, too, can become great.” –Mark Twain

How Can I Be A Good Man Quotes?

46. “A good man will want you to shine. He wants you to be your amazing self. A good man loves to show off his happy, intelligent, amazing, powerful woman.” – Anastasia Netri

47. “Do not pray for an easy life. Pray for the strength to endure a difficult one.” – Bruce Lee

49. “If one advances confidently in the direction of one’s dreams, and endeavors to live the life which one has imagined, one will meet with a success unexpected in common hours.” – Henry David Thoreau

50. “Experience is that marvelous thing that enables you to recognize a mistake when you make it again.” – Franklin Jones

51. “A successful man is one who can lay a firm foundation with the bricks others have thrown at him.” – David Brinkley 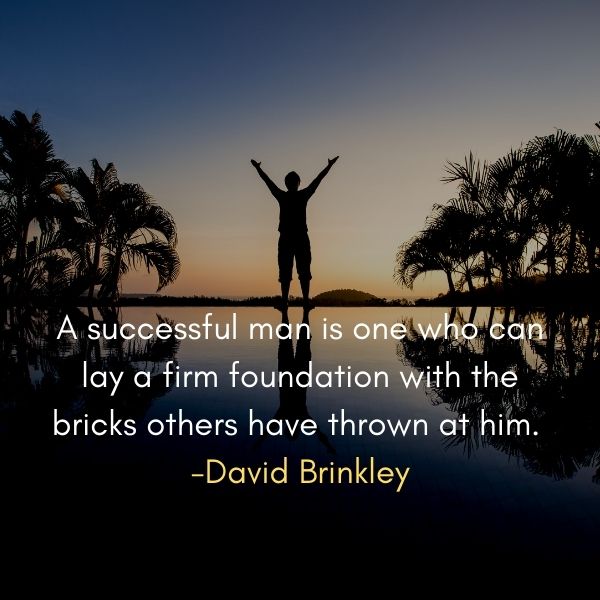 52. “Big jobs usually go to the men who prove their ability to outgrow small ones.”- Theodore Roosevelt

53. “Good men have the fewest fears. He has but one great fear who fears to do wrong; he has a thousand who has overcome it.” – Christian Nestell Bovee

54. “The journey of a thousand miles begins with one step.”- Lao Tzu

55. “Being a good husband is like being a good stand-up comic: you need ten years before you can even call yourself a beginner.” – Jerry Seinfeld

56. “Good men who exercise power are really the most fascinating of all people.” – John Keegan

57. “It takes a great man to be a good listener.” – Calvin Coolidge

58. “If a man does not keep pace with his companions, perhaps it is because he hears a different drummer. Let him step to the music which he hears however measured or far away.” – Henry David Thoreau

60. “Live your life in such a way that you neither hide nor have a wish to display your life to people.”- Leo Tolstoy

How Do You Inspire A Man?

62. “Associate with men of good quality if you esteem your own reputation; for it is better to be alone than in bad company.” – George Washington

63. “The mark of a great man is one who knows when to set aside the important things in order to accomplish the vital ones.” – Brandon Sanderson

64. “The heart of a good man is the sanctuary of God in this world.” – Suzanne Curchod

65. “A good man would prefer to be defeated than to defeat injustice by evil means.” – Sallust

67. “Man is not made for defeat. A man can be destroyed, but not defeated.”- Ernest Hemingway 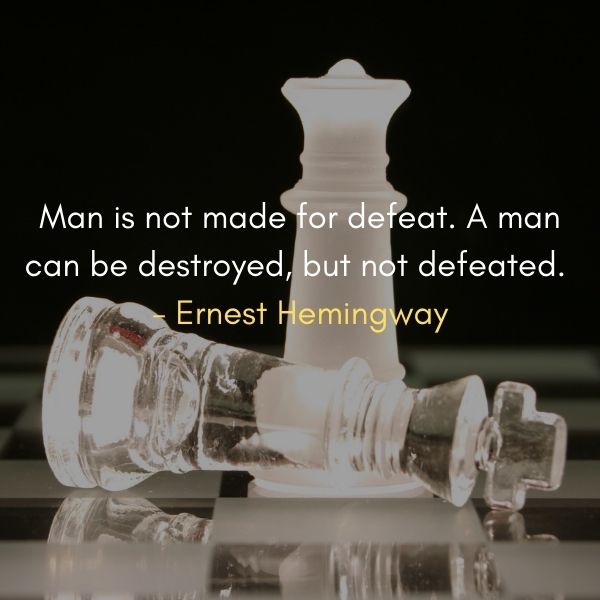 68. “Champions come and go, but to be legendary you got to have heart, more heart than the next man, more than anyone in the world.” – Muhammad Ali

69. “If a man’s mind becomes pure, his surroundings will also become pure.” – Buddha

How Can I Empower My Man?

71. “The first step to be a good man is this: You must deeply feel the burden of the stones some else carrying.” – Mehmet Murat ildan

74. “Waste no more time arguing about what a good man should be. Be one.” – Marcus Aurelius

75. “The greatest deception men suffer is from their own opinions” – Leonardo da Vinci

76. “Big jobs usually go to the men who prove their ability to outgrow small ones.” – Theodore Roosevelt

77. “A man who is a master of patience is master of everything else.” – George Savile

79. “The man who is deserving the name is the one whose thoughts and exertions are for others rather than for himself.” – Walter Scott

81. “Know you not that a good man does nothing for appearance sake, but for the sake of having done right?”- Epictetus

82. “Though in the order of nature angels rank above men, yet, by scale of justice, good men are of greater value than bad angels.” – Saint Augustine

83. “No great man ever complains of want of opportunity.” – Ralph Waldo Emerson

84. “To be disciplined or non-disciplined is a choice you make every minute in every hour of your life.” – Russell Gerald Johnston

85. “It is part of a good man to do great and noble deeds, though he risk everything.” – Plutarch