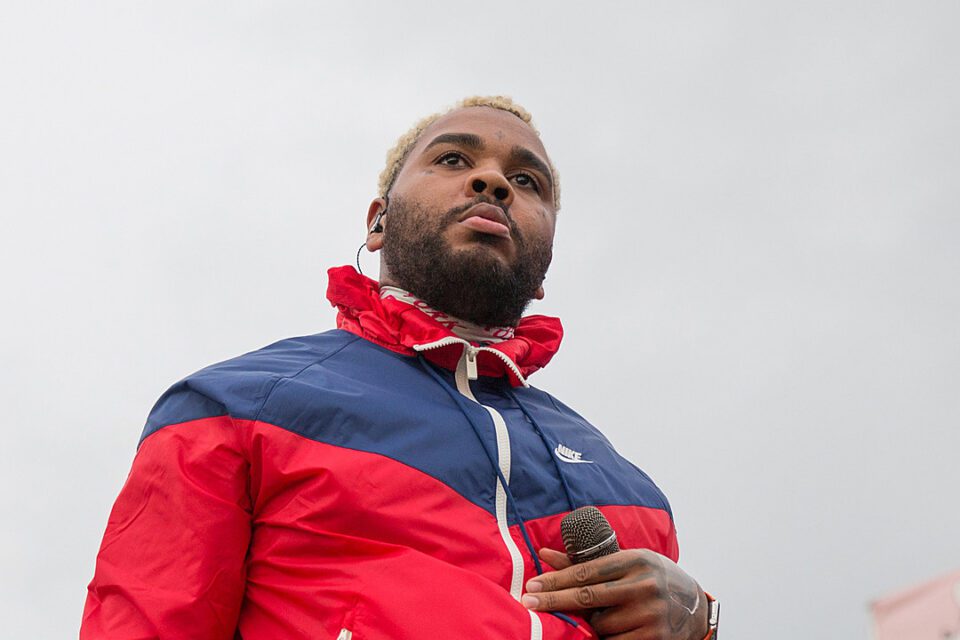 Kevin Jerome Gilyard (born February 5, 1986), better known by his stage name Kevin Gates, is an American rapper, singer, and entrepreneur. He is currently signed to Bread Winners’ Association with a partnership with Atlantic Records. Islah was his debut studio album, which was released in January 2016.

We’ve picked 30 best Kevin Gates quotes, where he talks about his journey, his struggle, success, love, failure, and of course his music.

1. Don’t get mad at me for being the best of what I was created to be.-Kevin Gates 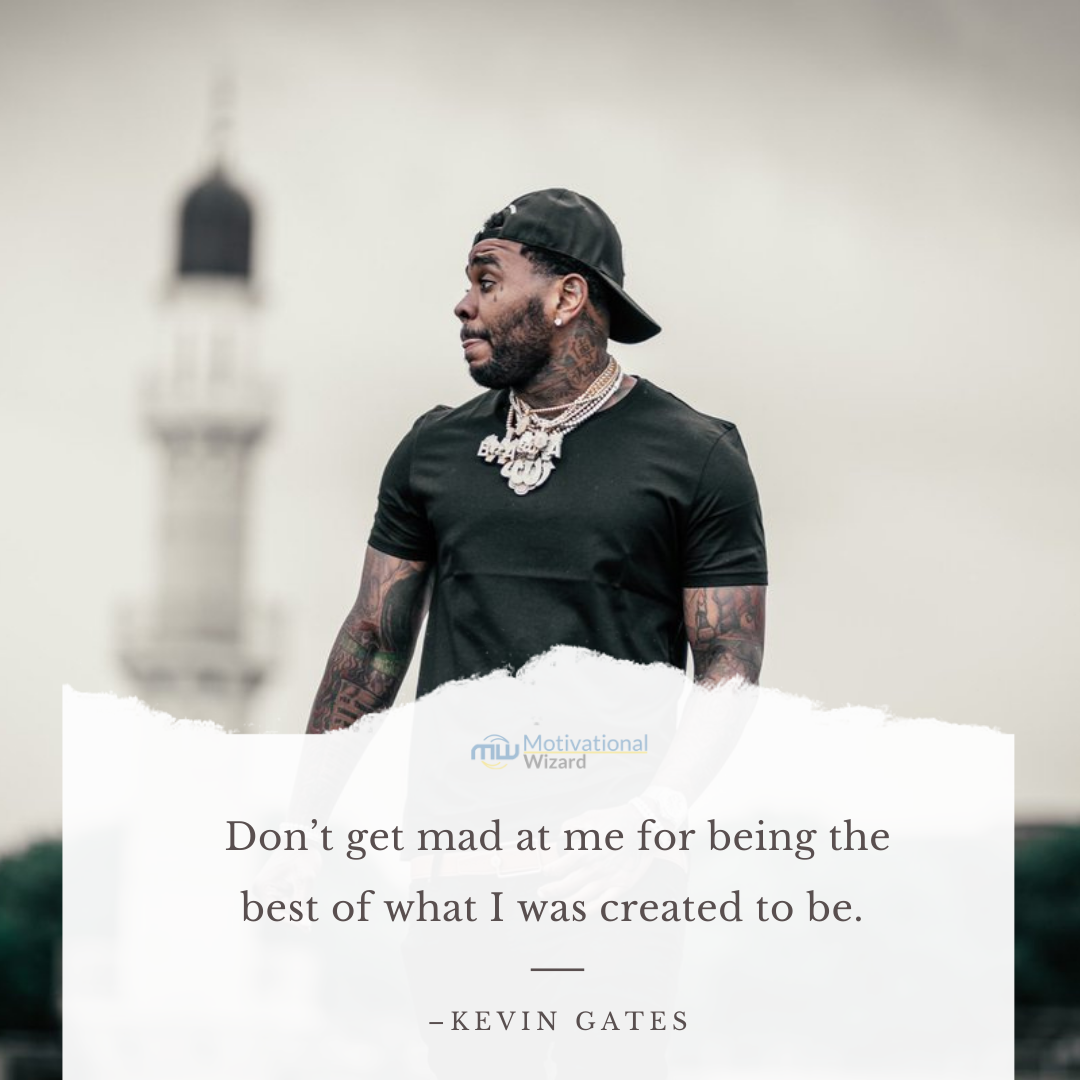 2. Never break or fold, that’s what it takes to be major.-Kevin Gates

3. If you associate yourself with peer pressure or complacency, you’re destined for failure.-Kevin Gates

5. You can’t make everybody else happy and still stay on top.-Kevin Gates 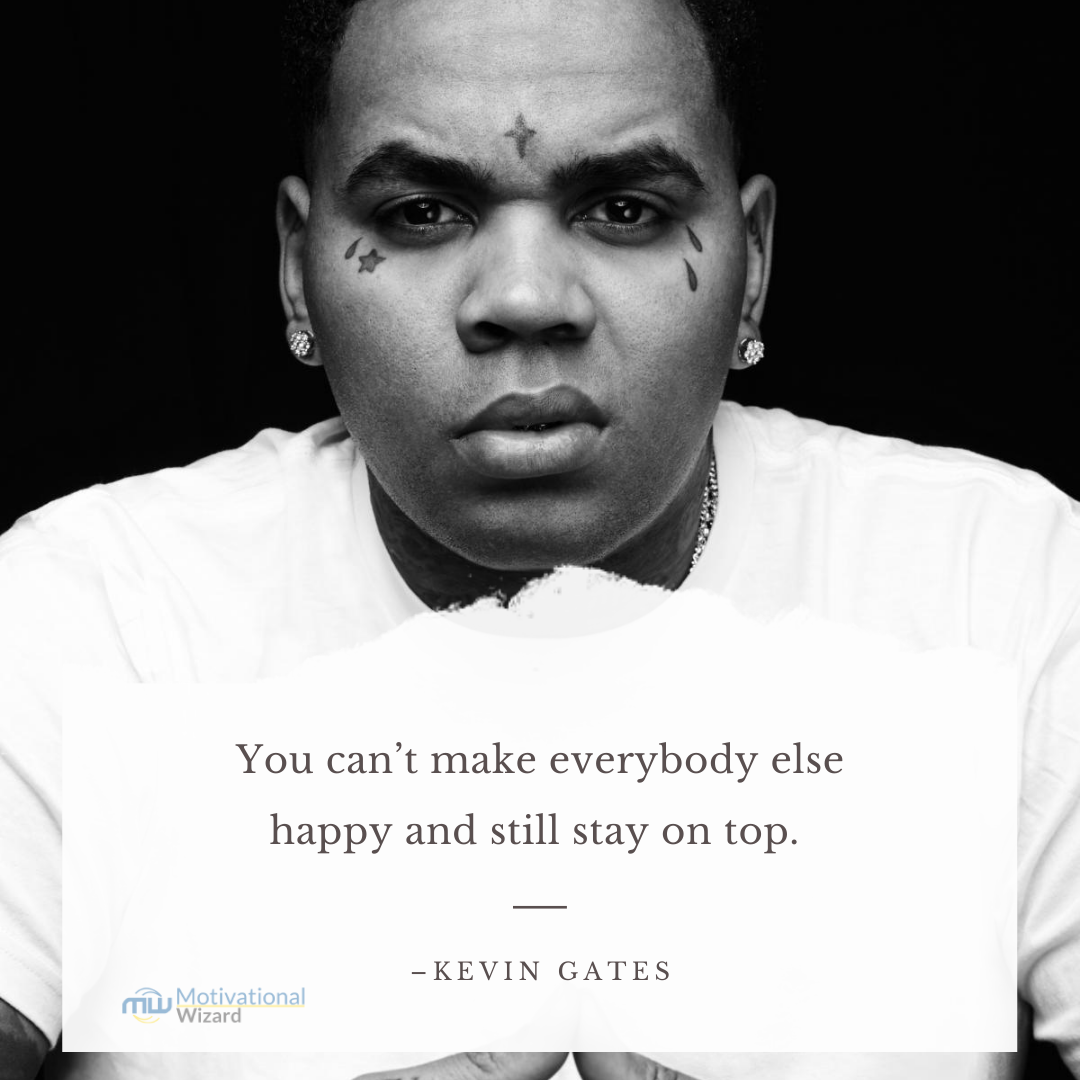 6. I’ve had mixtapes that have been better than albums I’ve heard from other artists. I take my time; I put my heart into it.-Kevin Gates

7. Why accept failure when success is free?-Kevin Gates

8. I suffer from deep depression, so my only release is music.-Kevin Gates

9. Rap was more of a release for me, a journal.-Kevin Gates

10. A hot producer might not make a hot beat for me. I just love music.-Kevin Gates 11. I love to make music, I love to get tattoos…That’s just what I love. If I wasn’t getting paid I’d still do it.-Kevin Gates

12. Without an understanding of bad…how can one truly have an appreciation of good.-Kevin Gates

13. Some may consider this a problem, I easily fall in love.-Kevin Gates 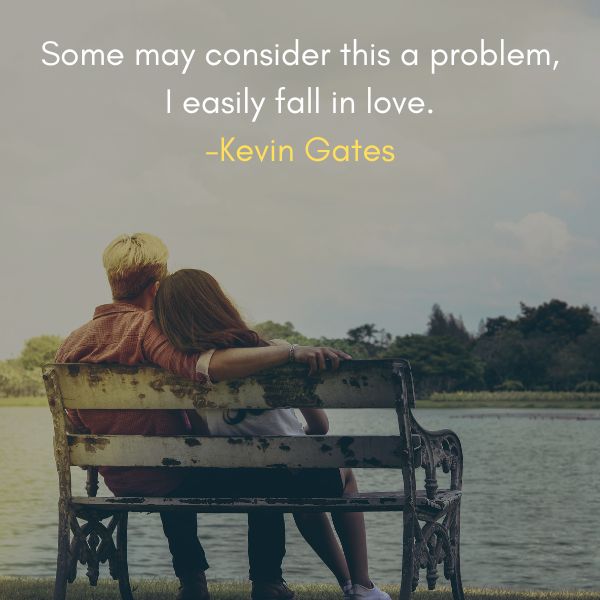 14. I love God, I love everybody else around me as myself, and I love my enemy.-Kevin Gates

15. To be honest I am not looking to be romantic, already got someone at home.-Kevin Gates 16. It is illegal to steal my feelings and leave.-Kevin Gates 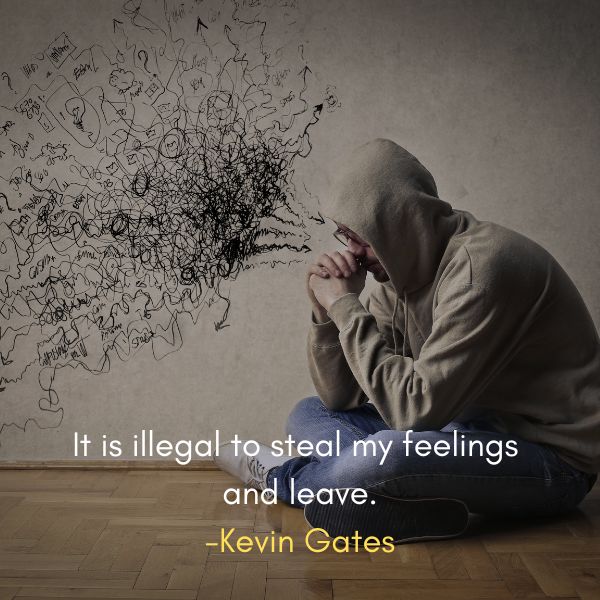 17. If it matters to you, pursue it aggressively.-Kevin Gates

19. I experience great hurt, this hurt allows me to know I’m alive.-Kevin Gates 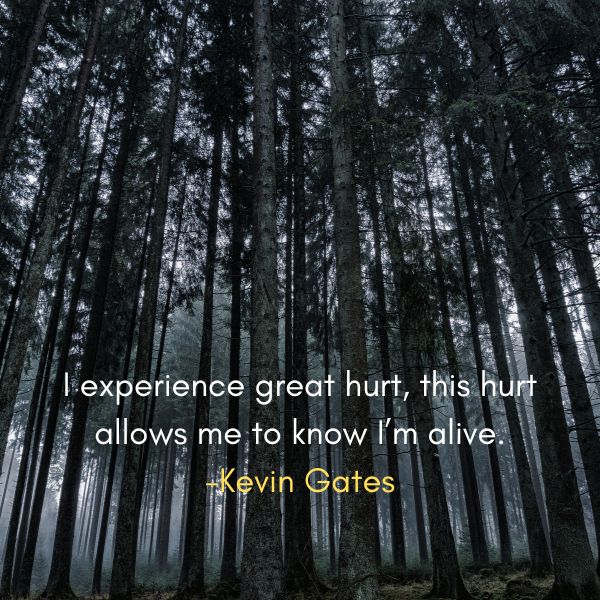 21. I’ve had good times and I’ve had bad times and I reminisce, maybe when I lay down, but throughout my day I keep myself engulfed in whatever moment I’m in because it could steer me into a depressed state.-Kevin Gates

22. The ones that hate you most tend to be the people you know.-Kevin Gates

23. I have trust issues with allowing other individuals to know my innermost secrets for fear of how I may be viewed. Everyone has this.-Kevin Gates

24. I believe that life is a journey and for me to tell you my plans; things never go according to plan.-Kevin Gates 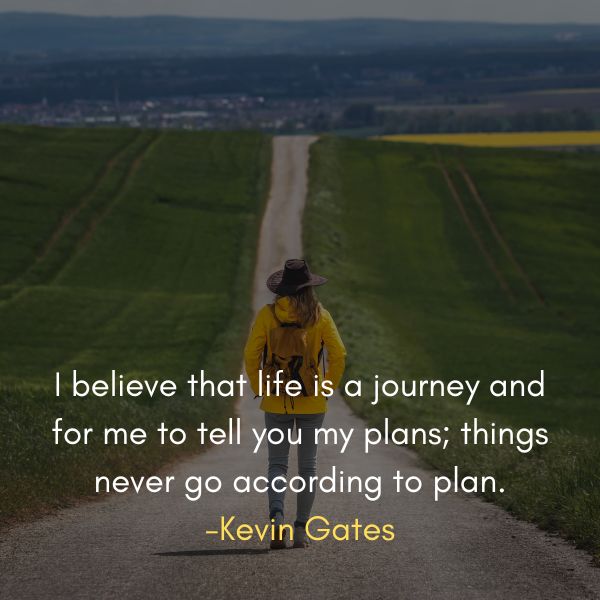 25. No matter what people say about me, her opinion is all that matters.-Kevin Gates 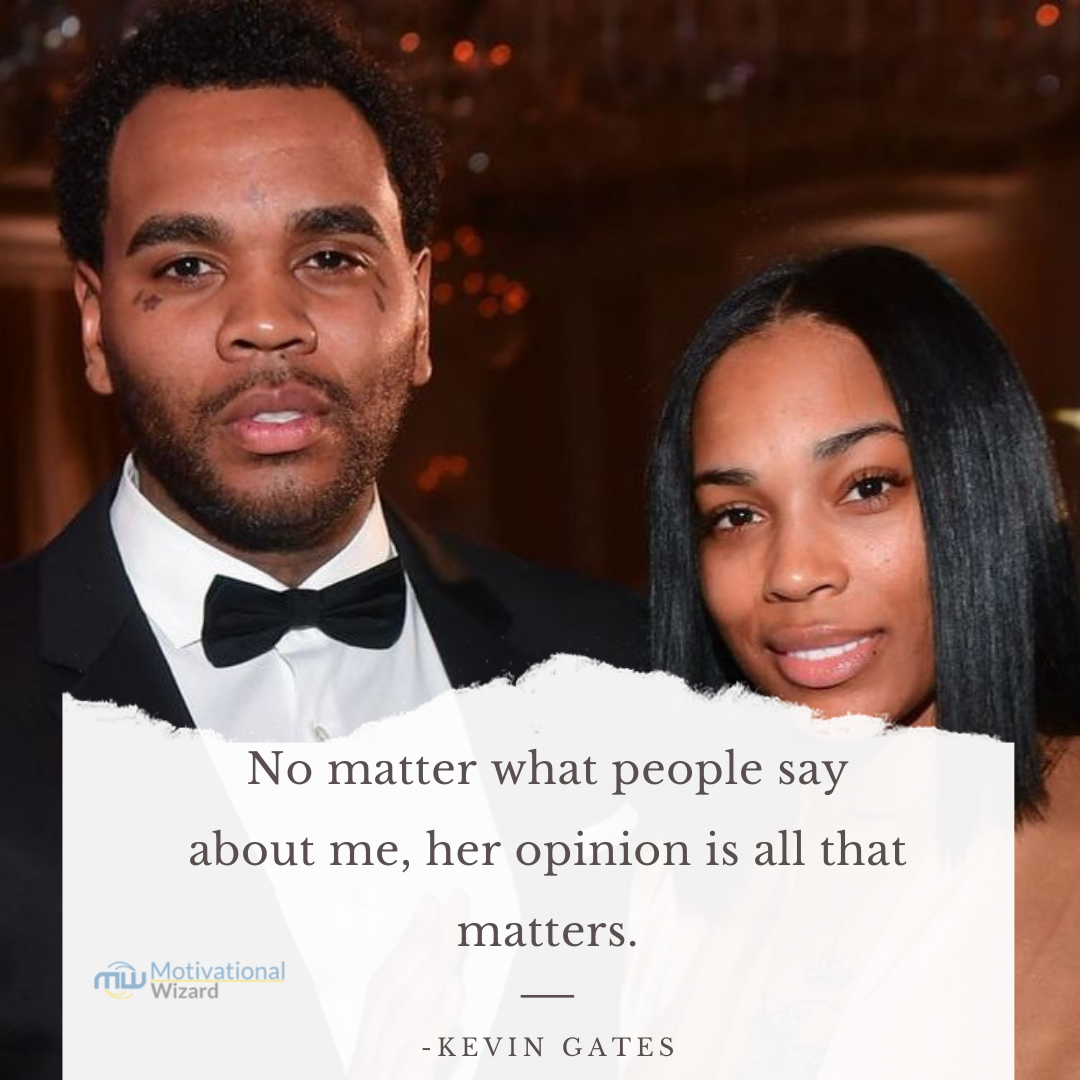 26. I live by the ten percent rule. Save one, you save a thousand.-Kevin Gates

27. Came from the bottom, we aim for the stars.-Kevin Gates

29. I could care less about the particular. I like to make music.-Kevin Gates

30. Knowledge is provided but only to those who need to know.-Kevin Gates

She looks like a sweet little lamb from afar, but when you get close, you find out she skinned and ate the damn thing just to use it as a coat.