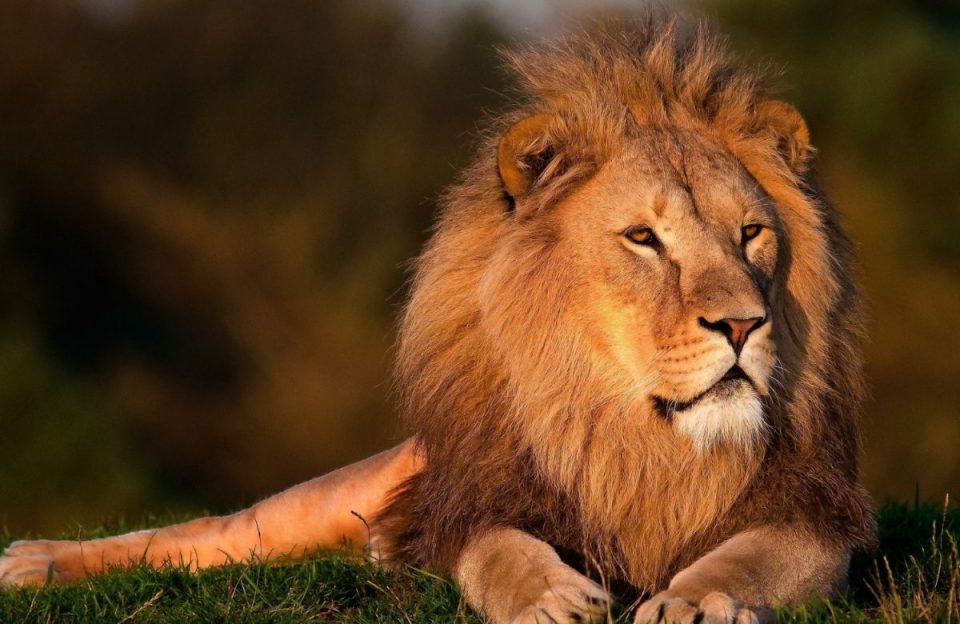 When we want to achieve something, and someone stops us, it is bound to hurt. That is when we bring out our strength and aim for the stars.

Feeling weak is no longer accepted, and you want to show the world who you are. Here are some attitude powerful lion quotes that you can have a look at. With these quotes, you can remove any weaknesses in your life and march forward.

Go through these confident attitude powerful lion quotes and regain your lost confidence. You can defeat every sign of weakness and race towards success with these quotes. Just read lion focus and wounded lion quotes every day, and you can change your mindset to that of a powerful lion soon enough.

1. Cats and lions belong to the same family but what differentiates them is their fierceness.

2. A lion is confident about his strength and won’t think twice before striking. 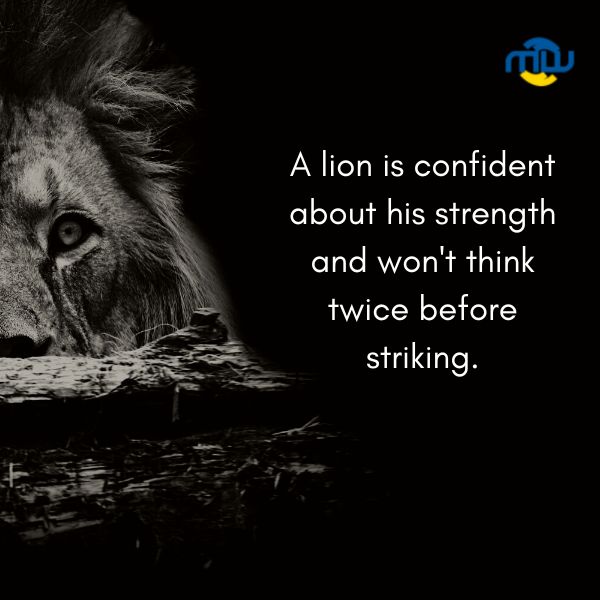 4. Observing the opponents is one of the qualities that make the lion the king of the jungle.

5. Have the attitude of a lion if you want to be unstoppable.

6. Lions aren’t greedy, they have only as much as they need each day.

7. If the lion knew his own strength, hard were it for any man to rule him.- Thomas More

8. The lion prepares the next step and preys so that he doesn’t mess up.

9. Make the best use of time and hunt your goals like a lion.

10. The truth is like a lion. You don’t have to defend it. It will defend itself.- St. Augustine

11. When you want to fulfil your dreams at any cost, you need to be as fiery as a lion.

12. If you want to be a winner then be fearless like a lion.

13. Satan prowls but he’s a lion on a leash- Ann Voskamp

14. She slept with wolves without fear, for the wolves knew a lion was among them.- R.M. Drake

Beat your fear with these dominate quotes.

16. It’s better to be a lion for a day than a sheep all your life.- Elizabeth Kenny. 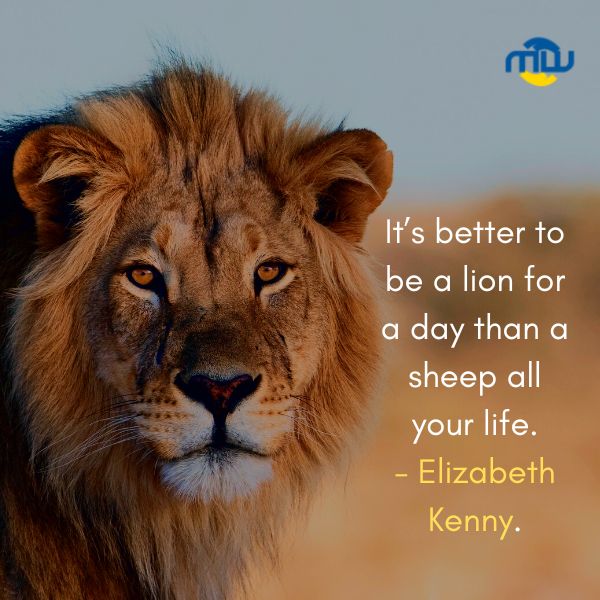 17. Lions are intimidating, that’s why everyone adores them.

18. Lions focus on only what they want and fight till they get it.

19. I’ve got a friend who is a lion tamer. He used to be a school teacher till he lost his nerve.-Les Dawson

20. An optimist is someone who gets treed by a lion but enjoys the scenery.- Walter Winchell

22. Giving up means you’ve lost hope and faith in yourself, be like the lion that hunts their prey with all their might.

Have you ever heard this “saying good times make weak men“.

23. A lion has no need to prove his strength, there is a reason why kings are respected.

24. I never thought much of the courage of a lion tamer. Inside the cage he is at least safe from people.- George Bernard Shaw

Roar Of The Lion Quotes

26. There’s silence all around when the lion enters the game of prey. 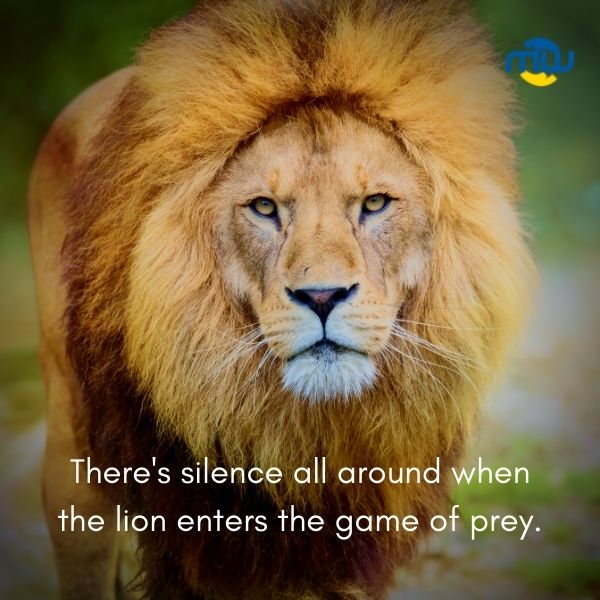 27. We fear the darkness just like the deer fears the lion.

28. The lion is, however, rarely heard – much more seldom seen.- John Hanning Speke

29. When people lose hope in you, that is when you need to be independent as a lion.

30. If you want to be a lion, you must train with lions.- Carlson Gracie

31. Success depends on your appetite.

32. Trust yourself like the lion, and you will never give up.

33. Underestimating a lion can cost you your life.

34. If it sounds like a sheep but looks like a lion, it’s probably a lion.- Nicholas Eames

35. The confidence in the lion is enough to scare away a pack of wolves.

36. They said I’m weak, today I fight lions and they kill sheep.

37. A lion is called a ‘king of beasts’ obviously for a reason.- Jack Hanna

40. If you want to be like a lion, then be the leader, not a follower.

41. A lion sleeps in the heart of every brave man.Friedrich Schiller

42. If you could cross a lion and a monkey, that’s what I’d be, because monkeys are funny and lions are strong.- Marlon Wayans

43. The lion does not turn around when a small dog barks.

44. Be as brave and wise as a lion to conquer what’s yours.

45. Run after your dreams like a lion runs after a deer.

46. Did you think the lion was sleeping because he didn’t roar?- Friedrich Schiller

47. Living one day as a lion is greater than living your life as a sheep.

48. It takes real courage to tame a lion and not everybody can do that.

49. If lions showed mercy towards their prey, they would never have existed.

50. Just believe in you, you can do anything.

Heart Of A Lion Quotes

51. You can succeed in life, you should start hunting your goals like a lion.

52. Behave like a mighty lion and gather respect wherever you go.

53. A lion sleeps in the heart of every brave man.- Turkish Proverb 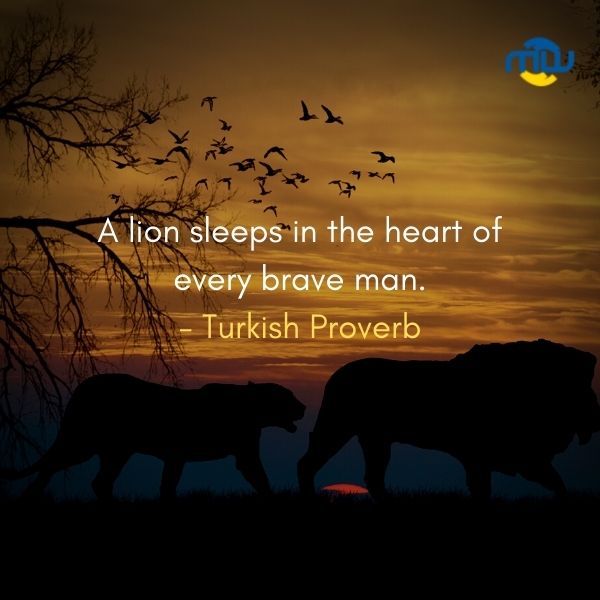 54. Even if a group of wild animals try to take over a lion the lion is confident of taking them down all alone.

55. You will never be proud without courage.

56. If you are brave like the lion, then you can survive any difficulty of life.

57. You will be patient and focused.

58. If you are a lion, do not fear the opinions of goats.

59. The lion is the defender of faith, strength, valor, fortitude, and kingliness.- Murray Zimiles

60. If ever you feel like an animal among men, be a lion.- Criss Jami

If you are woman then you must like our collection of female attitude quotes.

61. Stay strong like a lion, and all your fears will disappear. 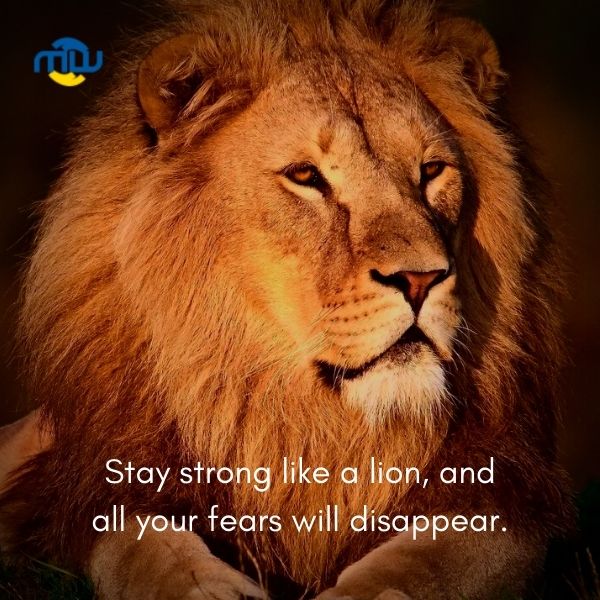 62. Setting a goal is not enough, hunt them.

63. You need to learn to hunt like a lion if you want to fulfil your dreams.

64. A lion alone can rule the whole of the Jungle.

65. If you cannot learn to fight like a lion, then you will never be the king.

66. A lion chased me up a tree and I greatly enjoyed the view from the top.- Confucius

68. Everyone wants to get, but some of them hunt.

69. A lion doesn’t concern itself with the opinion of sheep.- George R.R. Martin

70. A dog disguised as a lion is enough to scare away the hyenas.

71. Lions don’t usually miss their prey but when they do they strike harder next time. 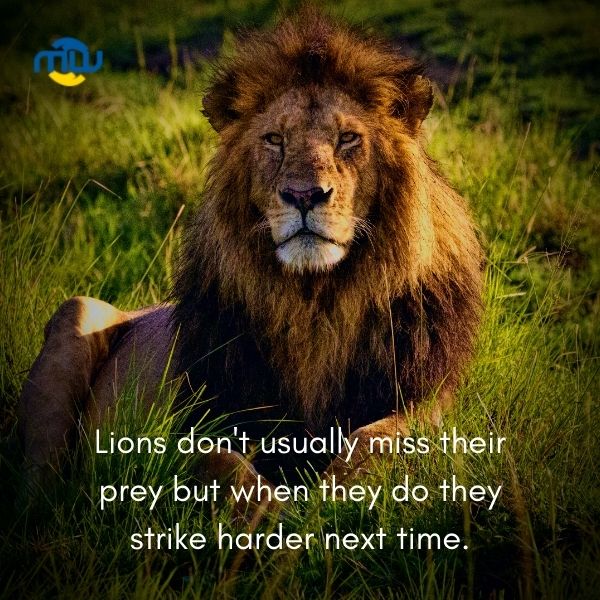 72. If a lion could talk, we could not understand him.- Ludwig Wittgenstein.

73. Only in art will the lion lie down with the lamb, and the rose grow without thorn.- Martin Amis

74. A lion doesn’t concern himself with the opinion of sheep.

76. Did you think the lion was sleeping because he didn’t roar?

77. The scars on the body of a lion are evidence of its success.

78. A lion gets what it wants and never takes no for an answer.

80. It’s not in the nature of the lamb to mourn the lion.- Peter Watts

30 Best Quotes About Happiness Which Will Bring A Big Smile

50 Forgiveness Quotes To Motivate You To Let Go The Past