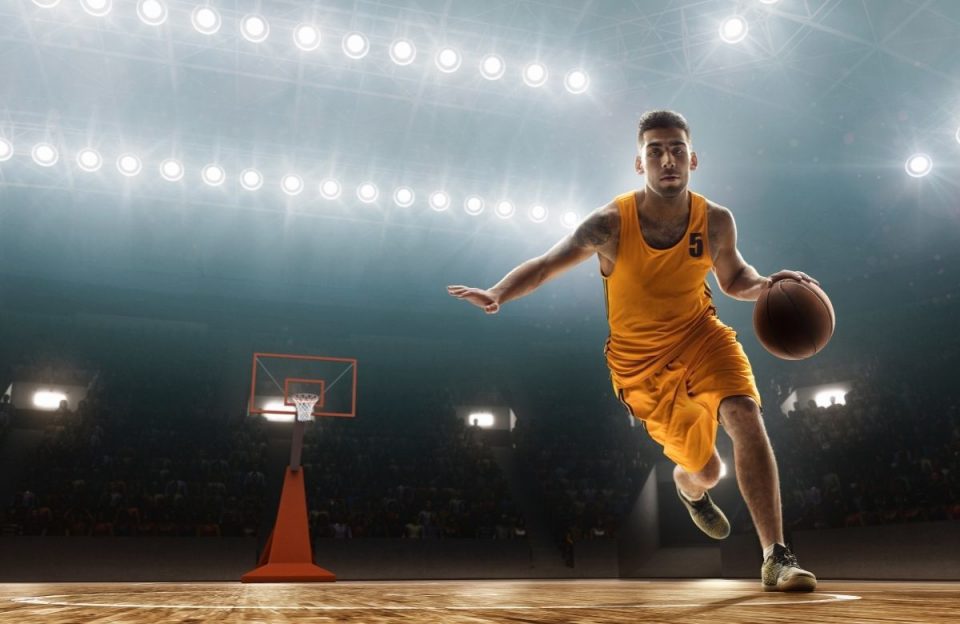 Basketball is one of the most popular sports at present. However, not everyone can succeed in the game. It requires a lot of dedication and hard work to reach the top position as a basketball player. Being motivated is the only way to succeed in this game.

So if you are a basketball player, you would need the inspiration to keep striving hard. Here are some motivational basketball quotes we have compiled for players like you. Have a look at them, as they would give you a reason to get up and give your best shot every morning.

What Is A Good Quote For Basketball? 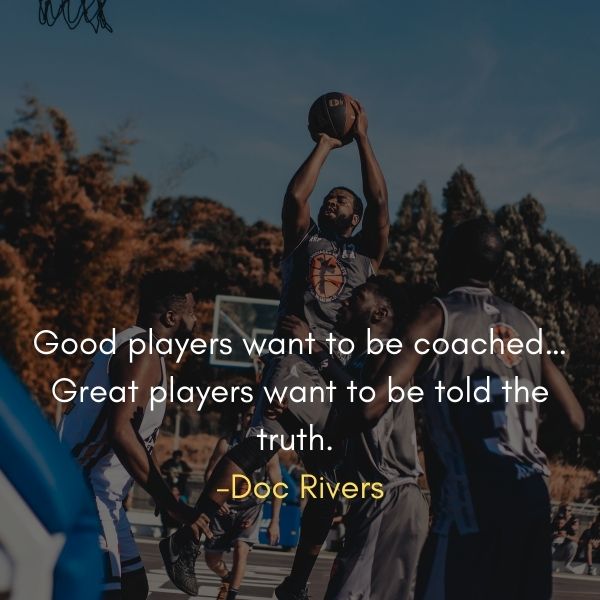 2. “If you do the work you get rewarded. There are no shortcuts in life.”-Michael Jordan

3. “If all I’m remembered for is being a good basketball player, then I’ve done a bad job with the rest of my life.”- Isiah Thomas

5. “Leadership is diving for a loose ball. It’s about being able to take it as well as dish it out. That’s the only way your going to get respect from other players”-Larry Bird

7. “What do you do with a mistake: recognize it, admit it, learn from it, forget it.”-Dean Smith

8. “Obstacles don’t have to stop you. If you run into a wall, don’t turn around and give up. Figure out how to climb it, go through it, or work around it.”-Michael Jordan

9. “My attitude is that if you push me towards something that you think is a weakness, then I will turn that perceived weakness into a strength.”-Michael Jordan

10. “Good thing in this business is that you just have to make one big shot and that’s enough to make you forget 9 other shots that you missed.”-Guy Zucker

12. “A coach is someone who can give correction without causing resentment.”-John Wooden

13. “If every basketball player worked as hard as I did, I’d be out of a job.”-Steve Nash

14. “I gave everything I had to basketball. The passion is still there, but the desire to play is not. It was a great ride.”-Allen Iverson

15. “We learn to make a shell for ourselves when we are young and then spend the rest of our lives hoping for someone to reach inside and touch us. Just touch us—anything more than that would be too much for us to bear.”- Bill Russell

16. “One man can be a crucial ingredient on a team, but one man cannot make a team.”- Kareem Abdul-Jabbar 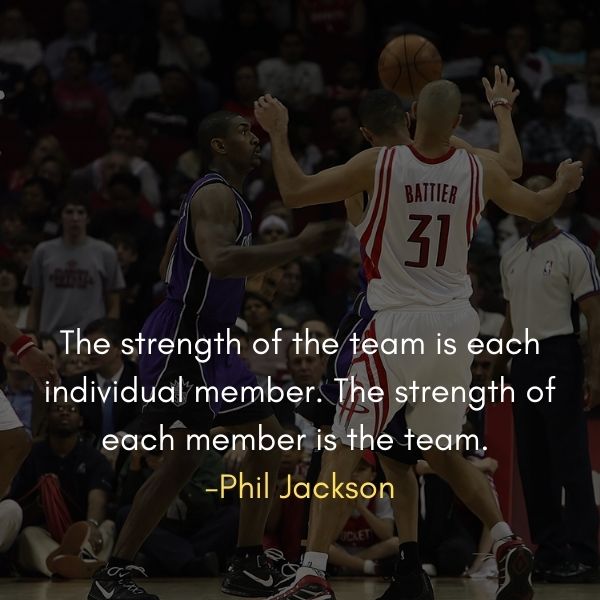 19. “Recognize and reward players who put the team first, not just the gifted ones.”-Don Meyer

20. “Basketball is a beautiful game when the five players on the court play with one heartbeat.”-Dean Smith

21. “Sometimes a player’s greatest challenge is coming to grips with his role on the team.”- Scottie Pippen

24. “Sometimes a player’s greatest challenge is coming to grips with his role on the team.”-Scottie Pippen

25. “One man can be a crucial ingredient on a team, but one man cannot make a team.”- Kareem Abdul-Jabbar

You may like to read Never Give Up Quotes

26. “The goal is to make practice more difficult, physically/mentally, than anything your players will face during a game.”-Bob Knight

27. “Ability may get you to the top, but it takes character to keep you there.”-John Wooden

28. “A winner is someone who recognizes his God-given talents, works his tail off to develop them into skills, and uses these skills to accomplish his goals.”-Larry Bird

29. “But that’s the thing about basketball: you don’t play games on paper.”- Bill Simmons

30. “How good can we expect to be if our best player is not our best teammate.”-Brad Stevens

31. “The key to success is failure”-Michael Jordan 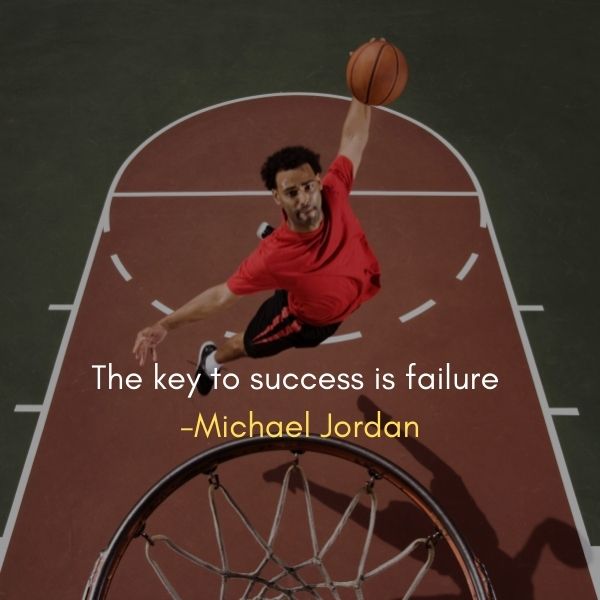 32. “Failure is acceptable. but not trying is a whole different ball park.”-Michael Jordan

33. “Limits, like fears, are often just an illusion.”-Michael Jordan

34. “Nothing is given. Everything is earned.”-LeBron James

36. “You cant win unless you learn how to lose.”-Kareem Abdul-Jabbar

37. “If you quit ONCE it becomes a habit. Never quit!”-Michael Jordan

38. “It is amazing how much can be accomplished if no one cares who gets the credit.”-John Wooden

39. “Me shooting 40% at the foul line is just God’s way of saying nobody’s perfect.”-Shaquille O’Neal

40. “You must expect great things of yourself before you can do them.”-Michael Jordan

42. “Excellence is not a singular act, but a habit. You are what you repeatedly do.”-Shaquille O’Neal

43. “The day I stopped worrying about stats is the day I started winning.”-Shaquille O’Neal

44. “I always wanted to be a basketball player. Nothing more, nothing less.”-Dirk Nowitzki

45. “It takes three things to be a ‘special’ player: talent, character, and competitive fire.”-Kevin Eastman

46. “But that’s the thing about basketball: you don’t play games on paper.”-Bill Simmons

47. “There’s a great quote by Julius Irving that went, ‘Being a professional is doing the things you love to do, on the days you don’t feel like doing them.’”-David Halberstam

48. “They say that nobody is perfect. Then they tell you practice makes perfect. I wish they’d make up their minds.”- Wilt Chamberlain

49. “Ability may get you to the top, but it takes character to keep you there.”- John Wooden

50. “If all I’m remembered for is being a good basketball player, then I’ve done a bad job with the rest of my life.”-Isiah Thomas

52. “Once I made a decision, I never thought about it again.”-Michael Jordan 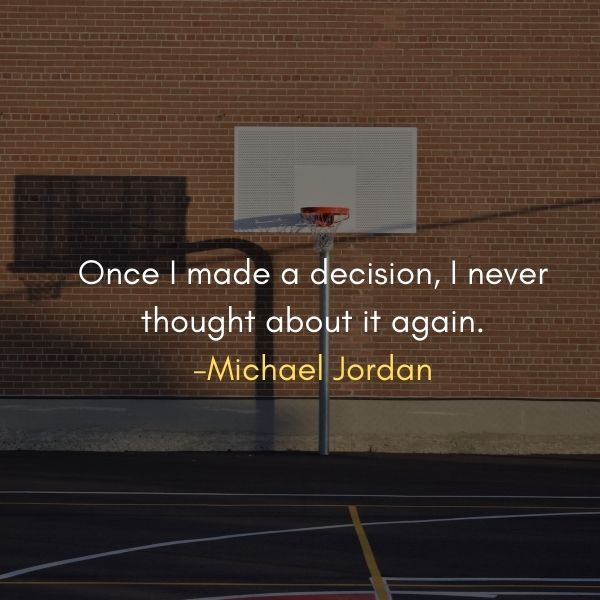 54. “Everyone has the fire, but the champions know when to ignite the spark.”- Amit Ray

55. “Concentration and mental toughness are the margins of victory.”-Bill Russell

56. “That’s why at the start of every season I always encouraged players to focus on the journey rather than the goal. What matters most is playing the game the right way and having the courage to grow, as human beings as well as basketball players. When you do that, the ring takes care of itself.”-Phil Jackson

57. To be successful you have to be selfish, or else you never achieve. And once you get to your highest level, then you have to be unselfish. Stay reachable. Stay in touch. Don’t isolate.” -Michael Jordan

58. “Good, better, best. Never let it rest. Until your good is better and your better is best.”-Tim Duncan

59. “I can accept failure, everyone fails at something. But I can’t accept not trying.”-Michael Jordan

60. “Your limits are somewhere up there, waiting for you to reach beyond infinity.” -Arnold Henry

61. “If you want to be a better player, you have to prepare, prepare, and prepare some more.”- Kobe Bryant 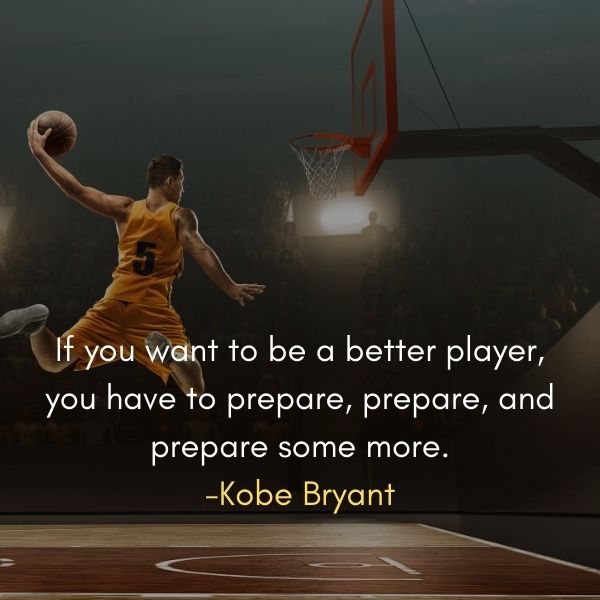 62. “The important thing is that your teammates have to know you’re pulling for them and you really want them to be successful.”-Kobe Bryant

63. “People just don’t understand how obsessed I am with winning.”-Kobe Bryant

64. “Once you know what failure feels like, determination chases success.”

66. “May you always remember to enjoy the road, especially when it’s a hard one.”

67. “If you’re afraid to fail, then you’re probably going to fail.”

68. “The beauty of coaching is growing the players from the ground up. That journey continues.”

69. “Use your success, wealth, and influence to put them in the best position to realize their own dreams and find their true purpose.”

Motivational Quotes For Men Help You Sort Your Life Out