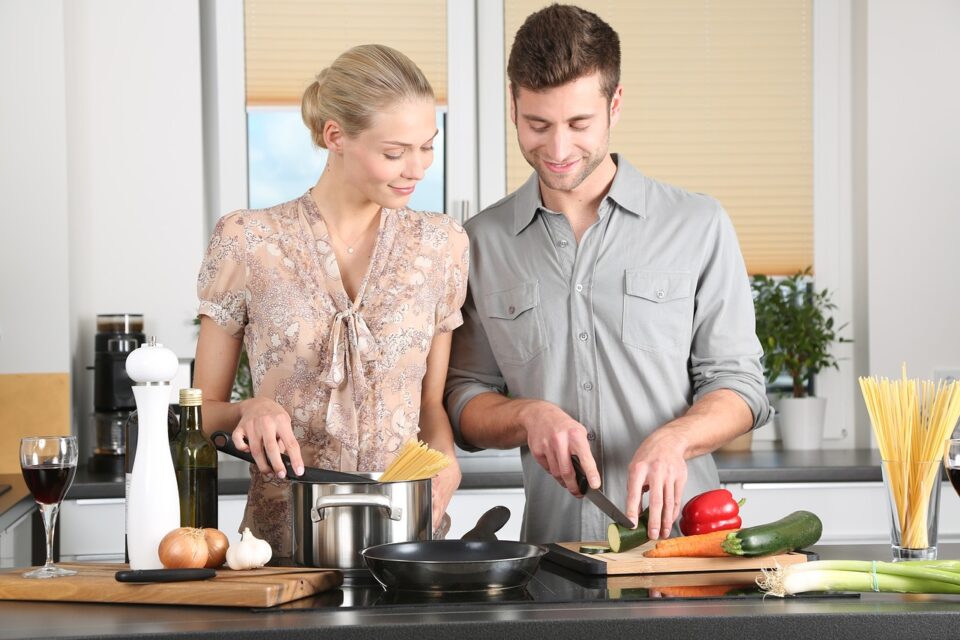 1. In France, cooking is a serious art form and a national sport.-Julia Child

2. Cooking is like snow skiing: If you don’t fall at least 10 times, then you’re not skiing hard enough.-Guy Fieri

3. Cooking is like love. It should be entered into with abandon or not at all.-Harriet Van Horne

4. If cooking becomes an art form rather than a means of providing a reasonable diet, then something is clearly wrong.-Tom Jaine

5. Cooking is actually quite aggressive and controlling and sometimes, yes, there is an element of force-feeding going on.-Nigella Lawson

7. Baking is how you start kids at cooking in the kitchen. It’s fun whether it’s baking bread or cookies. Withbaking, you have to be exact when it comes to ingredients.-Sandra Lee

8. Cooking with kids is not just about ingredients, recipes, and cooking. It’s about harnessing imagination, empowerment, and creativity.-Guy Fieri

9. Cooking is at once child’s play and adult joy. And cooking done with care is an act of love.-Craig Claiborne

11. Cooking is not difficult. Everyone has taste, even if they don’t realize it. Even if you’re not a great chef, there’s nothing to stop you understanding the difference between what tastes good and what doesn’t.-Gerard Depardieu

12. Cooking is about passion, so it may look slightly temperamental in a way that it’s too assertive to the naked eye.-Gordon Ramsay

13. Instead of going out to dinner, buy good food. Cooking at home shows such affection. In a bad economy, it’s more important to make yourself feel good.-Ina Garten

14. You don’t come into cooking to get rich.-Gordon Ramsay

15. Cooking is at once one of the simplest and most gratifying of the arts, but to cook well one must love and respect food.-Craig Claiborne

16. If you think well, you cook well.-Ferran Adria

17. I approach cooking from a science angle because I need to understand how things work. If I understand the egg, I can scramble it better. It’s a simple as that.-Alton Brown

18. All cooking is a matter of time. In general, the more time the better.-John Erskine

20. Once you understand the foundations of cooking – whatever kind you like, whether it’s French or Italian or Japanese – you really don’t need a cookbook anymore.-Thomas Keller

21. If you’re not the one cooking, stay out of the way and compliment the chef.-Michael Strahan

22. The smells of slow cooking spread around the house and impart a unique warmth matched only by the flavour of the food.-Yotam Ottolenghi

23. Cooking requires confident guesswork and improvisation– experimentation and substitution, dealing with failure and uncertainty in a creative way.-Paul Theroux

24. Cooking is an observation-based process that you can’t do if you’re so completely focused on a recipe.-Alton Brown

25. Cooking demands attention, patience, and above all, a respect for the gifts of the earth. It is a form of worship, a way of giving thanks.-Judith B. Jones

26. In cooking, as in all the arts, simplicity is the sign of perfection.-Curnonsky

28. Cooking is like making love, you do it well, or you do not do it at all.-Harriet Van Horne

29. Cooking is at once child’s play and adult joy. And cooking done with care is an act of love.-Craig Claiborne

30. Cooking is one failure after another, and that’s how you finally learn.-Julia Child

Quotes About Being Alone