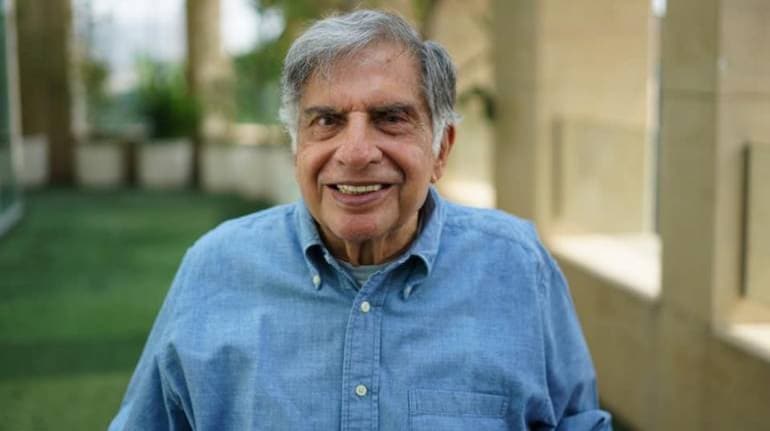 Ratan Tata is an inspiration to many in the business arena. His achievements are not just limited to being a business tycoon. He is a visionary, Philanthropist, and basically a legend. Ratan Tata has also been awarded the Padma Vibhushan.

He has given wings to the dreams of many individuals.

Both his work and his words have the power to change the world. There are a lot of things that we can learn from him. Ratan Tata owns the Tata Group of India, and even though he is more affluent than Bill Gates, he is not mentioned in the list of the world’s richest men. This is because 65% of the family and company’s earnings are given to charity.

Ratan Tata guided the company into acquiring Corus Steel and Jaguar Land Rover. The Joint Venture with Starbucks was another great idea of Tata as he handed over the reins to his successor Cyrus Mistry.

He has shown immense courage in his decisions. He always uses his earned wealth not only for himself but for the upliftment of society. Whether it was acquiring international brands like Jaguar, Corus, and Tetley or supporting the Tata employees after the 26/11 attacks, he ensured that the Tata group could execute everything successfully.

His global outlook and thought process was honored with Padma Vibhushan in 2008 and the Padma Bhushan award in 2000. Read on some amazing Ratan Tata quotes that will inspire you to struggle and achieve the impossible. As he has rightly said, “I don’t believe in taking the right decisions. I take decisions and then make them right.” 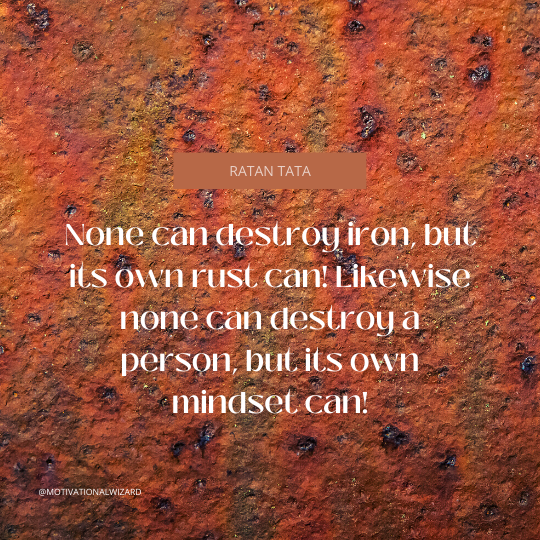 3. Ups and downs in life are very important to keep us going, because a straight line even in an ECG means we are not alive

4. I’ve often felt that the Indian tiger has not been unleashed.

5. Power and wealth are not two of my main stakes. 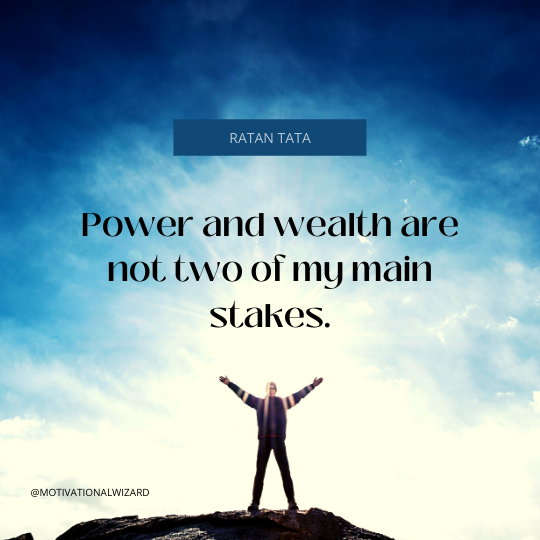 6. Apart from values and ethics which I have tried to live by, the legacy I would like to leave behind is a very simple one – that I have always stood up for what I consider to be the right thing, and I have tried to be as fair and equitable as I could be.

7. I will certainly not join politics. I would like to be remembered as a clean businessman who has not partaken in any twists and turns beneath the surface, and one who has been reasonably successful.

8. I may have hurt some people along the way, but I would like to be seen as somebody who has done his best to do the right thing for any situation and not compromised.

9. People still believe what they read is necessarily the truth.

10. I would say that one of the things I wish I could do differently would be to be more outgoing.

11. When you see in places like Africa and parts of Asia abject poverty, hungry children and malnutrition around you, and you look at yourself as being people who have well being and comforts, I think it takes a very insensitive, tough person not to feel they need to do something.

12. I have been constantly telling people to encourage people, to question the unquestioned and not to be ashamed to bring up new ideas, new processes to get things done.

13. I came seriously close to getting married four times, and each time I backed off in fear or for one reason or another. Each occasion was different, but in hindsight when I look at the people involved, it wasn’t a bad thing what I did. I think it may have been more complex had the marriage taken place. 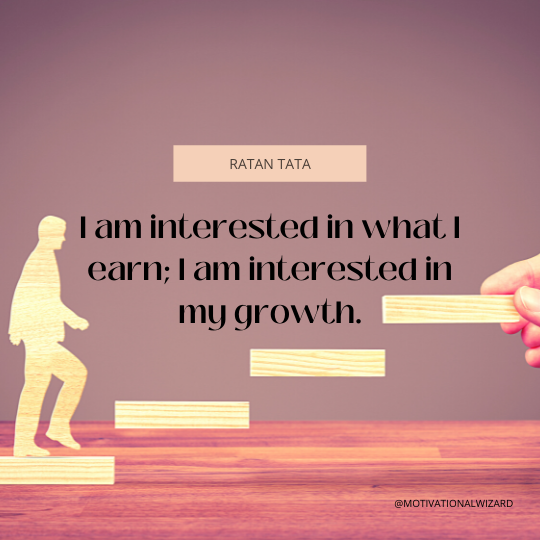 16. If we dispense with some of our self-made boundaries, India can really take its place in the world as an economic power. It hasn’t happened because we, sadly, don’t look at ourselves as Indians but as Punjabis or Parsis, unlike the Americans. Don’t make such boundaries.

17. India needs to come out of its socialist pattern of doing things on a rationing basis.

19. The early Rockefellers made their wealth from being in certain businesses and remained personally very wealthy.

20. Take the stones people throw at you, and use them to build a monument 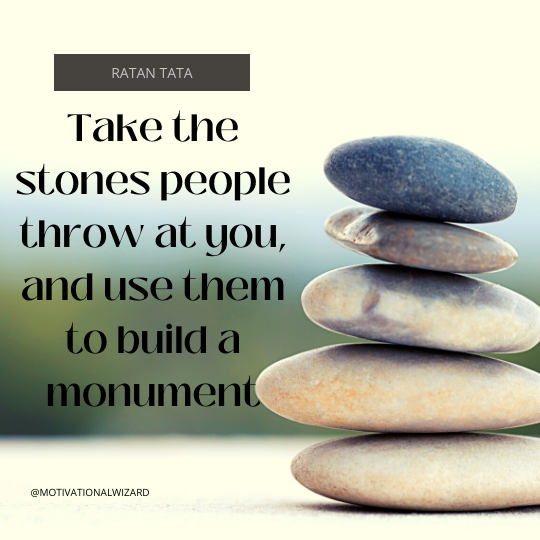 21. My most visible goal is to do something in nutrition to children in India, and pregnant mothers. Because that would change the mental and physical health of our population in years to come.

22. There are many things that, if I have to relive, maybe I will do it another way. But I would not like to look back and think what I have not been able to.

23. Young entrepreneurs will make a difference in the Indian ecosystem.

24. At Tatas, we believe that if we are not among the top three in an industry, we should look seriously at what it would take to become one of the top three players.. or think about exiting the industry.

25. The strong live and the weak die. There is some bloodshed, and out of it emerges a much leaner industry, which tends to survive. 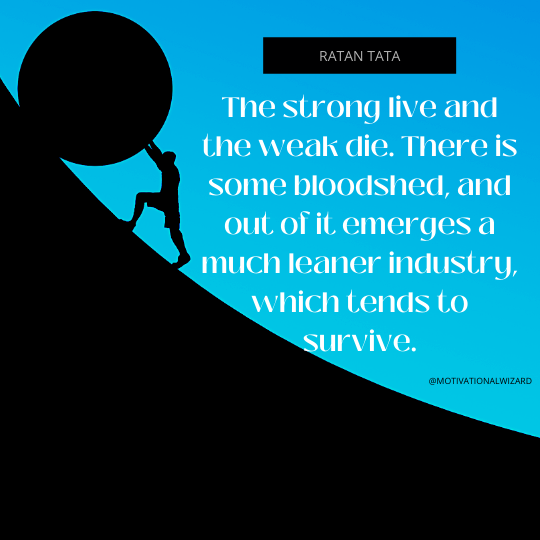 26. All of us do not have equal talent, yet all of us have an equal opportunity to develop our talent.

27. Deal with Crisis in such a way that you can hold your head high and sleep well at night.

28. Business need to go beyond the interest of their companies to the communities they serve. 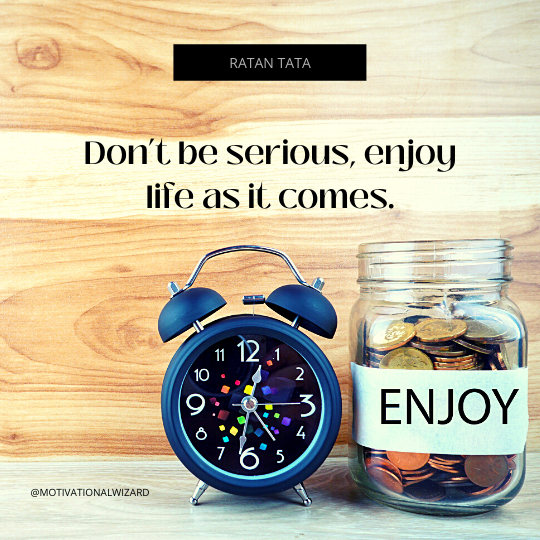 31. I admire people who are very successful. But if that success has been achieved through too much ruthlessness, then I may admire that person, but I can’t respect him.