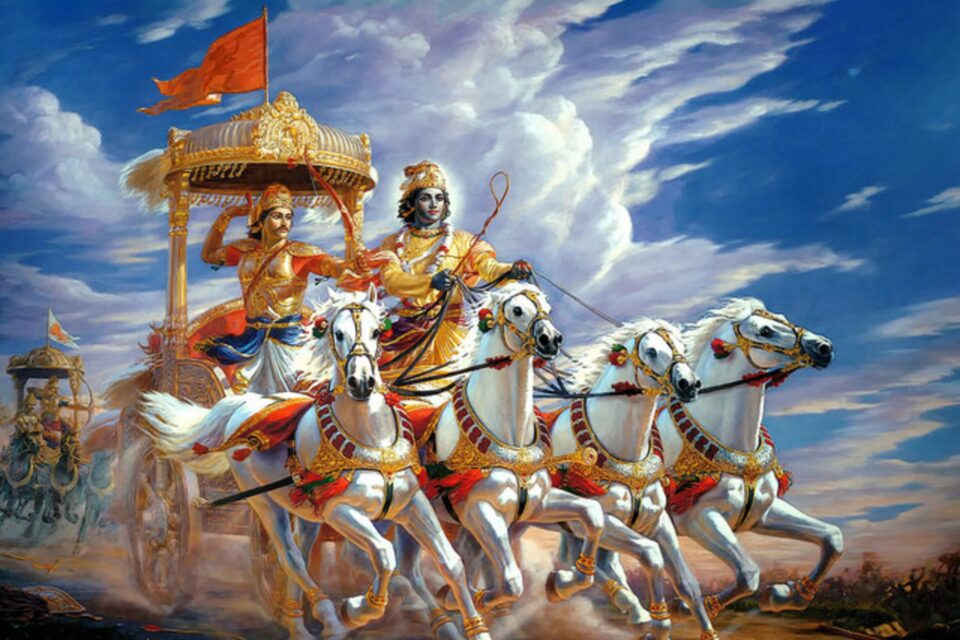 Mahabharata is not just a war story, it also tells you about various war strategies and culture, it has high-valued words and tremendous teachings which are equally effective even in today’s time.

You will find that every character of Mahabharata comes with different powers, visions, circumstances, relationships, and various emotions. It is unbelievable how easily Mahabharata explains the reality of this world.

It simplifies the entire life cycle with its Karmic principles. Mahabharata is a great work of art and much more than just a religious book, it gives you exceptional life lessons.

Mahabharata is a guide to help you live a meaningful life and these quotes will assist you find the answers to all your questions.

Here are some quotes from Mahabharata that are not only meaningful but also celebrated.

1. “Time creates all things and time destroys them all. Time burns all creatures and time again extinguishes that fire.” 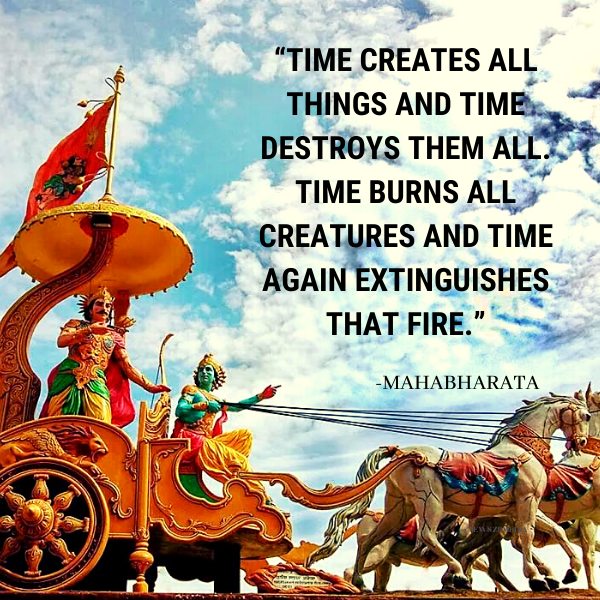 2. “What is a greater happiness to a father than what the father feels when his son, running to him, clasps him with his tiny little arms, though his body is full of dust and dirt.”

5. “Men lose good judgment in things which concern their interest.”

6. “Success that is obtained by negotiations and other means is the best. Success which is secured by creating disunion amongst the enemy is temporary. Success secured by battle is the worst.”

7. “Men experience happiness and misery by turn. No man ever enjoys unmixed happiness. A wise man, possessing high wisdom, knowing that life has its ups and downs, is neither filled with joy nor with grief. When happiness comes, one should enjoy it, and when misery comes one should bear it.”

8. “Pleasant looks, cheerful heart and sweet words are due to a guest. Rising up, the host should advance towards the guest; he should offer him a seat, and duly worship him. This is the eternal Dharma.”

10. “A wise man should never contract friendship with the wife of the king nor with other attendants of his, nor with those whom he despises and who are hostile to him.”

12. “Men of immature understanding begin an act without having an eye to what may happen in future.”

13. “A man who starts a fire and then covers it up in a garment, sorrows when he is scorched. Such a person is not regarded as learned.”

14. “‘I know what is right but I cannot do it; I know what is wrong but cannot desist from doing it.’” -(Duryodhana in the Mahabharata) 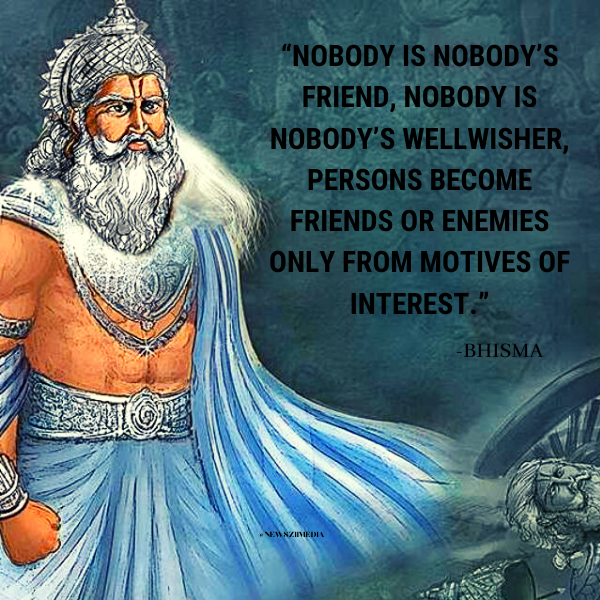 16. “A person should never do that to others, which he does not like to be done to him by others.” -Bhisma

17. “There are two forces: fate and human effort – All men depend on and are bound by these, there is nothing else.” -(Kripa in Mahabharata)

18. “A true holy bath consists in washing the mind clean of all impurities.”

19. “Anger is a great vice. So too is pride. Together they can destroy a man’s commonsense. Their explosive combination can even destroy his basic sense of self preservation.”

20. “If you start a work, take rest only after its completion; otherwise, the (incomplete) work will finish you.” -Devarata to King Shantanu in Mahabharata

22. “Be generous, not wasteful; give, not indiscriminately…”

23. “The body of a man is like the chariot; his soul, the driver; and his senses, the horses. Drawn by those excellent steeds when well trained, he that is wise and patient, performs life’s journey in peace.” -Vidura

24. “Wrath is a bitter remedy for evils, it causes malady in the head, destroys fame, and is a source of sinful acts. It ought to be controlled by a good man and those that do not control it are bad men.” -Sanjaya

25. “The root of all mental ailments is affection. Affection makes a man attached and that leads to misery.”

27. “Valour at the right place and right time is recommended for our welfare.”

28. “A war guarantees victory only if it is at the right time and the right place. But if it is conducted at the wrong time, it does not bring any fruits.” 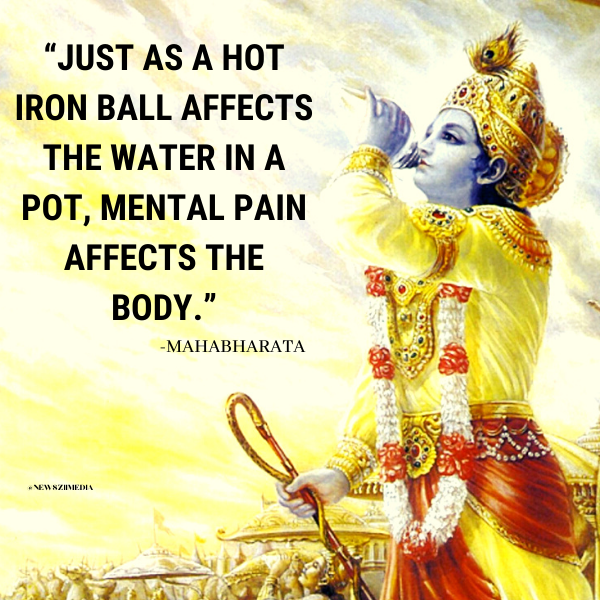 31. “Every kind of happiness and unhappiness results from attachment.”

32. “Attachment is the root of all unhappiness and attachment causes fear.”

33. “A person of good acts and good, agreeable and sweet speech has no equal.”

34. “Let a man fix his mind on the reality and, having done this, he will transcend time.”

35. “Do throughout your life that which will bring happiness in your life hereafter.”

36. “War causes destruction to all, it is sinful, it creates hell, it gives the same result in victory and defeat alike.” -Sanjaya

37. “There are many evils in battle: the first and the foremost is slaughter. Victory is always uncertain. It depends on chance. Even those that obtain victory have to suffer losses.” -Vyasa

38. “The man who suffers evil for his own misconduct should not attribute it to others.” -SANJAYA

39. “They that are desirous of victory do not so much conquer by might and prowess, as by truth, compassion, piety and virtue. Fight without any arrogance, for victory is certain to be there where righteousness is.” -Sanjaya

40. “In this world, the relationship between the virtuous is more important than a relationship resulting from birth.” -Bhishma to Karna

42. “Men that are heroic, virtuous and most exalted, having defeated an enemy, neither boast of themselves with harsh words, nor indulge in abusive language.” -Sanjaya

43. “Passion, engagement, skill and policy – these are the means to accomplish objectives.” -Ashwatthama

44. “The biggest drawback of anger is that it cannot differentiate between good and bad.” -Bhishma Pitamha to Arjuna

45. “Fools are those trying to teach the one who cannot be taught and those talking to the one who listens to them with mistrust.” 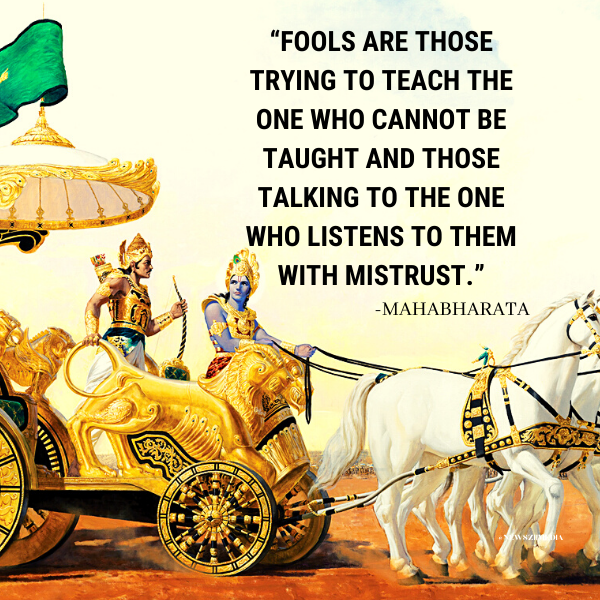 46. “Sorrow comes after happiness, and happiness after sorrow; One does not always suffer sorrow, nor always enjoy happiness.” -Vyasa

47. “Words are invaluable , speak them if you must. Weigh them carefully before you speak them out.” -Yudhishthira to Draupadi

48. “Sometimes lying is as good as speaking truth.”

49. “This body which is the conglomeration of the five elements is governed only by Time. Nothing else is able either to protect it or to destroy it.” -(Sage Narada Advice to Yudhishtira)

50. “Swayed by pride, men walk in paths that are unrighteous. None among them succeeds in attaining his real nature.”

51. “Conquer anger with forgiveness, win the wicked with kindness, educate the niggardly (ungenerous with time, money etc) with generosity, overcome injustice with truth.”

60 Self Love Quotes To Appreciate Yourself