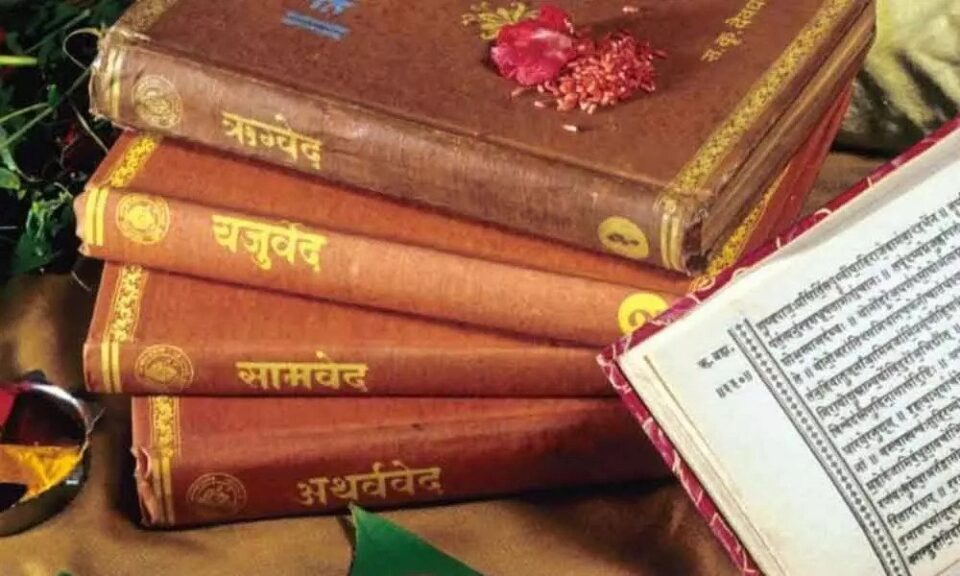 Vedas are the ancient and most revered texts that are the foundation pillars of Hindu scripture. Initially, they were conveyed by word of mouth and later got documented in c.1500 and 1200 BCE during the Samhitā epoch.

There are four Vedas: Rig-Veda has 1026 hymns in a priestly establishment; Yajur Veda is about prayers and religious expressions; Sama Veda contains hymns from the Rig-Veda and sung together to scale of seven notes rather than the three notes used for other Vedic narrations; and Atharva Veda is a collection of famous hymns, mantras and incantations. Apprise your Vedic knowledge with these special quotes on Vedas.

1. “Do not be led by others,
awaken your own mind,
amass your own experience,
and decide for yourself your own path.”
-Veda 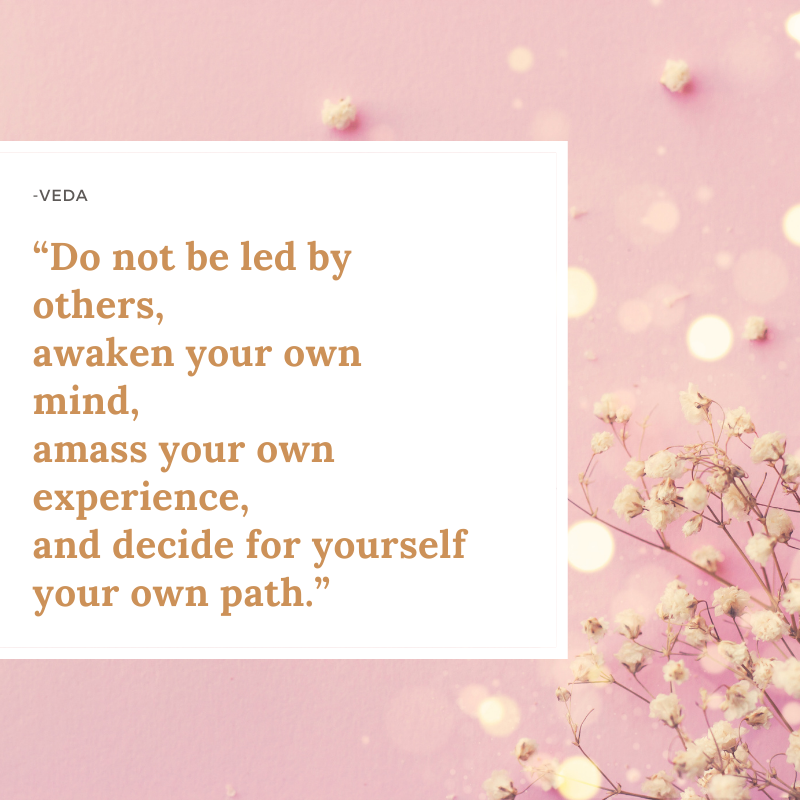 2. “This earth is His, to Him belong those vast and boundless skies; Both seas within Him rest, and yet in that small pool He lies.”
-Atharvaveda

4. Most humbly we bow to You, O Supreme Lord.
At Your command moves the mighty wheel of time.
You are eternal, and beyond eternity.
-(Artharva Veda)

5. The one who loves all intensely
begins perceiving in all living beings
a part of himself.
He becomes a lover of all,
a part and parcel of the Universal Joy.
He flows with the stream of happiness,
and is enriched by each soul.
-(Yajur Veda)

6. The human body is the temple of God.
One who kindles the light of awareness within
gets true light.
The sacred flame of your inner shrine
is constantly bright.
The experience of unity
is the fulfillment of human endeavors.
The mysteries of life are revealed.
-(Rig Veda)

7. Sing the song of celestial love, O singer!
May the divine fountain of eternal grace and joy
enter your soul.
May Brahma, (the Divine One),
Pluck the strings of your inner soul
with His celestial fingers,
And feel His own presence within.
Bless us with a divine voice
That we may tune the harp-strings of our life
To sing songs of Love to you.
-(Rig Veda)

8. A person can achieve everything by being simple and humble.

9. Laziness erodes a person of his enthusiasm and energy. As a result the person loses all opportunities and finally becomes dejected and frustrated. The worst thing is that he stops believing in himself. -Sam Veda

10. O seeker, know the true nature of your soul,
and identify yourself with it completely.
O Lord, (may we attain) the everlasting consciousness
of Supreme Light and Joy.
May we resolve to dedicate our life
to the service of humankind,
and uplift them to Divinity.
-(Yajur Veda) 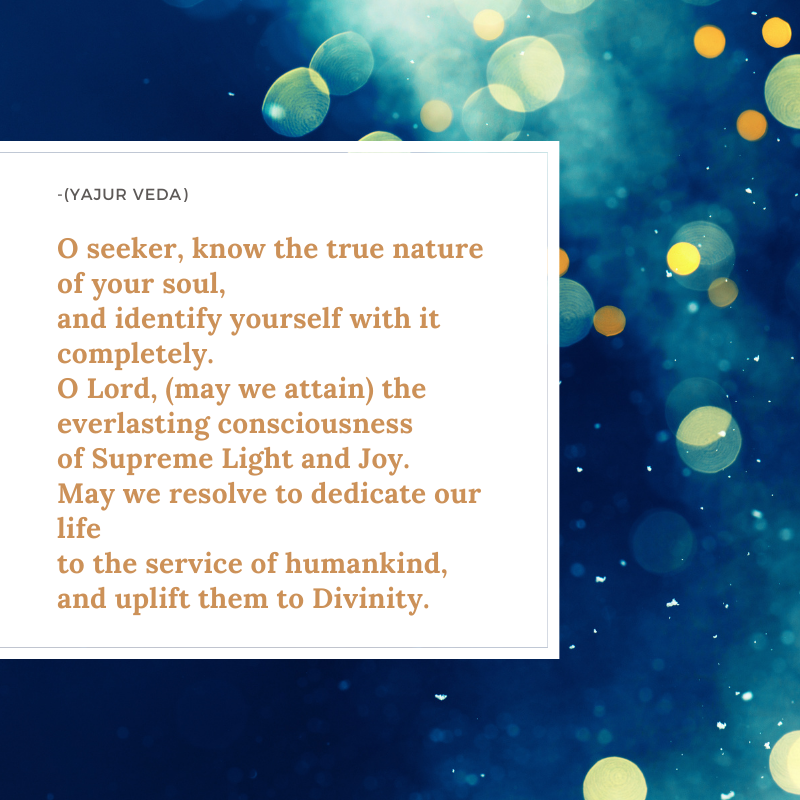 11. Let the stronger man give to the man whose need is greater; let him gaze upon the lengthening path of life. For riches roll like the wheels of a chariot, turning from one to another.

12. When there is harmony between the mind, heart and resolution then nothing is impossible.

13. Do not be under the delusion that God is somewhere and you have to search for Him; God is in you. -Atharvaveda

14. As soon as there is light, darkness vanishes and as a result, surroundings become clearly visible. -SamaVeda

15. Most humbly we bow to You, O Supreme Lord. At Your command moves the mighty wheel of time. You are eternal, & beyond eternity. -AtharvaVeda

16. We should take inspiration from the sun and work constantly for the benefit of mankind, so that peace and prosperity prevails everywhere. -Sam Veda

17. Truth is one; sages call it by various names. -Rig Veda

18. Our words exhibit our nature, the type of person we are and the way we think. -Sam Veda

19. One should respect his motherland, his culture and his mother tongue because they are givers of happiness. -Rig Veda

20. An egotist can never be humble that is why he is seldom blessed even by god. -Rig Veda 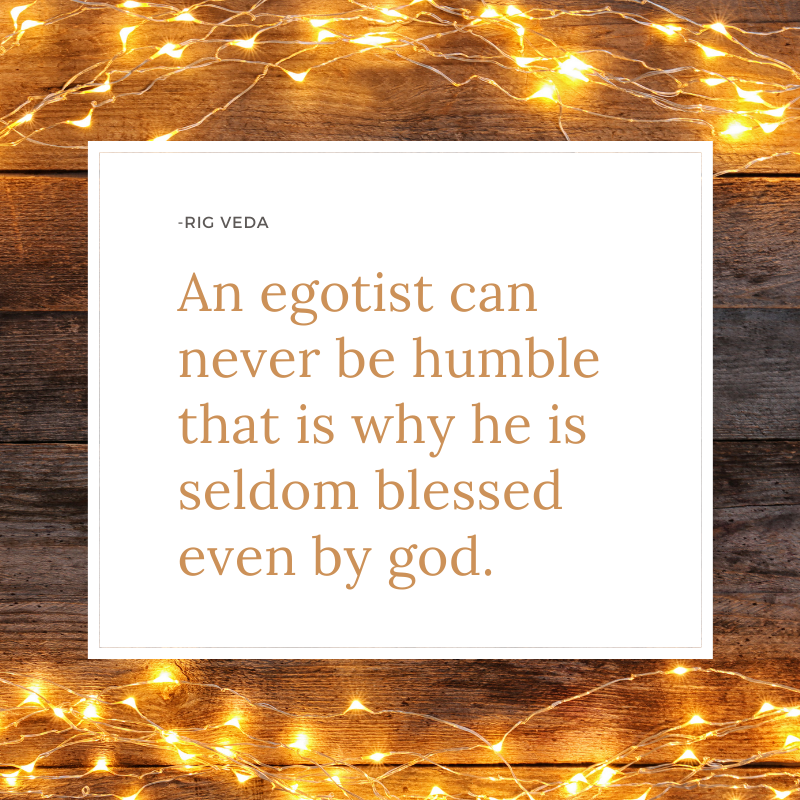 21. A man’s growth and progress will be hindered if he does not have a pure-mind and a clean body. -Sam Veda

22. All good, intellectual people come together at one place and try to bring harmony by means of exchange of thoughts and ideas. When all of them unite they progress rapidly and attain their aims. The external forces cannot harm them in any way. -Rig Veda

23. Let the stronger man give to the man whose need is greater; let him gaze upon the lengthening path of life. For riches roll like the wheels of a chariot, turning from one to another. -Rig Veda

24. We should take inspiration from the sun & work constantly for the benefit of mankind, so that peace and prosperity prevails. -SamVeda

25. If one is determined and honest and also willing to give his best efforts then attaining liberation is not impossible.

26. One should performed karma for the benefit of humanity with an unbiased approach because bias gives birth to evil, which creates thousands of obstacles in our path. -Rig Veda

27. Intelligence is the mightiest and nothing is beyond its reach. -Rig Veda

28. The one who is first and possessed of wisdom when born the god who strove to protect the gods with strength the one before whose force the two worlds were afraid because of the greatness of his virility, he, O people, is Indra. -Rig Veda

29. When something is thought of it can then be desired. -Rig Veda

30. Do good and have good in return; be bad and accept the bad that comes back to you. -Atharvaveda

31. No one is superior or inferior; all are brothers; all should strive for the interest of all and progress collectively. -Rigveda

33. One whose mind is pure and chaste, and who works incessantly all the desires of his heart are fulfilled. -Rig Veda

35. May our intentions and aspirations be alike, so that a common objective unifies us all. -Rig Veda

36. Only by indulging in good deeds can one expect good results. -Rig Veda

37. One has to be humble if he desires to acquire knowledge. -Rig Veda

38. Knowledge is the most important thing without which one cannot achieve his goal. -Rig Veda

39. The non-existent was not the existent was not at that time. The atmosphere was not nor the heavens which are beyond. What was concealed Where In whose protection Was it water An unfathomable abyss. -Rig Veda

40. There was neither death nor immortality then. There was not distinction of day or night. That alone breathed windless by its own power. Other than that there was not anything else. -Rig Veda 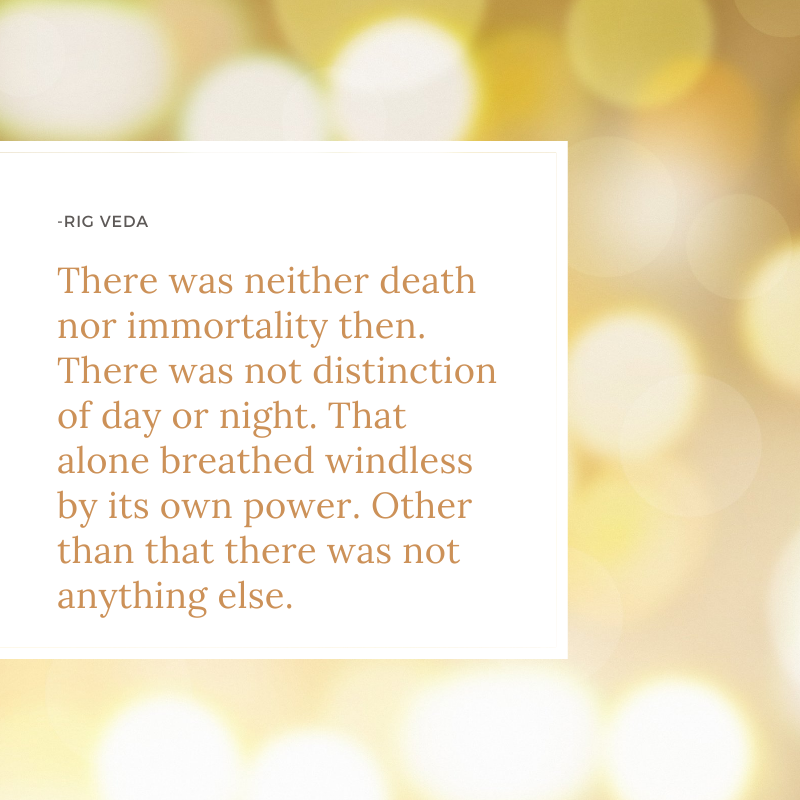 42. Only a person having trusted and worthy friend’s lives and dwells in happiness on this earth. -Rig Veda

43. These five senses with the mind as sixth which abide in my heart are made sharp by means of prayer. By which all the awful works are done, may we attain peace by them. -Atharva Veda

44. Our deepest salutation to the Rishis who were our ancestors and who formulated for us this path to the inner Self. -RigVeda

45. The person who is enthusiastic attains everything through hard work and efforts. He can subdue all his enemies. -Rig Veda

46. That path of the Vedas I ordain in your home against which the enlightened persons never go nor do they bear hatred towards one another, so that it may serve as leading principle for all men. -Atharva Veda

47. Just as the Sun is respected for providing heat and energy to the world, in the same manner you too can attain respect in this world by acquiring knowledge. -Rig Veda

48. One should, perform karma with nonchalance without expecting the benefits because sooner of later one shall definitely gets the fruits. -Rig Veda

49. During times of war it is the responsibility of every citizen to inspire the valiant to engage them in war. 50. One should avoid waiting for invitation. One should always be ready to strive for welfare of others. This is the path of truth itself. -Rig Veda

50. One should constantly strive to acquire knowledge and by doing so one shall be praised and respected amongst by scholars. -Rig Veda 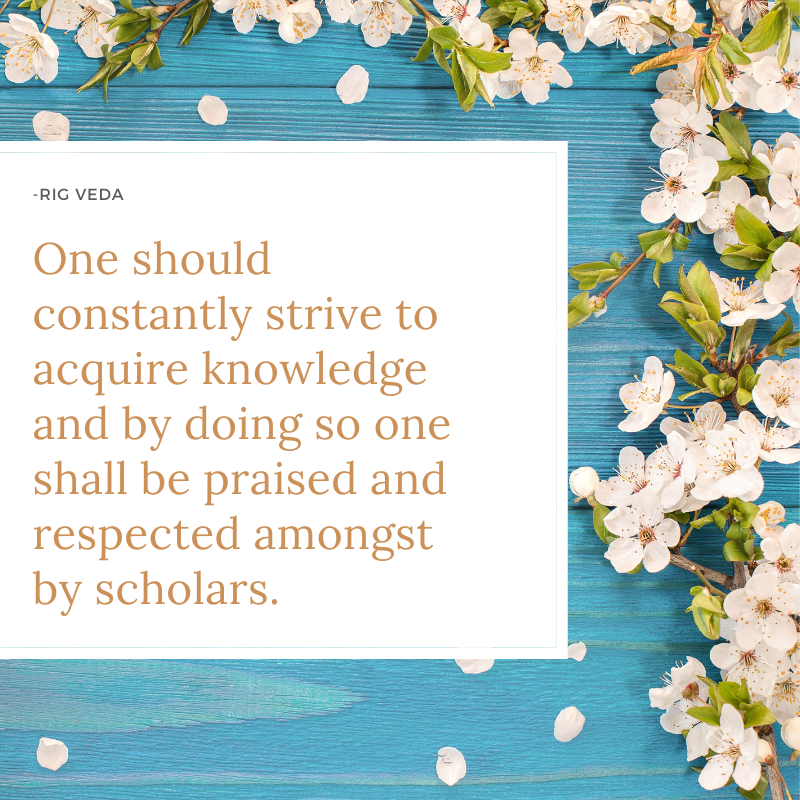 51. May I have strength in my thighs, swiftness in my legs and firmness in my feet; may all the organs of my body be healthy and may my soul be ever alert. -Atharva Veda

52. O mankind! I ordain for you to have concordance in your heart, unanimity in your minds and freedom from hatred. Every one of you ought to love one another in every way just as the cow loves the calf just born. -Atharva Veda

Best Mountain Quotes To Inspire Your Next Adventure