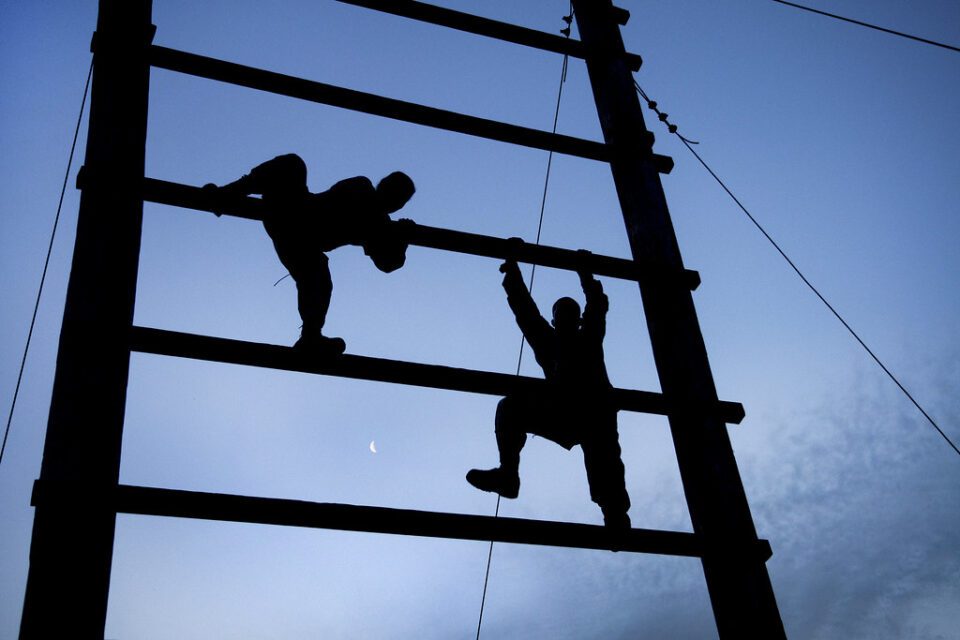 “If we can see beyond perceived limitations, the possibilities are endless.” Amy Purdy

Near the end of my walk I noticed the trees. One of them caught my attention. The morning sun peeking through the bright green leaves and branches revealed its magnificence.

The trunk was enormous, and then I noticed the crooked fence.

A section of the fence was pushed up by the giant tree trunk. The fence looked unstable and as if it was about to fall over.

As I was watching all this, I thought back to another tree that I had seen during one of my walks. The branches of the tree had reached a length so great that they pierced through the metal fence’s slats.

The wires were protected by big brown wooden knobs. In awe, i reached out to touch the large, chunky branches of the tree. I thought I could remove the wires from the fence. Not a chance. The fence was now part of the tree.

This tree made me think, “Trees do what they do.” They grow no matter what objects are next to them.

These obstacles could be seen as obstacles but they do not stop the tree growing. The tree adapts to its environment and continues growing. The barrier determines whether the tree continues to grow around the tree or if it is destroyed.

What does this symbolise in the daily life of a person?

Our true essence is to continue growing. There are many things in life that we cannot control. It seems that we find ourselves in difficult situations. We are confronted with the question “What should I do now?”

It’s not the obstacle in our path. Our beliefs about the obstacle can keep us from moving forward. The tree does not stop growing and doesn’t get in the way of the fence. It does what it is supposed to.

This is how it relates to an experience that I had in my early twenties. It was a real test of my ability to listen to my inner guidance and not the doubts of others.

At twenty-two years old, I was pregnant and single. I lived at home with my mother. I worked forty hours per week in an office, earning ten dollars an an hour. I was fortunate to have good health insurance. What I did not have was self-confidence. I carried shame around.

This was 2001. The times had changed. Why was it so shameful to be a young, pregnant, and unwed girl?

This is because even today, the stigma was still ingrained in society. My mother and my older sisters were also affected by it. It could be said that the shame felt was passed on through generations.

After the birth of my son, I knew that I wanted to make a change in my life. My son received government assistance for his food and formula. This only made me more ashamed because of the look I received at the check-out counters.

I knew that I wanted to make my son’s life better and that I had the potential to do more.

I felt a deep calling to enter the medical field. I returned to college. After I made the decision to pursue it, many obstacles arose.

Although I wasn’t yet enrolled in college, I was overcome by fear when I started to speak out about my plans.

People’s opinions only fueled my fear.

How can I go to college with a baby four months old, while also working and finding childcare? It is possible.

Others didn’t believe so. It would be difficult, they said. They said that my son was too small and suggested I wait until he was more mature.

It would be too stressful to raise my son and go to college. How do I pay tuition? How could I possibly be accepted to the highly competitive program given that I was already on academic probation?

After high school, my lack of ambition led to me dropping out of college. I also dropped out of college with low grades. How in the world was it possible for me to be accepted back at the university, especially since I was a single parent?

Everywhere you looked, obstacles would keep appearing. Even a university advisor told me that the program I was interested in was very difficult. I was asked by him if I had any family members who could help me with my son. This program is very time-consuming and rigorous.

Imagine if all these stumbling blocks could have led me to believe I wasn’t capable of achieving my goals. I could have chosen not to believe the things I heard.

My beliefs could have told me that my plan would not work. I had two choices: I could follow my inner guidance, which helped me grow, or I could think it was too difficult. I could accept the shame and the idea that there was no way out.

However, I knew deep down that this was what I was meant for. I was meant to challenge any belief system that might hold me back.

Positive thinking was not something I knew back then. I had never heard about manifestation. I didn’t have any tools to push through doubts. My inner guidance system was all I had and my strong desire to learn and prove that I was capable of doing anything.

After a lot hard work and four years later, I had graduated college with a bachelor’s in respiratory therapy. At the time, I was working at a trauma hospital. I was living on my own, supporting my family with my one income and my son. My passion for life was also what I found. I helped people with illness.

Your life is a reflection on what you believe to be true and possible. Our beliefs guide our thoughts, desires and the actions that we take to make it happen.

Don’t let your beliefs keep you down. Instead, learn from them.

How to Know You What You Believe In

1. You can choose to set a goal or change a situation.

2. Write down all beliefs about the goal or situation. Especially any beliefs that you feel are holding you back.

3. These beliefs can be cultivated by taking some time for yourself. These beliefs are helpful for me to remember on walks, in the car, and out in nature.

4. Ask where the beliefs originated. You will often find that the beliefs you hold are not yours. These beliefs are not something you have learned from your parents or caregivers, but they are part of your childhood. Many beliefs are shared by society at a collective level.

5. You can now see the source of your beliefs and make a decision about whether you want to believe them or not. My approach was to not try to change the beliefs, but to recognize that they were outside of me. I knew that the belief was not part of my inner guidance. Then I would choose not to let it hold me back.

It takes time to see through your belief system. The systems are likely to have been there for you for a while. They can be difficult to spot and it takes effort and discipline.

It is crucial to recognize your inner guidance throughout this process. It will never fail you.

Listen to your inner voice, your true essence. You will be able to achieve your highest dreams. It will be the tree who can grow through fences.

12 Powerful Tips To Organize Your Life And Not Feeling Overwhelmed

How To Get Difficult Tasks Done When Things Get Tough

How To Conquer Your Fear Of Failure

How To Get Difficult Tasks Done When Things Get Tough

Calm App Review: Is This App Worth the Subscription Fee?