For awesome day ahead dose of humor can do wonder, with a cup of coffee these funny good morning messages setup your mood for the day. You can also offer laughter treat to your love ones with these funny good morning blessings and quotes by sharing hilarious morning text and images. We’ve compiled some of the top quotes and sayings that capture exactly what you feel like at the beginning of the day. You would like to share these morning quotes to everyone you know , and take a look at good morning quotes for her, for him, for mother, for father.

“A morning coffee is my favorite way of starting the day, settling the nerves so that they don’t later fray.” — Marcia Carrington

“Good morning is a contradiction of terms.” — Jim Davis

“There should be a rule against people trying to be funny before the sun comes up.” — Kristen Chandler

“Morning comes whether you set the alarm or not.” — Ursula Le Guin

Smile right when you wake up because soon enough, you’ll realize it’s not a weekend yet. Good morning!

Good morning! If you think you didn’t have enough sleep last night, don’t worry, you still have your chance to take some mid-day naps later. 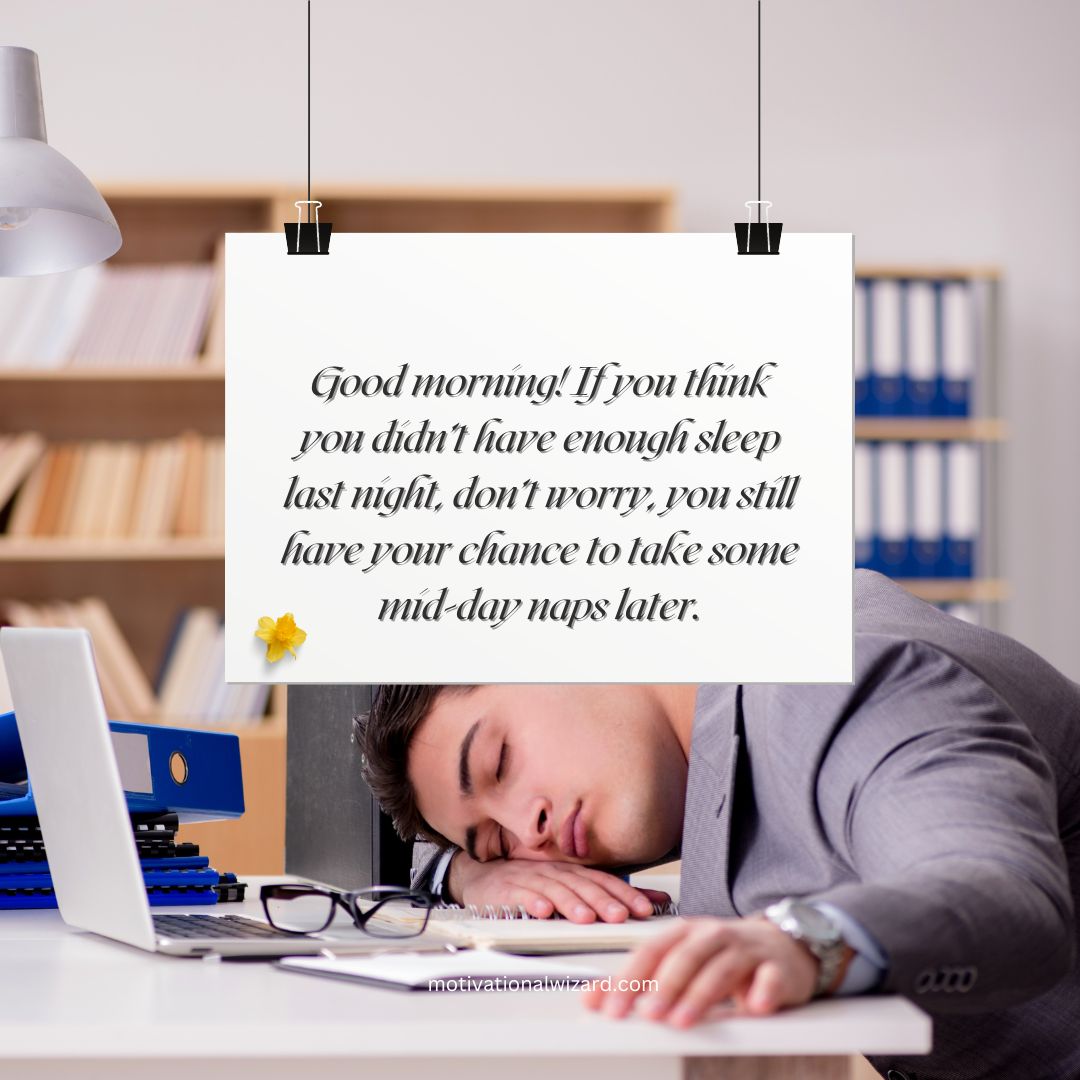 “If you even dream of beating me you’d better wake up and apologize.” — Muhammad Ali

Love is blind until I wake up and see your face in the morning!

If the world was kind to me, it would have slept like an Olympic discipline. Good morning to everyone living in this cruel, unjust world.

“I’m living a dream I never want to wake up from.” — Cristiano Ronaldo

“You feel a little older in the morning. By noon I feel about 55.” — Bob Dole

You May Like To Read | 90 Best Funny Sister Quotes

Good morning, dear. I know you have so many goals to start the day with. Rising early is not one of them.

“One morning I shot an elephant in my pajamas. How he got into my pajamas I’ll never know.” — Groucho Marx

I was the richest person in the world, and then it happened. The alarm bell rang. Good morning! 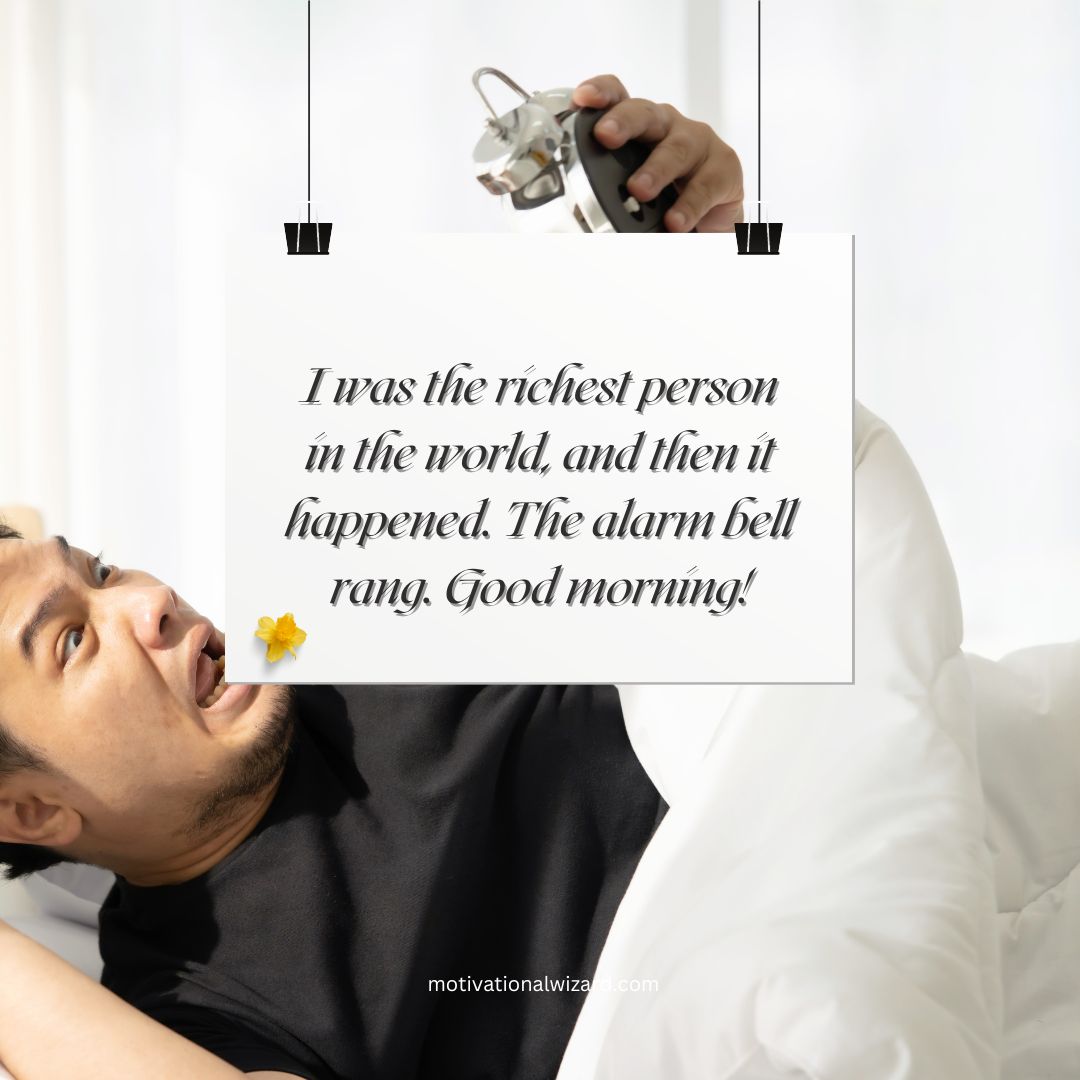 Life is full of stress and troubles. If you want to have a good day, don’t get off your bed. Keep sleeping until you die and stop life happening to you!

“True terror is to wake up one morning and discover that your high school class is running the country.” –Kurt Vonnegut

“Lose an hour in the morning and you will spend all day looking for it.” — Richard Whately

Always harbor positivity in your mind because you will never find it in the real world. Good morning. Have a great day!

The saddest part of the morning is waking up realizing it’s not a holiday. Gonna spend the whole day with the same old routine. Good morning!

Sending you a good morning message in the wake of the day and hoping it’s not the only GOOD you see today.

“Every morning I get up and look through the Forbes list of the richest people in America. If I’m not there, I go to work.” — Robert Orben

“The average, healthy, well-adjusted adult gets up at seven-thirty in the morning feeling just plain terrible.” — Jean Kerr

“The first thing I do in the morning is brush my teeth and sharpen my tongue.” — Dorothy Parker

“Progress isn’t made by early risers. It’s made by lazy men trying to find easier ways to do something.” — Robert Heinlein

“Everyone wants me to be a morning person. I could be one, only if morning began after noon.” — Tony Smite

“It’s okay to look at the past and the future. Just don’t stare.” — Benjamin Dover

“It sounds plausible enough tonight, but wait until tomorrow. Wait for the common sense of the morning.”– H.G. Wells

“Why do they call it beauty sleep, when you wake up looking like a troll!”

“Every single day I wake up and make up my mind that I am going to work really hard. Then my mind laughs at me and says ‘Good joke.’ Then we laugh for some more time and I go back to bed.” — Gehenna Toss

“Sometimes I wake up and think I should start wearing a beret, but I don’t do it.” — Mitch Hedburg

“Moist groaned. It was the crack of seven and he was allergic to the concept of two seven o’clocks in one day.” — Terry Pratchett

“I hate when I dream of alarm clocks going off.” — Jarod Kintz

“I have measured out my life with coffee spoons.” — T. S. Eliot

“Yield to temptation. It may not pass your way again.” – Robert A. Heinlein

“Until you walk a mile in another man’s moccasins you can’t imagine the smell.” – Robert Byrne

“Every morning is a battle between the superego and the id, and I am a mere foot soldier with mud and a snooze button on her shield.” Catherynne Valente

“The brain is a wonderful organ; it starts working the moment you get up in the morning and does not stop until you get into the office.” Robert Frost

“I love a woman with a head on her shoulders. I hate necks.” – Steve Martin

“I found there was only one way to look thin: Hang out with fat people.” – Rodney Dangerfield 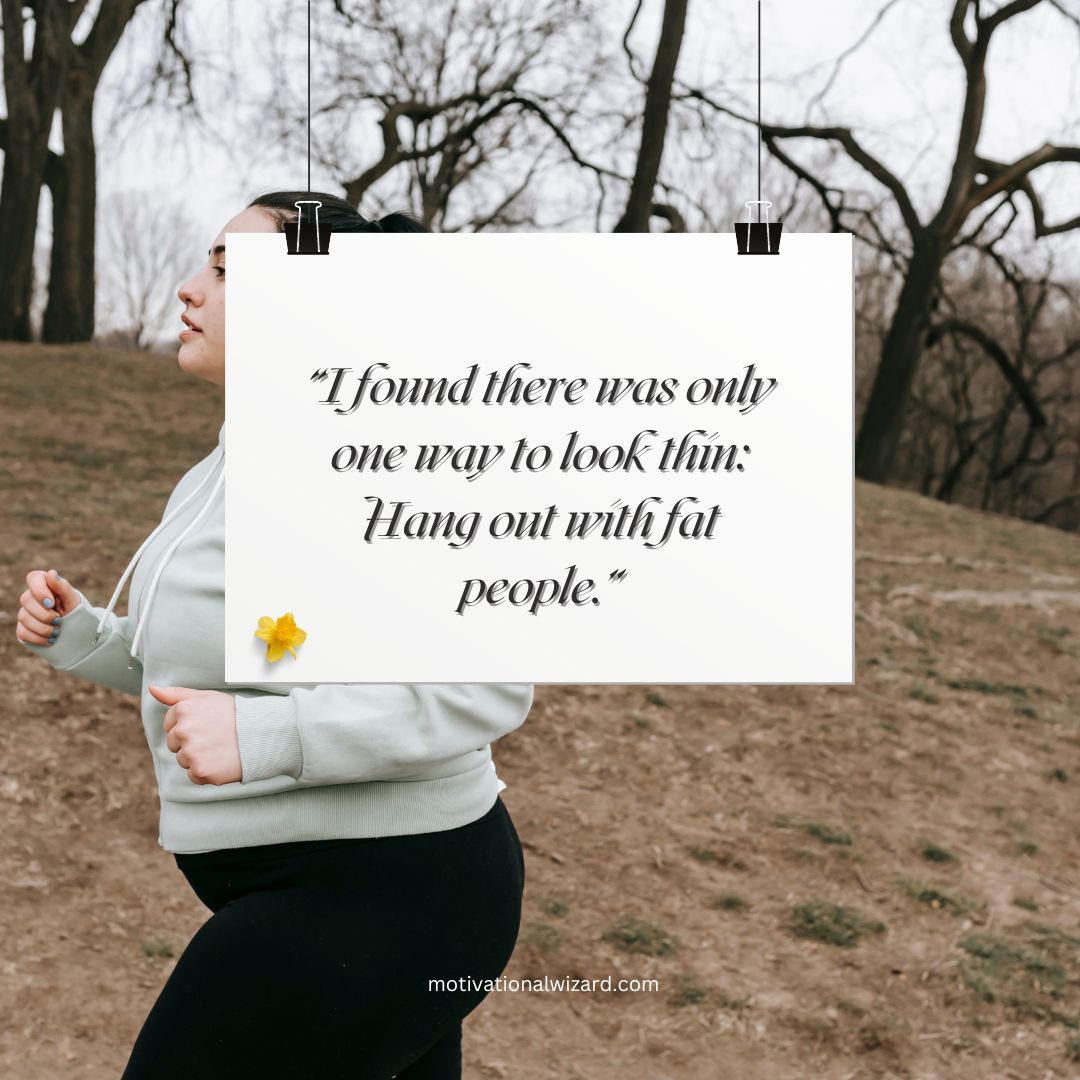 “Afternoons are hard. Mornings are pure evil from the pits of hell, which is why I don’t do them anymore.” Rachel Caine

“Morning comes whether you set the alarm or not.” Ursula K. Le Guin

“Do not take life too seriously,You’ll never get out of it alive.” – Elbert Hubbard

“The lawyer’s first thought in the morning is how to handle the case of the ringing alarm clock.” – Edward Packard, Jr.

“Wine is constant proof that God loves us and loves to see us happy.” – Benjamin Franklin

“One advantage of talking to yourself is that you know at least somebody’s listening.” – Franklin P. Jones

“The first thing I do in the morning is brush my teeth and sharpen my tongue.” — Dorothy Parker

“My routine is to ride that snooze button as far as it will take me, take a quick shower, get dressed in the dark and bolt out the door.” – Willie Geist

It was a dream where you and I were spending some time together. Then the alarm clock interfered, and thank God for saving me!

“A day without sunshine is like, you know, night.” – Steve Martin

“When I wake up in the morning, I feel like a billionaire without paying taxes.” Ernie Banks 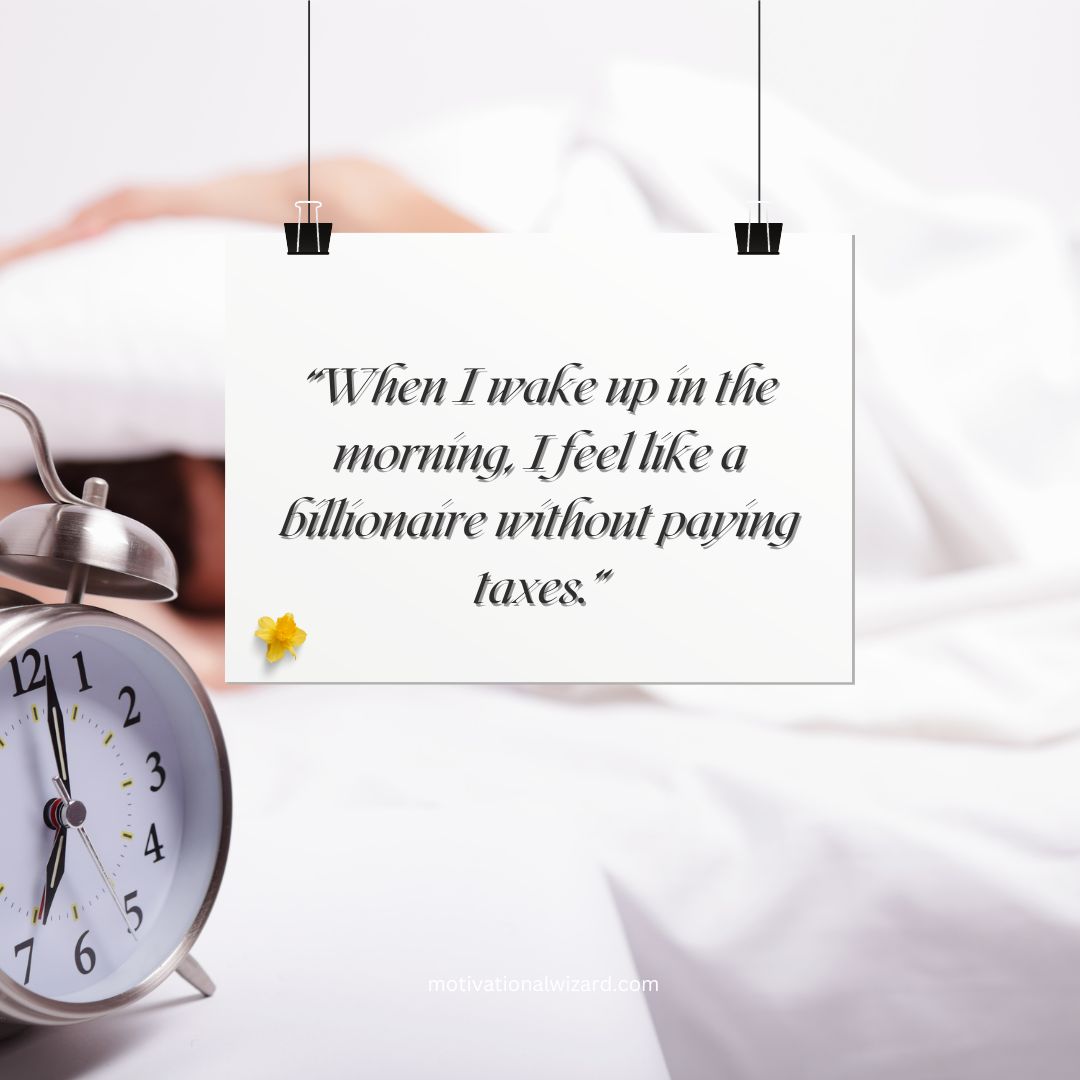 “Coffee is a language in itself.” – Jackie Chan

“When we talk to God, we’re praying. When God talks to us, we’re schizophrenic.” – Jane Wagner

“Coffee chatter is my morning cup of therapy.” —Adrienne Posey

“I’m about to get my grind on. My coffee grind. LIke a true hustler.” – Jarod Kintz

“He was like a cock who thought the sun had risen to hear him crow.” – George Eliot

“I would rather spend one lifetime with you, than face all the ages of this world alone.” —J.R.R. Tolkien

“Even bad coffee is better than no coffee at all.” – David Lynch

“The more you praise and celebrate your life, the more there is in life to celebrate.”

“Anytime you see a turtle up on top of a fence post, you know he had some help.” – Alex Haley

“All generalizations are false, including this one.” – Mark Twain

“My one regret in life is that I am not someone else.” – Woody Allen

“You have a message: wake up you lazy”.

Don’t make me rise so early by sending good morning texts. I want to dream more about you and me.

“You see much more of your children once they leave home.” – Lucille Ball

“There’s no present. There’s only the immediate future and the recent past.” – George Carlin

Wake up and welcome one more unproductive, leisurely day that comes with nothing for you but leaves with a promise of another similar one.

“Do you wake up as I do, having forgotten what it is that hurts or where, until you move?” – Jeanette Winterson

“I have a memory like an elephant. I remember every elephant I’ve ever met.” – Herb Caen

“My fake plants died because I did not pretend to water them.” – Mitch Hedberg

I was about to say ‘shut up and go to sleep’ to all the early risers, but it’s not socially acceptable. So, good morning! “Miami Beach is where neon goes to die.” – Lenny Bruce

“No! I’m not ready, this is still my first cup of coffee!” – Anthony Liccione

“If at first you don’t succeed… so much for skydiving.” – Henny Youngman

“I feel sorry for people who don’t drink. When they wake up in the morning, that’s as good as they’re going to feel all day.” — Dean Martin

“I would rather wake up in the middle of nowhere than in any city on earth.” — Steve McQueen

“The depressing thing about tennis is that no matter how good I get, I’ll never be as good as a wall.” – Mitch Hedberg

“I like long walks, especially when they are taken by people who annoy me.” – Fred Allen

“I never said most of the things I said.” – Yogi Berra

“Morning will come, it has no choice.” — Marty Rubin

“You feel a little older in the morning. By noon I feel about 55.” — Bob Dole

“Every book is a children’s book if the kid can read.” – Mitch Hedberg

“In the morning, I woke like a sloth in the fog.” — Leslie Connor

“People always ask me, ‘Were you funny as a child?’ Well, no, I was an accountant.” – Ellen DeGeneres

“True friends stab you in the front.” – Oscar Wilde

“No man goes before his time – unless the boss leaves early.” – Groucho Marx”

“I’m sorry for people who don’t drink. They wake up in the morning, that’s as good as they’re going to feel all day.” — Frank Sinatra

“Always do whatever’s next.” – George Carlin

“Life is hard. After all, it kills you.” – Katharine Hepburn

“Mornings are almost clean slates. I say almost because the residue of yesterdays is sometimes stuck on them.” — Medeia Sharif

“Some mornings I just feel like breaking the damn alarm but then one thing always stops me. I paid hundreds of dollars to buy my phone.” — Job Might

“I am a marvelous housekeeper. Every time I leave a man, I keep his house.” – Zsa Zsa Gabor

“To be or not to be. That’s not really a question” – Jean-Luc Godard

“My routine is to ride that snooze button as far as it will take me, take a quick shower, get dressed in the dark and bolt out the door.” — Willie Geist

“Mornings are pure evil from the pits of hell, which is why I don’t do them anymore.” — Rachel Caine

“A day without laughter is a day wasted.” – Charlie Chaplin

“Sometimes I wake up and think I should start wearing a beret, but I don’t do it.” — Mitch Hedburg

“Morning comes whether you set the alarm or not.”  — Ursula K. Le Guin 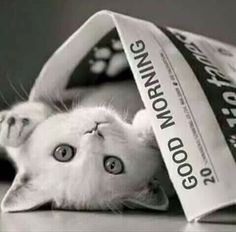 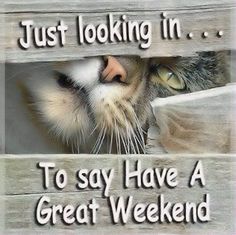 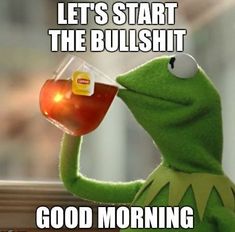 Good Morning Quotes For Her

Good Morning Quotes For Him